The Syrian conflict, which began in 2011, has resulted in the largest refugee crisis since World War II, with millions of Syrian refugees fleeing to neighboring countries including Lebanon, Jordan, and Turkey1. Syrian refugees have also fled to Europe, with many crossing the Mediterranean Sea in order to reach European Union-member nations, mainly Greece, then traveling north to countries such as Germany and Sweden. Syria’s pre-war population of 22 million people has been reduced to approximately 17 million, with an estimated 5 million having fled the country2, 3, and more than 6.5 million displaced within Syria 4. As fighting has continued across the country, an increasing number of health facilities have been heavily damaged or destroyed by attacks, leaving thousands of Syrians without access to urgent and essential healthcare services5.

The Syrian Arab Republic (Syria) is located in the Middle East, bordering Lebanon, Turkey, Iraq, Jordan, and Israel; it is also bordered by the Mediterranean Sea to the west (Figure 1). Syria is largely a semiarid or arid plateau, and encompasses various mountain ranges, desert regions, and the Euphrates River Basin6. 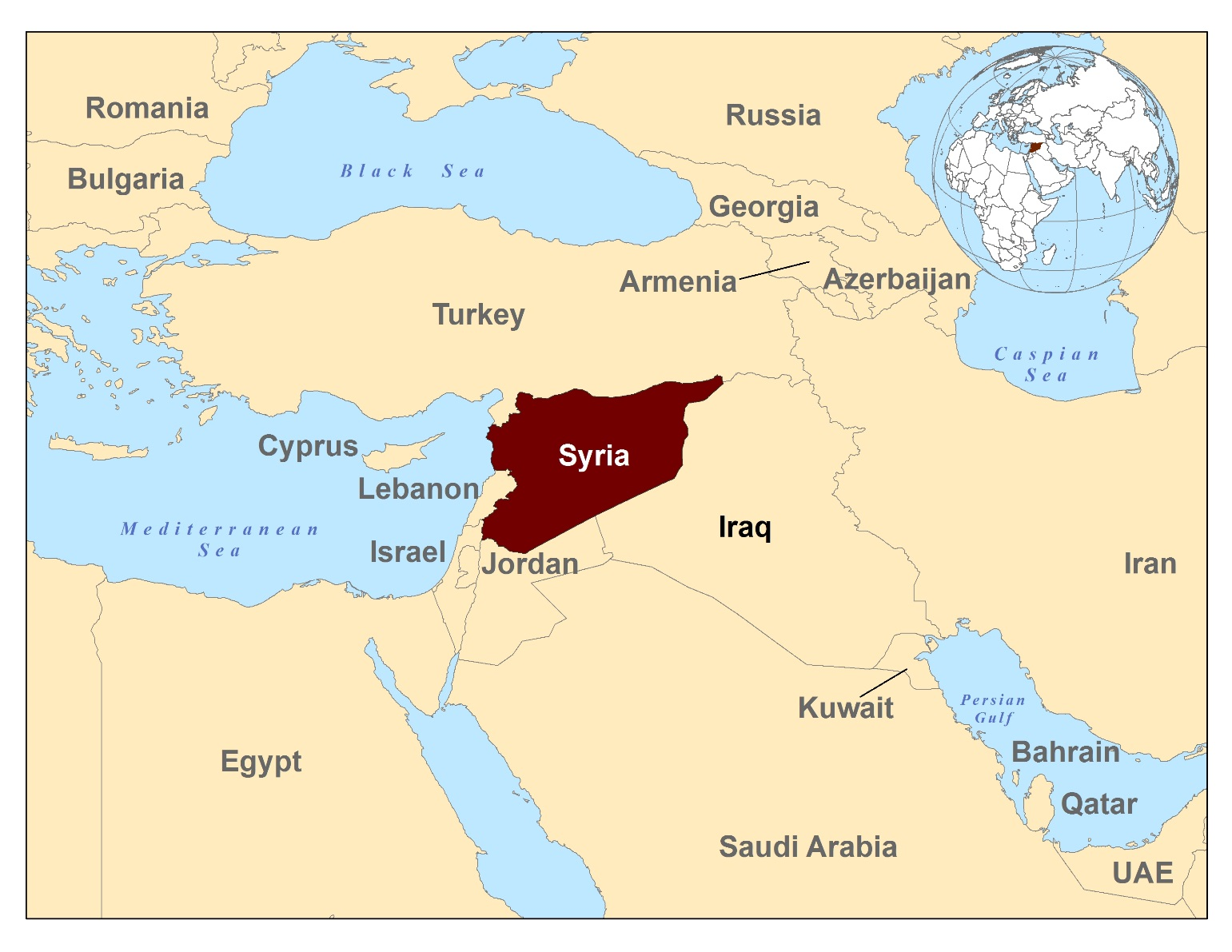 Approximately 90% of Syrians are of Arab descent7,. The largest ethnic minority in Syria is Kurdish, which constitutes roughly 9% of the total population. Kurds primarily reside in northern and northeastern Syria. Kurds have faced marginalization and persecution both in Syria and throughout the Middle East, where they are the fourth largest ethnic group, with sizable populations in Iraq, Iran, and Turkey8. The remaining 1% of the Syrian population is of Armenian, Circassian, and Turkoman descent6, 7.

Arabic, the official language of Syria, is spoken by approximately 90% of Syrians. Most Syrians speak colloquial Arabic, and read and write Modern Standard Arabic9. Circassian, Kurdish, Armenian, Aramaic, Syriac, French, and English are also spoken. French and English are widely understood, particularly among educated groups in urban areas6. While many Syrian refugees have a basic knowledge of English, relatively few are proficient9.

Prior to the conflict, Syria had one of the strongest education programs in the Middle East, with 97% of primary-school-age children attending school 10. The collapse of the Syrian education system is most notable in areas of intense violence. Less than half of all children in Al-Raqqa, Idlib, Aleppo, Deir Ezzor, Hama, and Daraa currently attend school. School attendance in Idlib and Aleppo has plunged below 30% 10. An estimated 500,000 to 600,000 Syrian refugee children in the Middle East and North Africa currently have no access to formal education 10. However, it is likely that the number of children with no access to learning is considerably higher, as these figures only account for registered refugees 10.

The typical Syrian family is large and extended. Families are close-knit, and protecting the family’s honor and reputation is important. Like many Arab societies, Syrian society is patriarchal. Women are believed to require protection, particularly from the unwanted attention of men. Generally, an elderly male has ultimate decision-making authority and is seen as the family protector9.

Women, especially from religiously conservative families, are typically responsible for cooking, cleaning, and caring for children, while men are typically responsible for supporting the family financially. Among the upper classes, women are well-educated and often work outside the home. However, women from middle-class urban and rural households are expected to stay home and care for children, while women from poor families often work in menial, low-wage jobs9.

Islam is practiced by 90% of the population. Approximately 74% of the total population are Sunni and 16% are Shia (namely Alawite and Ismaili)9. Minority religious groups include Arab Christians (Greek Orthodox and Catholic), Syriac Christians (also known as Chaldeans), Aramaic-speaking Christians, and Armenian Orthodox and Catholics9. These minority groups account for 10% of the population. There is also a small Kurdish-speaking Yazidi community9.

Syrians are familiar with and tend to engage with the Western medical model. Syrians often seek immediate medical care for physical injury or illness, are anxious to begin treatment, and will generally listen to their physician’s advice and instructions. They tend to see physicians as the decision makers, and may have less confidence in non-physician health professionals. Although most Syrians are familiar with Western medical practices, like most populations, they tend to have certain care preferences, attitudes, and expectations driven by cultural norms, particularly religious beliefs, and expectations 9. While many Syrians may have similar preferences due to shared cultural norms and past experiences, it is important to recognize that individuals in this population may have diverse preferences, attitudes, and expectations toward healthcare.

For example, Syrian patients or their families might be more likely than the general U.S. patient population to:

When possible, providers should attempt to provide refugee patients with translators who are of the same ethnic background. In certain circumstances, gender concordance with translators may be of importance for some patients.

For more information about the orientation, resettlement, and adjustment of Syrian refugees visit the Cultural Orientation Resource CenterExternal.