Somalia is considered a globalized nation, with more than 1 million Somalis currently living outside the country. Somalis are largely concentrated in three areas: the Horn of Africa and Yemen, Gulf States, and Western Europe and North America [15]. Nearly two-thirds of all Somalis living outside Somalia live in neighboring countries, namely Kenya, Ethiopia, Djibouti, and Yemen [16]. In Europe, the United Kingdom is home to the largest Somali community, followed by the Netherlands, Norway, Sweden, and Denmark [15]. A growing number of Somalis have also settled in Switzerland, many of whom arrived as asylum seekers [16]. Lastly, Malaysia and Australia have also seen an influx of Somali immigrants in recent years [15]. In the United States, Minnesota is home to the largest Somali community, with the majority residing in the Minneapolis-St. Paul metropolitan area (Hennepin and Ramsey counties), as well as St. Cloud and Rochester [17]. Many Somali refugees and immigrants have also settled in the Seattle metropolitan area, as well as Columbus (Ohio) and the surrounding area [14, 18].

As of December 2016, the United Nations High Commissioner for Refugees (UNHCR) estimated that more than 1.5 million Somalis were internally displaced. Additionally, as of January 2018, more than 875,000 Somalis were registered with UNHCR as refugees in Africa and the Middle East [19, 20]. However, this figure only accounts for registered refugees, and therefore likely underestimates the scale of the refugee crisis in the Horn of Africa. Kenya, Ethiopia, and Yemen host the largest numbers of Somali refugees. Somali refugees have also fled, in smaller numbers, to Djibouti, Egypt, Eritrea, Uganda, and South Africa [20].

Kenya hosts the largest number of Somali refugees (more than 313,000 as of April 2017), most of concentrated in the Dadaab Refugee Complex, in Garissa County near the Somali border. Established in 1991 to provide refuge for families fleeing the Somali Civil War, Dadaab consists of four camps: Dagahaley, Hagadera, Ifo, and Ifo 2. A fifth camp, Kambioos, was closed in February 2017. As of April 30, 2017, UNHCR estimated that approximately 245,000 Somali refugees live in Dadaab [20]. Other sources estimate that between 300,000 and 350,000 Somali refugees reside in Dadaab, as many refugees in the complex are not registered with UNHCR [21, 22]. Some camp residents have lived in Dadaab for more than 20 years, while many others were born in the camp and have never set foot in Somalia. Additionally, as of April 2017, approximately 40,000 Somali refugees were living in Kakuma Refugee Camp, located in northwest Turkana County, and more than 30,000 Somali refugees were living in Nairobi [20].

Resettlement to the United States

Resettlement of refugees from Somalia first began in 1990. The number of Somali refugee arrivals nearly tripled between 2011 and 2014. Since 2014, Somali refugee arrivals have remained consistent at roughly 9,000 each year (Figure 2) [25]. From 2010 to 2016 (fiscal years, October 1 to September 30), more than 47,000 Somali refugees arrived in the United States, with the majority of arrivals under 45 years of age and roughly equal numbers of male and female (Figure 3) [25]. During this time, Minnesota and New York welcomed the largest numbers of Somali primary refugee arrivals, followed by Texas, Arizona, Ohio, and Washington (Figure 4) [26].

Following initial resettlement in the United States, many Somali refugees relocate to states with well-established Somali communities. Minnesota receives a significant number of secondary refugee arrivals, with the largest numbers coming from New York and Texas. From 2010 to 2016, the Minnesota Department of Health (Refugee Health Program) was notified of 3,740 secondary arrivals [17]. However, the true number of secondary Somali arrivals is likely much higher, as the state is not always notified. The majority of secondary arrivals in Minnesota settle in Hennepin, Stearns, and Kandiyohi counties, all of which have well-established Somali communities [17]. 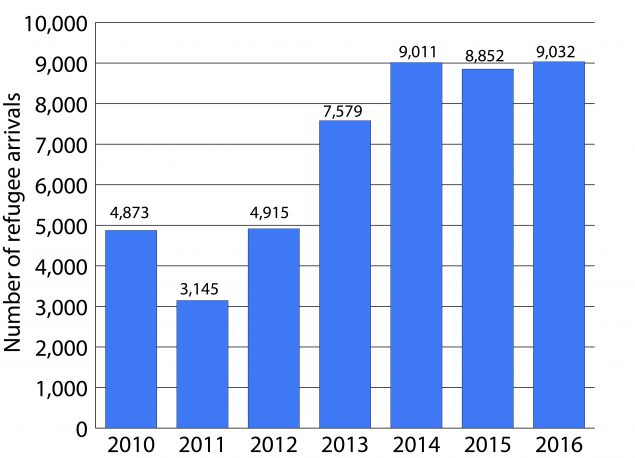 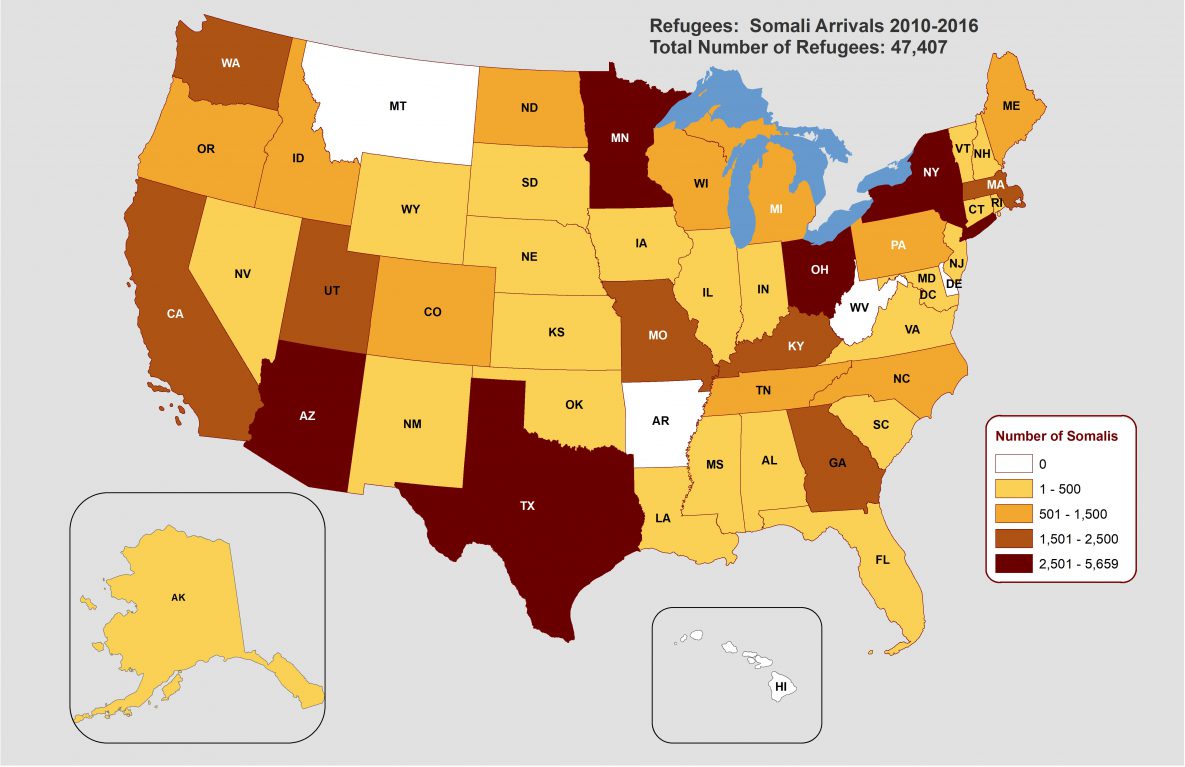 The remaining 17,139 refugees were resettled in 34 different states across the United States, as well as the District of Columbia [26].
Source: Worldwide Refugee Admissions Processing System (WRAPS) [26].