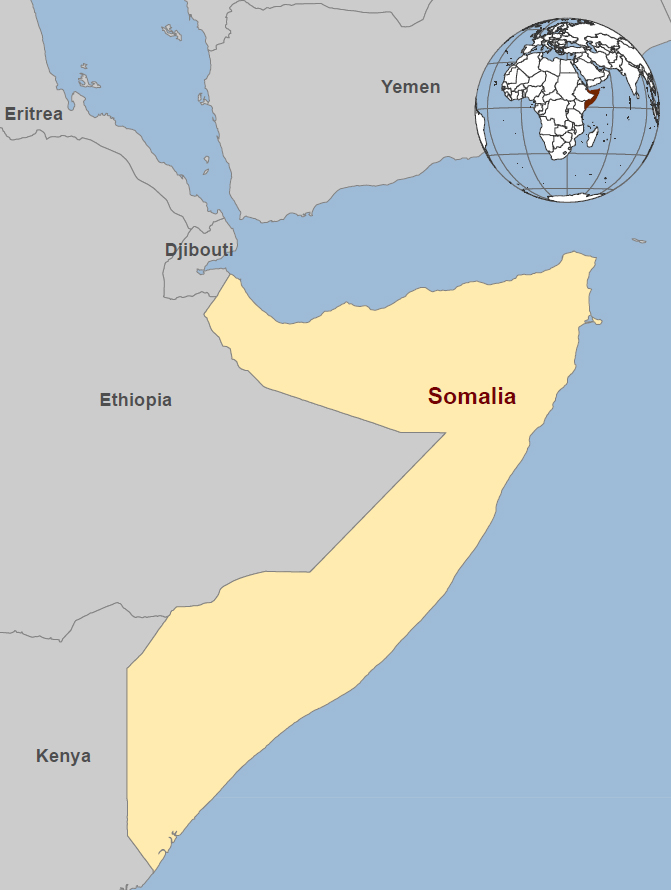 Figure 1: Map of the Horn of Africa

After gaining independence from Italy and Great Britain in 1960, Somalia was a stable nation. However, political instability in the early 1990s resulted in a protracted humanitarian crisis and an ongoing, territorial civil war. Recent elections have been largely peaceful and shown signs of progress, but Somalia remains deeply divided by insurgent groups and rival militias. The civil war, coupled with extreme famine (particularly in rural areas), unequal distribution of aid, and poor economic prospects, has led to the mass exodus and diaspora of Somalis worldwide [1].

The Federal Republic of Somalia (hereafter referred to as Somalia), is located in Eastern Africa and is part of the Horn of Africa, a large peninsula that juts into the Arabian Sea (Figure 1). Somalia borders Kenya, Ethiopia, and Djibouti, as well as the Gulf of Aden and the Indian Ocean. Although Somalia has a largely desert climate, parts of the country experience seasonal monsoons. The country is prone to recurring droughts, frequent dust storms in the eastern plains, and flooding during the rainy season. Famine, deforestation, overgrazing, soil erosion, and desertification have become major issues in recent decades [2].

Ethnic Somalis are unified by culture, language, religion (Islam), and common Samaale ancestry. Persons of Somali origin account for approximately 85% of the population, while minority ethnic groups account for the remaining 15% [2]. The largest ethnic minority in Somalia is the Somali Bantu, whose ancestral origins include, among others, the Makua, Yao, Ngindo, and Nyasa of Tanzania, Mozambique, and Malawi [3]. Many Bantu trace their origins to ancestors from these southeast African tribes who were enslaved and brought to Somalia during the 18th century [3]. Minority ethnic groups also include Bravanese (Barawa) and Rerhamar (Arab descent); Bajuni (originating from the East African coast); as well as the Galgala, Tumal, Yibir, Gaboye, and Eyle [4].

Ethnic groups in Somalia can be further divided into clans. Clans are socially and politically important, and membership is determined by paternal lineage [5, 6]. Majority (Somali origin) members (or “nobles”) belong to one of four patrilineal clans: Darod, Hawiye, Dir, and Rahanweyn (Digil-Mirifle). These clans largely dominate modern government and politics, as well as the economy and urban life [5]. Somalia’s minority clans are incredibly diverse, and are defined not solely by ethnicity, religion, or linguistic variances, but also by social and historical distinctions [5]. Minority clans are derived from minority ethnic groups. Minority clans include Bantu, Bravanese (Barawan), Bajuni, Eyle, Galgala, Tumal, Yibir, and Gaboye [4]. Minority clans often live in poverty, and many suffer from discrimination and exclusion. Insufficient numbers of health centers in regions where minorities live and lack of public transit infrastructure often prevent minorities from accessing critical health care services [4].

Clans are a very sensitive topic for many Somalis. Enduring tension between rival clans has been a major factor in the ongoing conflict in Somalia. Clinicians should avoid discussing clans with Somali patients as many may find it disrespectful or offensive [6].

Somali is the primary official language. There are two main Somali dialects: Standard Somali and Digil/Raxanweyn Somali. Standard Somali is spoken by most Somalis, while the Digil/Raxanweyn dialect is spoken primarily in Shabelle and Juba river valleys in the south [7]. However, Standard Arabic is also an official language (according to the Transitional Federal Charter) [2]. Italian and English are common, and Swahili is also spoken in regions in southern Somalia [2, 7]. Indigenous languages include Maay, Oromo, Borana-Arsi-Guji, Dabarre, Garre, Jiiddu, Mushungulu, Tunni, and Boon [8].

Civil war resulted in a complete breakdown of the formal education system in Somalia. Somalia has one of the world’s lowest enrollment rates for primary school-aged children, where as few as 25% of children have access to primary education, and secondary school enrollment is estimated at 6% [9]. Of note, school enrollment in Somalia is substantially higher for boys than girls [7]. Educational opportunities for Somalis are also limited in countries of asylum. In the Dadaab Refugee Complex in Kenya, access to quality education is severely limited. The number of school-aged children in Dadaab far exceeds the capacity of schools, and schools lack adequately trained teachers and learning resources [10].

Literacy among Somalis is low. Among adults (15 years of age or older), male literacy is approximately 49.7%, while literacy among women is substantially lower at 25.8% [9].

The provisional federal constitution of Somalia recognizes Islam as the state religion and requires that all laws must comply with the general principles of sharia [11]. Nearly all Somalis are Sunni Muslim, and it is estimated that less than 1% of the total population belongs to other religious groups (e.g. Christian, Shia Muslim) [2, 11].

Somali society tends to be patriarchal, and men and women are generally separated in most spheres of life. Men often act as the head of the household and work outside the home, while women usually manage the home and raise children. Family is extremely important; Somali culture is more focused on the family than on the individual. It is not uncommon for extended families to live together [6]. Elders are venerated within the Somali community, and their counsel is sought for personal and community issues [6]. In some communities, arranged marriages may be common. Some Somalis may practice polygamy; men may have multiple wives, if they can afford to do so [6].

The majority of Somalis, particularly those who have lived in urban areas, have had some experience with Western medicine. Providers should ask new arrivals about past experiences with Western medicine, as well as their opinions of Western medical practices [12]. However, some Somali refugees may be unfamiliar with routine preventative care, such as prenatal or well-child care [6]. Additionally, many Somalis have had experience with traditional healers. Traditional healers use a variety of methods including fire-burning (a procedure where a stick from a special tree is heated and applied to the skin to cure illness), herbal remedies, and prayer. They employ these methods to treat a variety of illnesses such as viral hepatitis, measles, mumps, and varicella (chickenpox), and may be familiar with treating hunchback, facial droop, and broken bones. Traditional doctors are believed to have the ability to cure illnesses caused by spirits [6].

Like most populations, Somalis tend to have specific care preferences, attitudes, and expectations driven by cultural norms and religious beliefs [6]. However, individual interpretations of Islam and diverse cultural practices require healthcare providers to address views and preferences of each refugee [13].

While there are no universal Islamic healthcare practices or preferences, Somali Muslims (who account for roughly 99% of the Somali population) may be more likely than the general US patient population to:

*Halal is Arabic for “lawful” or “permitted” and refers to how meat is butchered in accordance with Islamic law.

When possible, providers should ask patients if they prefer an interpreter who is of the same ethnic background or gender.

For more information about the orientation, resettlement, and adjustment of Somali and Somali Bantu refugees, please visit EthnoMedExternal.