Breast cancer was the most common cause of cancer morbidity among Iraqi refugee women screened outside of Iraq. From 1985-2001 breast cancer was the leading cause of death among Arab-American women in Michigan 31. Although many Arab-American women indicated that their health insurance covered cancer screening, they either had low screening rates or delayed screening 32 33. Availability of health insurance coverage may not be the only barrier to timely cancer screening. Other barriers may include transportation, language, and beliefs about cancer causation and prevention 32 33. Health care providers should be aware of the health perspectives of newly resettled Iraqi refugees and should provide cancer education materials in Arabic to encourage timely screening.

Blood pressure is measured during the visa medical exam and during domestic medical examinations in the United States. Although two or three measurements are required to diagnose an individual with hypertension, single measurements may be used to estimate prevalence of hypertension in a population. In Jordan, of 13,299 US-bound screened Iraqis ≥15 years of age, 33% (4,382) had hypertension. An additional 42% (5,565) of Iraqi refugees were pre-hypertensive 28. Of Iraqi refugees ≥15 years of age arriving to the US from 2008- 2013, 10% self-reported having a history of hypertension.

Smoking is widely accepted among Iraqis, particularly Iraqi men (Figure 6). Of Iraqi male refugees ≥15 years old who arrived in the US from 2008 – 2013, 40% had a history of smoking and 31% were current smokers.  Smoking among Iraqi women was less common than among Iraqi men. 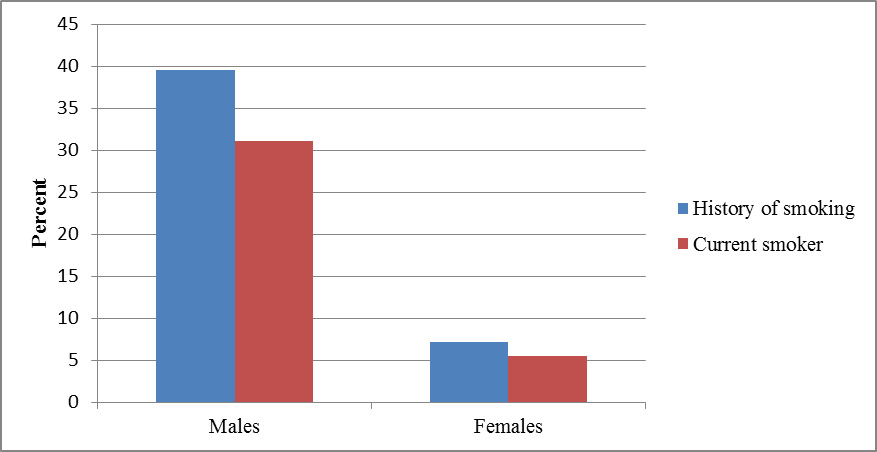 Congenital and genetic disorders are a concern among the Iraqi population. Of the 18,990 screened refugees, 1.7% (325) had congenital disorders: .1% (16) had congenital cardiovascular defects, 0.2% (33) had glucose-6-phosphate dehydrogenase (G6PD) deficiency, 0.02% (4) had sickle cell disease, 7 (0.03%) thalassemia, and 116 (0.6%) congenital hemangioma. The Iraq Family Health Survey reported that 37% of Iraqi women are married to their cousins and 23% to other relatives, which may partially account for the high prevalence of certain recessively inherited disorders 9 28. Health care providers serving Iraqi families should inquire about consanguinity and become familiar with the genetic disorders common among Arabs, such as G6PD deficiency, sickle cell disease, and thalassemia 28.

Iraqi refugee children specifically do not appear to be at higher risk of lead poisoning than US children. Only 1.3% of Iraqi children ≤5 years of age screened in San Diego during 2008–2009 had elevated blood lead levels (≥10 µg/dL) 26. However, refugee children in general are thought to be at higher risk for lead poisoning, not only because anemia and malnutrition increase lead absorption, but also because of an increased risk for exposure to products containing lead.