In early 2014, the International Organization for Migration (IOM) noted high rates of splenomegaly in refugees undergoing screening in Uganda. Cases were reported to be primarily asymptomatic, clustered in families, and exclusively occurring in refugees from Democratic Republic of the Congo (DRC). This clinical finding was particularly common in the Kyangwali, a Resettlement Camp in Uganda, where it was noted that 16% of refugees had splenic enlargement. IOM, with the assistance of the U.S. Centers for Disease Control and Prevention (CDC), began offering additional diagnostic testing and empiric treatment for refugees with palpable splenomegaly during pre-departure medical examinations to better understand the increase in cases. Clinical evaluation is currently taking place to identify with certainty the etiology and to ascertain potential causes such as acute malarial, schistosomiasis, leishmaniasis, hepatic disease (i.e., hepatitis C), and non-infectious etiologies (such as thalassemias).

Although etiology is currently unknown, one potential cause is chronic, repeated infections with malaria (when severe, termed “Hyperreactive Malaria Splenomegaly (HMS) Syndrome”). While the investigation is ongoing, all refugees with positive malaria tests are receiving treatment for acute malaria. In addition, all refugees will be presumptively treated with artemether-lumefantrine (which will treat blood stage malaria parasite) immediately before departure to the United States.

Malaria-associated splenomegaly and HMS are complications of recurrent malaria infections. Although the specific pathophysiology is unknown, evidence suggests that repeated exposure to malaria antigens elicits an exaggerated immune response, excessive IgM production, and eventual splenic deposition that results in splenomegaly. Patients with HMS may not have active signs of malaria or detectable parasite in their blood if tested for malaria (e.g., may have negative blood smears or rapid malaria tests [RDTs]). Symptoms of HMS can be quite variable and may consist solely of abdominal fullness or palpable splenomegaly. However, the degree of splenomegaly, at times, can be severe, reaching lengths of 20 cm and leading to fatal complications, if left unmanaged. Fatal complications include splenic rupture following minor trauma or secondary bacterial infections due to underlying hematological abnormalities (i.e., severe hypersplenism, leukopenia).

All refugees who underwent HMS therapy prior to departure should receive follow-up testing after arriving in the United States. These patients should receive laboratory testing, including repeat IgM testing and repeat ultrasonography. In addition, all refugees who have presumed malaria-associated splenomegaly or HMS should be tested for G6-PD. If the G6-PD is normal, patients should be treated with a 2-week course of primaquine for the potential hepatic phase of non-falciparum malaria. Persons with a large spleen should also be reminded not to participate in physical activities that can cause trauma (i.e., contact sports).

Based on the results of the ongoing investigation, CDC may issue additional recommendations for the monitoring and/or treatment of relocated refugees with HMS. For further information, see CDC guidelines regarding diagnostic testing for malaria, as well as post-arrival guidance on the management of malaria and its complications in refugee populations.

As in other refugee populations, anemia in the Congolese is frequently multifactorial. In contrast, however, Congolese are expected to have higher rates of sickle cell disease (SCD) and trait. The DRC, along with Uganda, Cameroon, Gabon, Ghana, and Nigeria, are considered to have the highest overall burden of SCD in Africa 22. The overall prevalence of sickle cell anemia (SCA, including trait and disease) in the DRC is estimated to be between 20–30% 22. In 2010 an estimated 79% (~242,200) of neonates with SCA were born in sub-Saharan Africa, with 2 African countries and 1 Asian country (Nigeria, DRC, and India) representing 57% (~353,500) of the annual number of newborns with SCA globally 22. A significant number of those with SCD and its variants will experience a sickle crisis when they travel to even modest altitudes (>4,400 feet), and this should be considered for those moving to United States cities that are in higher altitudes (e.g., Denver, Salt Lake City) 23. In addition, data from a pilot health assessment conducted in refugee camps in Rwanda in 2012 showed that 5% of refugees had mild, moderate, or severe iron deficiency anemia (unpublished CDC data). Several refugee camps in Rwanda are located at higher elevations (>2,000m); therefore, adjustments for altitude were made by using WHO/CDC criteria for all locations to prevent underestimates of anemia in the Rwanda cohort. Cases of moderate and severe anemia were low (1% and 0.3%, respectively) after hemoglobin values were adjusted for gender, age, and camp elevation. For more information on anemia screening for Congolese refugees, refer to the Congolese Health Conditions to Consider in Post-Arrival Medical Screening of Congolese Refugees: Anemia section of this profile.

Data from a pilot health assessment conducted in Rwanda in 2012 showed a relatively low rate of malnutrition in refugees located in 3 refugee camps, as well as in urban refugees living in Kigali (unpublished CDC data). Of children aged 6–59 months from all Rwanda locations, 5% met the criteria for moderate acute malnutrition. No children in this age group had severe acute malnutrition from any location in Rwanda. Of children aged 5–19 years, 3% met criteria for severe acute malnutrition and 6% met criteria for moderate acute malnutrition. Acute malnutrition as defined by BMI was more prevalent in the camps than among the urban refugee population; however, 55% of adult refugees screened from the urban population were overweight or obese by the same index. Overall, the prevalence of malnutrition among children aged 6–59 months in the Rwanda cohort was lower than rates among other refugee groups resettling from other parts of Africa. Prevalence rates of acute malnutrition (i.e., “wasting”) in children 6–59 months have been as high as 12.3% and 8.2% in certain camp locations in Ethiopia and Kenya, respectively (26). However, since prevalence rates for moderate and severe anemia in the Rwanda cohort were also low (1% and 0.3%, respectively), this suggests a lower risk of overall nutritional deficiencies in this population than in other United States-bound refugee groups. It should be noted that these are Rwanda-specific data only and may not reflect the nutritional status of Congolese refugees resettling from other countries.

Hypertension, dyslipidemia, and diabetes are disproportionately represented in persons of African descent. Data from Congolese patients indicate that this population follows these trends and has high rates of these disorders (Figure 13) 24, 25. 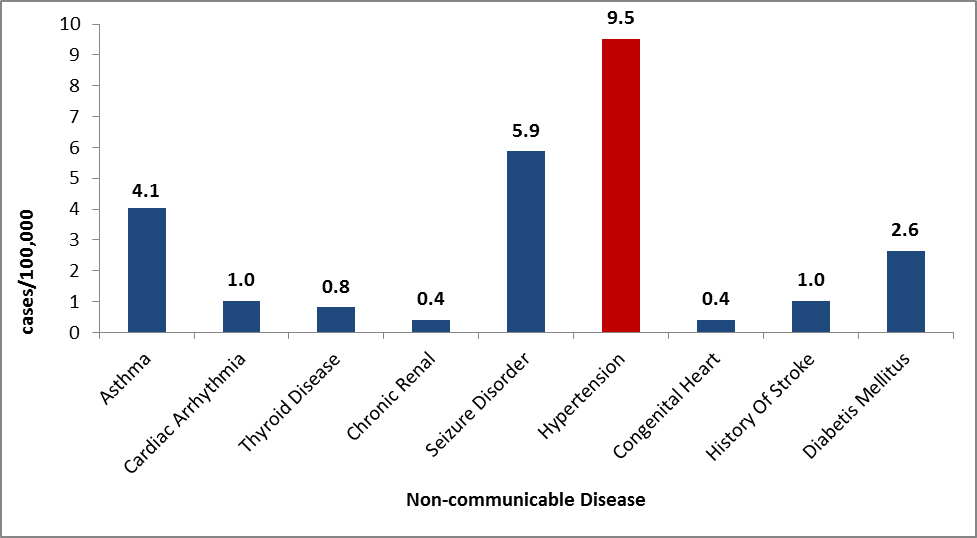