The Democratic Republic of the Congo (DRC, formerly known as Zaire) is located in central Africa and is the largest country by land mass in sub-Saharan Africa 1. For nearly 2 decades, DRC has been divided by armed conflict as a result of the First and Second Congo Wars (1996–1997 and 1998–2003,) and the Kivu Conflicts in eastern DRC (2004–present).

Following the Rwandan genocide in 1994, millions of Rwandan refugees flooded into the eastern DRC. In 1996, Rwanda and Uganda invaded eastern DRC in an effort to locate the remaining perpetrators of the genocide, who were believed to be hiding in camps there. A coalition comprised of the Ugandan and Rwandan armies, along with Congolese opposition leader Laurent Kabila, eventually defeated Congolese dictator Mobutu Sese Seko and his army, and Laurent Kabila became president of DRC, ending the First Congo War in 1997. In 1998, President Kabila ordered Rwandan and Ugandan forces to leave the eastern DRC, fearing invasion of the resource-rich territory by the 2 regional powers 1. This move sparked the beginning of the Second Congo War. With the involvement of 9 African countries and more than 20 armed militia groups, the Second Congo War is often referred to as “Africa’s World War” and is considered to be the deadliest global conflict since World War II 2.

Despite the official end of the Second Congo War in 2003, various rebel groups and rogue elements of the Congolese army continue to commit serious human rights abuses in eastern DRC, primarily in the provinces of North and South Kivu, Orientale, and Katanga 2. Kivu province is ethnically diverse, with groups having a history of persecution (primarily the Banyamulenge and Tutsi) making up the majority in the region 2. The Banyamulenge, Congolese of Rwandan origin, have faced a long history of discrimination in DRC and, along with ethnic Tutsi and Hutu from Rwanda, are often denied citizenship and other rights. These groups have also been discriminated against based on their perceived association with Rwandan-backed rebel groups, which many blame for the unrest in the region 2. Other groups, such as the Bembe and Bashi, have also faced persecution on a smaller scale due to their large presence in the conflict area. The ongoing unrest and instability in DRC has been described by the United Nations as one of the world’s worst humanitarian crises and continues to cause hundreds of thousands of displaced persons to seek refuge in neighboring countries, including Burundi, Rwanda, Tanzania, and Uganda 2.

Figure 1: Location of the Democratic Republic of Congo, Burundi, Rwanda, Tanzania, and Uganda 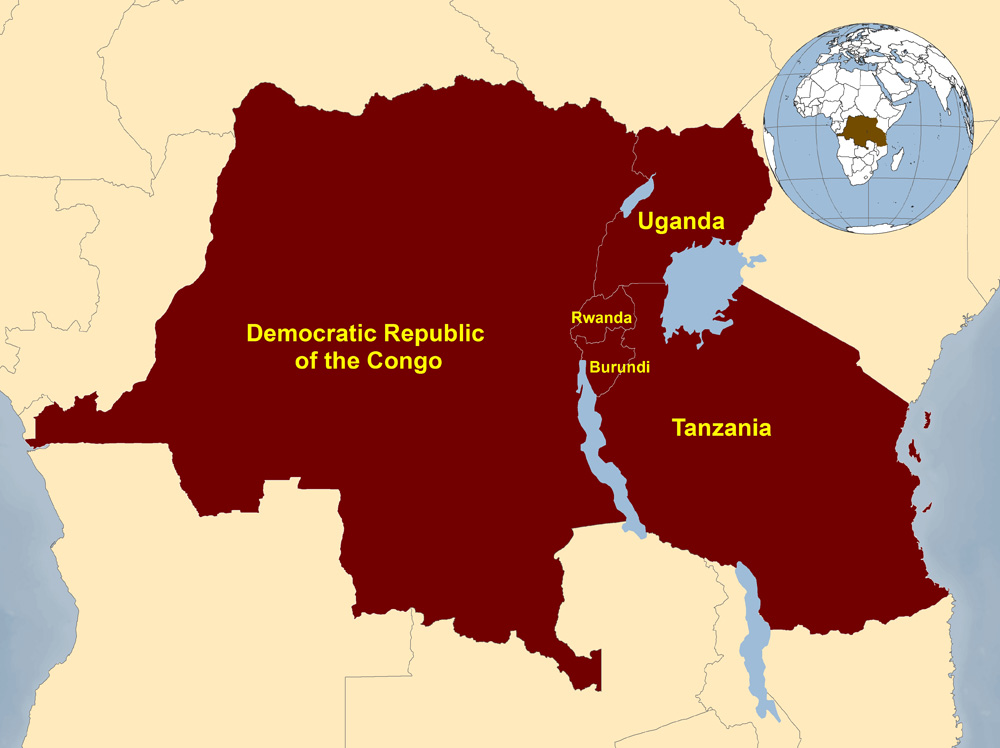 While French is the official language of DRC and 4 national languages are considered to be primary languages (Lingala, Kiswahili, Kikongo, and Tshiluba) 1, the majority of refugees resettling through the United States Refugee Admissions Program (USRAP) will speak Kinyarwanda, because they are from eastern DRC 2. Many Congolese refugees are multilingual, speaking their native language as well as Kiswahili or other regional languages. Refugees are often exposed to English through school and the media; however, proficiency in English is expected to be minimal. Data from surveys conducted by the Resettlement Support Center in Africa (RSC-Africa) show that 59% of Congolese refugees have no oral English skills and an even greater percentage have no ability to read (65%) or write (66%) in English 3. Most Congolese adults arriving through the USRAP will not have had access to secondary education. Data from RSC-Africa show that 70% of Congolese over 18 years of age reported not having a high school diploma or higher level of education. Similar results from an assessment of 416 refugees, conducted by the Centers for Disease Control and Prevention (CDC) and the International Organization of Migration (IOM) (unpublished data), show that 14% of refugees in Rwanda had no formal education at all, 54% had some primary schooling, 31% had a high school diploma, and 1% had a university degree. It is known that girls attend schools at lower rates in DRC, so it is likely that the majority of refugees with no primary or high school education and low literacy levels are female.

Approximately 70% of the general population in DRC is Christian and refugees being referred for US resettlement are overwhelmingly Christian (95%), with 80% of those Christians identifying as Protestant 2. Of these, a large majority identify as Pentecostal and Seventh Day Adventists. Approximately 4% of refugees identify as Muslim. Few refugees follow indigenous beliefs exclusively; however, traditional belief systems are sometimes incorporated into religious practices and are familiar to a majority of Congolese 2.

A typical Congolese household includes not only immediate family, but generally also includes extended family and sometimes those not related by blood. The Congolese interpret family in a much broader sense than Westerners. Children are considered a sign of prosperity and good fortune for the community, so families are often large, with a fertility rate of 5 children born per Congolese woman 1. Care and discipline of children are considered shared responsibilities of the whole community, therefore it is not uncommon for adults who are not biologically related to a child to correct poor behavior and provide input on their upbringing.

In the past, gender roles have typically been well defined, with men protecting and providing for the family and women traditionally taking care of children and tending to household chores. However, as the conflict in DRC expanded in the mid-1990’s, traditional roles began to change as women were forced to become the primary source of financial support for the family. It is no longer uncommon for Congolese women to work outside of the home, usually selling handcrafts or running small businesses. While education is accessible to both genders in urban areas, there continues to be a male bias and women still tend to remain unequal in most sectors of society 2.

Western medicine is generally well-received in Congolese culture, although significant barriers (e.g., geographic location to health centers, high cost) often prevent access to quality healthcare and treatment within the DRC 2. As a result, the Congolese may seek traditional medicines in lieu of, or in combination with, Western therapies. Medical infrastructure is limited mostly to urban areas and care is only delivered after payment in cash, therefore an inability to access or pay for care may lead patients to use herbal medicines or consult with traditional spiritual healers (Feticheur) to resolve illnesses. Christian Congolese are known to rely heavily on prayer 2. Mental illness is often considered a curse (sometimes believed to be caused by supernatural elements or the result of witchcraft) and is not openly discussed. For more information on mental health, refer to the mental health section of this profile.

For more information about the orientation, resettlement and adjustment of Congolese refugees, visit the Cultural Orientation Resource CenterExternal, which is maintained by the organization of the same name.