Anemia is a common condition among Bhutanese refugees, reflecting global rates among people of a similar age and gender. 17 Approximately 20% of children under 15 as well as 20% of refugees aged 65 and older were anemic upon arrival in Texas in June 2009–May 2011 (Figure 8). 15 The prevalence of anemia in women of reproductive age is approximately 19% while pregnant women have an anemia prevalence of 28%. 15 The most common cause of anemia is due to iron deficiency but a number of other conditions affecting Bhutanese refugees could play a contributory role, including malaria, intestinal parasites, deficiencies of vitamin B12 and other micronutrients, tuberculosis, hemoglobinopathies, and chronic disease. According to another survey administered to refugee children aged 6-59 months and their mothers in Nepali refugee camps in 2007, anemia was detected in 13.6% of mothers and 43.3% of children and decreased with age in children. 11 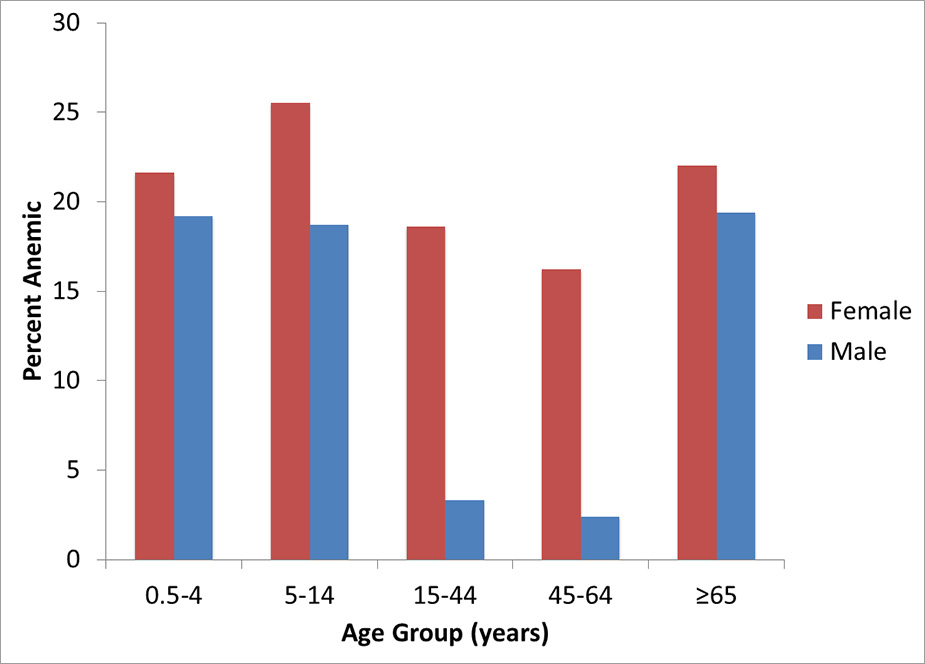 In addition to iron deficiency anemia, other micronutrient deficiencies have been identified among Bhutanese refugees. Vitamin B12 deficiency, a rare condition in the United States, was found in approximately 30-60% of Bhutanese refugees who resettled to the United States during 2008–2011 in an investigation conducted by CDC. 18 This high proportion was likely due to a lack of vitamin B12 in their diet in refugee camps in Nepal. Vitamin B12 deficiency can result in megaloblastic anemia, peripheral neuropathy, and other potentially permanent neurologic signs. All Bhutanese refugees should be given nutritional advice and should receive supplemental vitamin B12 upon arrival in the U.S. Other micronutrient deficiencies, including vitamin B2 (riboflavin), which results in high rates of angular stomatitis in adolescents, have been identified in this population. 19 A survey conducted in 1999 demonstrated vitamin A deficiency in 30% of Bhutanese refugee adolescents. 20

The prevalence of obesity in Bhutanese refugees (defined as BMI >30 kg/m2 in adults > 15 years old or BMI > 95% in children 5–14 years of age), is much lower than that seen in the US population. 16 Obesity was observed in the following proportions of Bhutanese refugees screened in Texas from 2008-2011: