CDC uses cutting-edge technology to detect and respond to clusters of HIV transmission in the United States. This is a critical step that will bring the nation closer to the goal of no new HIV infections.

What is an HIV molecular cluster?

When people receive a diagnosis of HIV, additional tests determine whether they have drug-resistant strains of the virus. Using information from these tests, health departments, together with CDC, can detect molecular clusters, or groups of people with closely related strains of HIV. The collection, analysis, and reporting of this genetic data is often referred to as molecular surveillance. 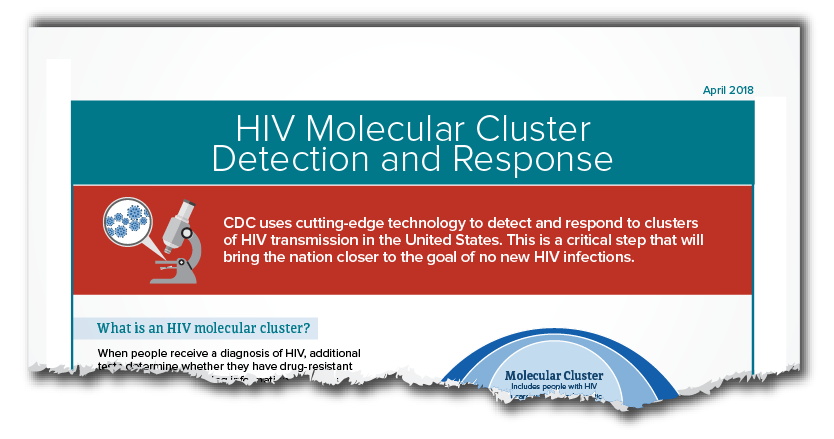 HIV constantly evolves and changes. Immediately after one person transmits HIV to another, the genetic sequence of the virus in both people will be almost identical. Thus, finding two similar strains indicates that individuals may have had recent sex or needle-sharing contacts in common. Over time, each person’s HIV strain will change (evolve) in different ways, and their viruses will become more and more different.

Identifying similar viral strains indicates that HIV transmission probably happened recently and identifying many similar strains within a short period of time could indicate that transmission is occurring rapidly within a cluster. This information helps health departments and researchers quickly learn important information about how HIV is spreading and where to target their efforts, which in turn prevents more people from getting HIV. 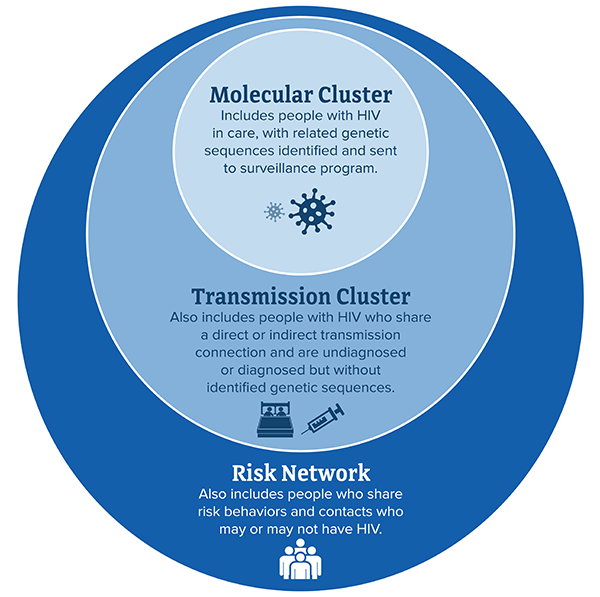 In addition to being identified through molecular cluster analysis, transmission clusters can be identified in other ways:

Molecular cluster analyses provide data that can uniquely complement more traditional methods of finding hotspots of active transmission. Molecular data can be used to confirm that clusters identified using these more traditional methods represent true transmission clusters. So molecular data can help fill in the missing pieces of the puzzle, or can give us a clue about where we can focus our efforts to make the greatest impact.

What is a risk network?

What can we do when a transmission cluster is detected?

When a growing cluster of HIV transmission and its associated risk network are detected, whether through molecular surveillance or more traditional methods, partners can work together to prevent more transmission.

Local and state health departments can: