HIV and Native Hawaiians and Other Pacific Islanders

Although Native Hawaiians and Other Pacific Islanders (NHOPI)a account for a very small percentage of new HIV diagnosesb in the United States (US) and dependent areas,c HIV affects NHOPI in ways that are not always apparent because of their small population size. In 2018, NHOPI made up 0.2% of the US population.d

New HIV Diagnoses Among NHOPI in the US and Dependent Areas by Sex* and Transmission Category, 2018

* Based on sex at birth and includes transgender people. Total for men may not equal 100% due to rounding.
Source: CDC. Diagnoses of HIV infection in the United States and dependent areas, 2018 (updated). HIV Surveillance Report 2020;31.

* Changes in subpopulations with fewer HIV diagnoses can lead to a large percentage increase or decrease.
† Based on sex at birth and includes transgender people.
Source: CDC. Diagnoses of HIV infection in the United States and dependent areas, 2018 (updated). HIV Surveillance Report 2020;31.

It is important for NHOPI to know their HIV status so they can take medicine to treat HIV if they have the virus. Taking HIV medicine every day can make the viral load undetectable. People who get and keep an undetectable viral load (or stay virally suppressed) have effectively no risk of transmitting HIV to HIV-negative sex partners. 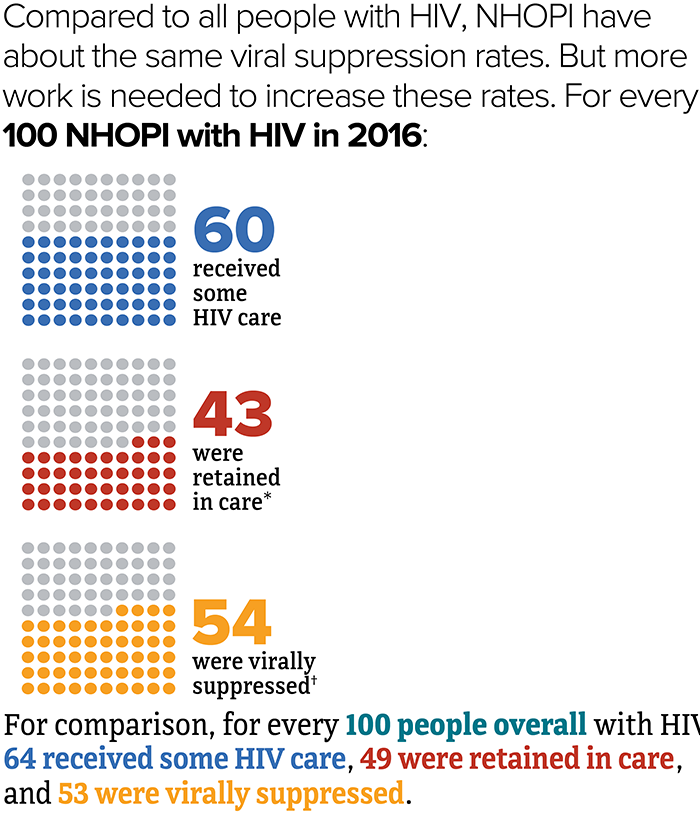 In 2018, there were 15 deaths among NHOPI with diagnosed HIV in the US and dependent areas. These deaths may be due to any cause.

Socioeconomic issues. Poverty, inadequate or no health care coverage, language barriers, and lower educational attainment may make it harder for some NHOPI to get HIV testing and care.

Cultural factors. NHOPI cultural customs, such as not talking about sex across generations, may stigmatize sexuality in general and homosexuality specifically. This could result in lower use of HIV prevention methods like condoms.

Limited research. With limited research about NHOPI health and HIV, creating targeted HIV prevention programs and behavioral interventions for this population can be challenging.

Data limitations. The reported number of HIV cases among NHOPI may not reflect the true HIV diagnoses in this population because of race/ethnicity misidentification. This could lead to an underestimation of HIV infection in this population.

a Adult and adolescent Native Hawaiians and Other Pacific Islanders aged 13 and older.
b HIV diagnoses refers to the number of people who received an HIV diagnosis during a given time period, not when the people got HIV infection.
c Unless otherwise noted, the term United States (US) includes the 50 states, the District of Columbia, and the 6 dependent areas of American  Samoa, Guam, the Northern Mariana Islands, Puerto Rico, the Republic of Palau, and the US Virgin Islands.
d The US Census Bureau’s population estimates include the 50 states, the District of Columbia, and Puerto Rico.