American Indians/Alaska Natives (AI/AN) represent about 1.3%a of the United States population, and about 0.5% of the HIV diagnoses in 2018.  However, the number of HIV diagnoses has increased over time.

New HIV Diagnoses Among AI/AN in the US and Dependent Areas by Transmission Category and Sex, 2018 d 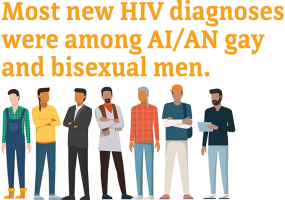 From 2010 to 2017, the annual number of HIV diagnoses increased 39% among AI/AN overall, but trends varied by age and gender: 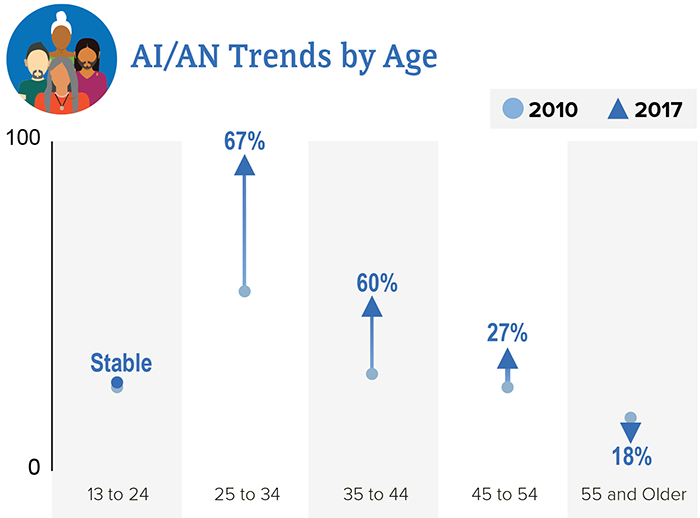 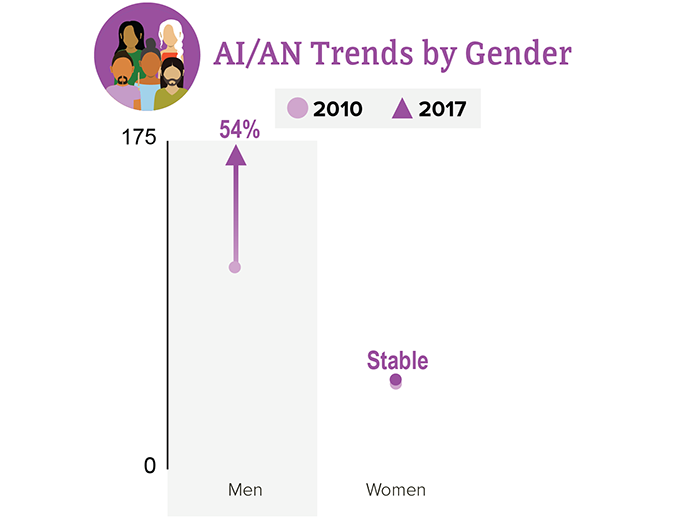 It is important for AI/AN to know their HIV status so they can take medicine to treat HIV if they have the virus. Taking HIV medicine every day can make the viral load undetectable. AI/AN who get and keep an undetectable viral load (or stay virally suppressed) have effectively no risk of transmitting HIV to HIV-negative sex partners. 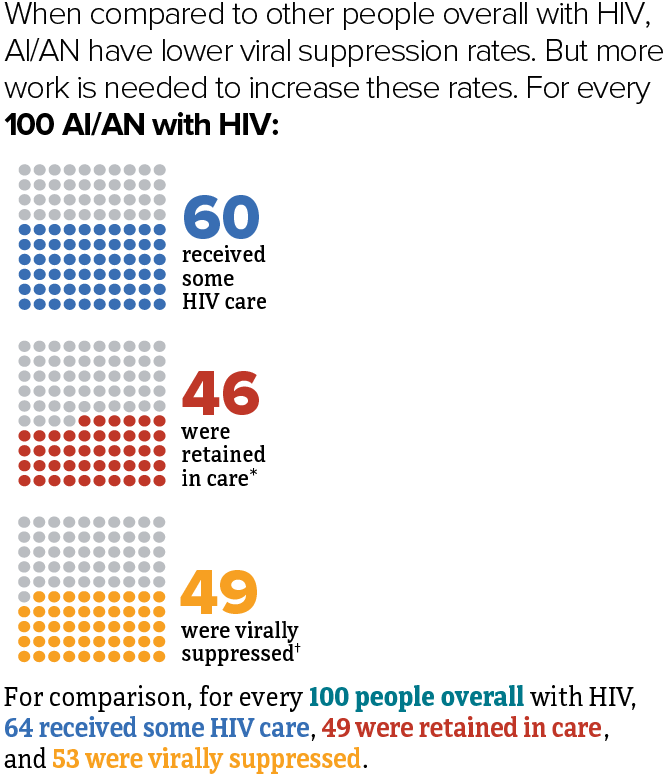 During 2017, 39 AI/AN with diagnosed HIV died in the US and dependent areas. These deaths may be due to any cause.

Sexually transmitted diseases (STDs). From 2014 to 2018, AI/AN had the second highest rates of chlamydia and gonorrhea among all racial/ethnic groups. Having another STD increases a person’s risk for getting or transmitting HIV.

Awareness of HIV status. It is important for everyone to know their HIV status. People who do not know they have HIV cannot take advantage of HIV care and treatment and may unknowingly pass HIV to others.

Socioeconomic issues. Poverty, including limited access to high-quality housing, directly and indirectly, increases the risk for HIV infection and affects the health of people who have and are at risk for HIV infection. Compared with other racial/ethnic groups, AI/AN have higher poverty rates, have completed fewer years of education, are younger, are less likely to be employed, and have lower rates of health insurance coverage.

Data limitations. Racial misidentification of AI/AN may lead to the undercounting of this population in HIV surveillance systems and may contribute to the underfunding of targeted services for AI/AN.

a Percentage of AI/AN reporting only one race. The US Census Bureau’s population estimates include the 50 states, the District of Columbia, and Puerto Rico.
b HIV diagnoses refers to the number of people who received an HIV diagnosis during a given time period, not when the people got HIV infection.
c Unless otherwise noted, the term United States includes the 50 states, the District of Columbia, and the 6 dependent areas of American Samoa, Guam, the Northern Mariana Islands, Puerto Rico, the Republic of Palau, and the US Virgin Islands.
d The terms male-to-male sexual contact and male-to-male sexual contact and injection drug use are used in the CDC surveillance system. They indicate the behaviors that transmit HIV infection, not how individuals self-identify in terms of their sexuality.