In 2018, youth aged 13 to 24a made up 21% of the 37,832 new HIV diagnosesb in the United States (US) and dependent areas.c Youth with HIV are the least likely of any age group to be retained in care and have a suppressed viral load. Addressing HIV in youth requires that young people have access to the information and tools they need to make healthy decisions and reduce their risk for getting HIV, and to get treatment and stay in care if they have HIV.

New HIV Diagnoses Among Youth by Transmission Category and Sex in the US and Dependent Areas, 2018 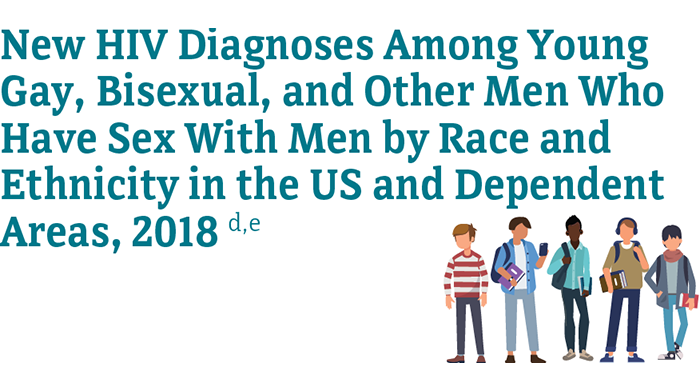 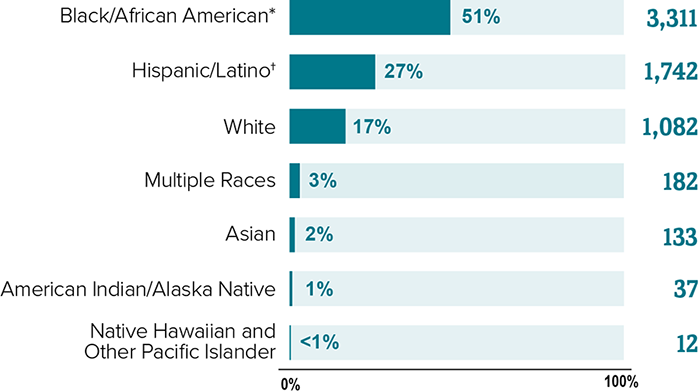 * Black refers to people having origins in any of the black racial groups of Africa. African American is a term often used for Americans of African descent with ancestry in North America.
† Hispanics/Latinos can be of any race.
Source: CDC. Diagnoses of HIV infection in the United States and dependent areas, 2018 (Preliminary) pdf icon[PDF – 10 MB]. HIV Surveillance Report 2019;30.

From 2010 to 2017, HIV diagnoses decreased 10% among youth overall in the 50 states and the District of Columbia. Although trends varied for different groups of youth, HIV diagnoses declined for groups most affected by HIV, including young black/African American gay and bisexual men. 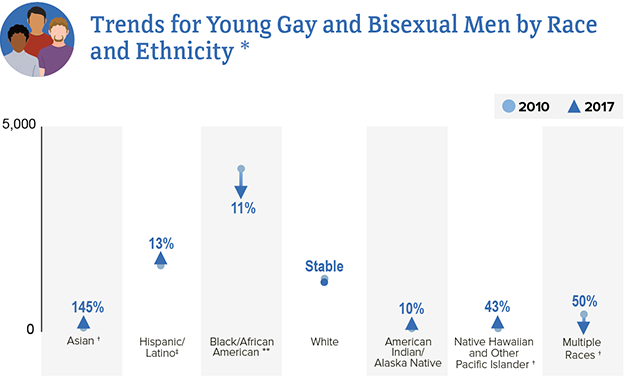 * Includes infections attributed to male-to-male sexual contact and injection drug use (men who reported both risk factors).
† Changes in subpopulations with fewer HIV diagnoses can lead to a large percentage increase or decrease.
‡ Hispanics/Latinos can be of any race.
** Black refers to people having origins in any of the black racial groups of Africa. African American is a term often used for Americans of African descent with ancestry in North America.
Source: CDC. NCHHSTP AtlasPlus. Accessed April 3, 2020.

Youth With HIV in the 50 States and District of Columbia

Youth were the least likely to be aware of their infection compared to any other age group. It is important for youth to know their HIV status so they can take medicine to treat HIV if they have the virus. Taking HIV medicine every day can make the viral load undetectable. Youth who get and keep an undetectable viral load (or stay virally suppressed) have effectively no risk of transmitting HIV to HIV-negative sex partners. 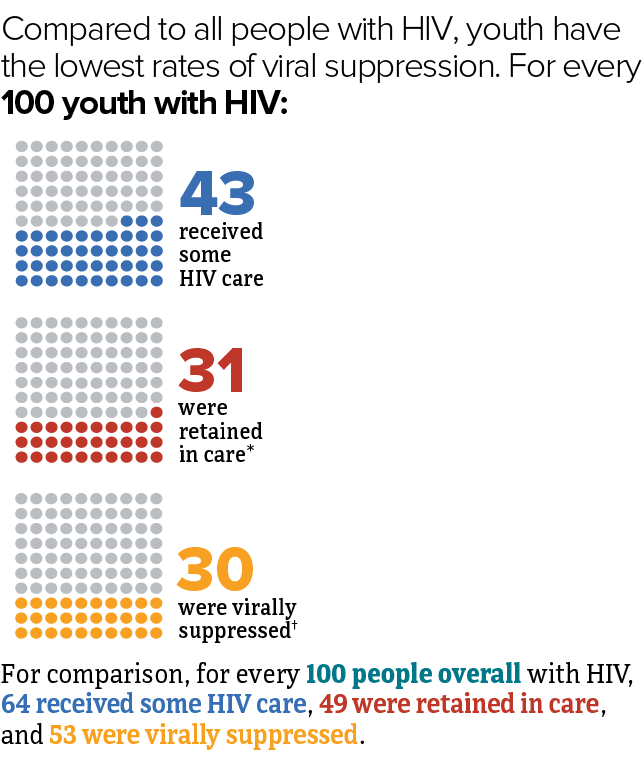 In 2017, there were 149 deaths among youth with diagnosed HIV in the US and dependent areas. These deaths may be due to any cause.

Inadequate Sex Education. The status of sexual health education varies throughout the United States and is insufficient in many areas according to CDC’s 2018 School Health Profilespdf icon. Sex education is not starting early enough: in no state did more than half of middle schools teach all 20 sexual health topics recommended by CDC. Comprehensive sexual health is not reaching most high school students either: in most states, fewer than half of high schools teach all 20 sexual health topics recommended by CDC. Finally, sex education has been declining over time. The percentage of US middle schools in which students are required to receive instruction on HIV prevention decreased from 82% in 2000 to 71% in 2016, according to the School Health Policies and Practices Studypdf icon.

Health-related behaviors. 2017 data from the Youth Risk Behavior Surveillance System (YRBSS), which monitors health behaviors that contribute to the leading causes of death and disability among youth, reveal:

Low rates of testing. Only 9% of high school students have been tested for HIV. Among male students who had sexual contact with other males, only 15% have ever been tested for HIV. Low rates of testing mean more young people have undiagnosed HIV. People who do not know they have HIV cannot take advantage of HIV care and treatment and may unknowingly transmit HIV to others.

Substance use. Nationwide, 19% of all students who are currently sexually active (had sexual intercourse during the previous 3 months) and 20% of male students who had sexual contact with other males drank alcohol or used drugs before their most recent sexual intercourse. Young people may have sex without protection (such as using a condom or taking medicine to prevent HIV), when under the influence of drugs or alcohol.

Low rates of condom use. Nationwide, 46% of all sexually active high school students and 48% of male students who had sexual contact with other males did not use a condom the last time they had sexual intercourse. Using condoms the right way can protect from HIV and some sexually transmitted diseases (STDs).

Number of partners. Nearly one-quarter (24%) of male students who had sexual contact with other males reported sexual intercourse with 4 or more persons during their life, compared to 10% of all students. The more sexual partners you have, the more likely you are to have sex with someone who has HIV and doesn’t know it.

Socioeconomic challenges for young people with HIV. Among people with HIV who are receiving medical care, young people aged 18 to 24 are more likely than older people to be living in households with low income levels, to have been recently homeless, recently incarcerated, or uninsured. All of these factors pose barriers to achieving viral suppression and highlight the need for youth-specific support for HIV care retention and medication adherence.

Low rates of pre-exposure prophylaxis (PrEP) use. A 2018 studyexternal icon found that young people are less likely than adults to use medicine to prevent HIV. Barriers include cost, access, perceived stigma, and privacy concerns.

Feelings of isolation. High school students may engage in risky sexual behaviors and substance misuse because they feel isolated from family or peers and lack support. This is especially true for gay and bisexual students who are more likely than heterosexual youth to experience rejection, bullying, and other forms of violence, which also can lead to mental distress and engagement in risk behaviors that are associated with getting HIV. In the 2017 YRBSS, 33% of gay, lesbian, or bisexual students reported being bullied on school property in the previous 12 months, compared to 19% of all students.

Stigma and misperceptions about HIV. In a 2017 Kaiser Family Foundation surveyexternal icon, 51% of young adults aged 18 to 30 said they would be uncomfortable having a roommate with HIV, and 58% said they would be uncomfortable having their food prepared by someone with HIV. More than half of young people incorrectly believe that HIV can be transmitted by spitting or kissing. Stigma and misperceptions about HIV negatively affect the health and well-being of young people, and may prevent them from testing, disclosing their HIV status, and seeking HIV care.

High rates of STDs. Some of the highest STD rates are among youth aged 20 to 24, especially youth of color. Having another STD can greatly increase the chance of getting or transmitting HIV.

a Unless otherwise noted, persons aged 13 to 24 are referred to as youth or young in this web content.
b HIV diagnoses refers to the number of people who received an HIV diagnosis during a given time period, not when the people got HIV infection.
c Unless otherwise noted, the term United States (US) includes the 50 states, the District of Columbia, and the 6 dependent areas of American Samoa, Guam, the Northern Mariana Islands, Puerto Rico, the Republic of Palau, and the US Virgin Islands.
d The term male-to-male sexual contact is used in CDC surveillance systems. It indicates a behavior that transmits HIV infection, not how individuals self-identify in terms of their sexuality. This web content uses the term gay and bisexual men.
e Includes infections attributed to male-to-male sexual contact and injection drug use (men who reported both risk factors).