HIV Among People Aged 50 and Older 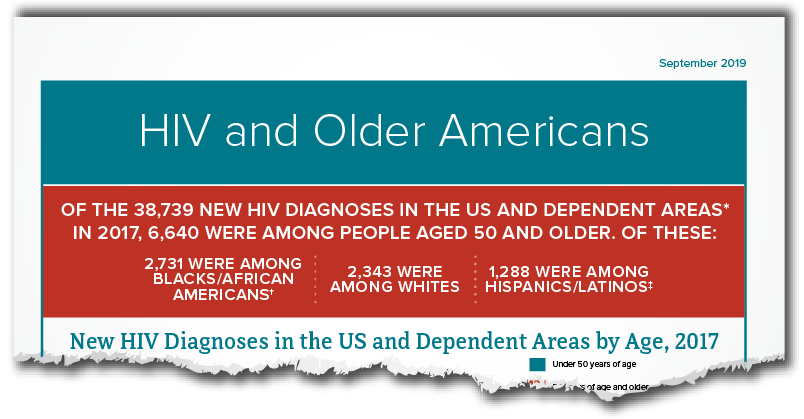 Living With HIV and Deaths 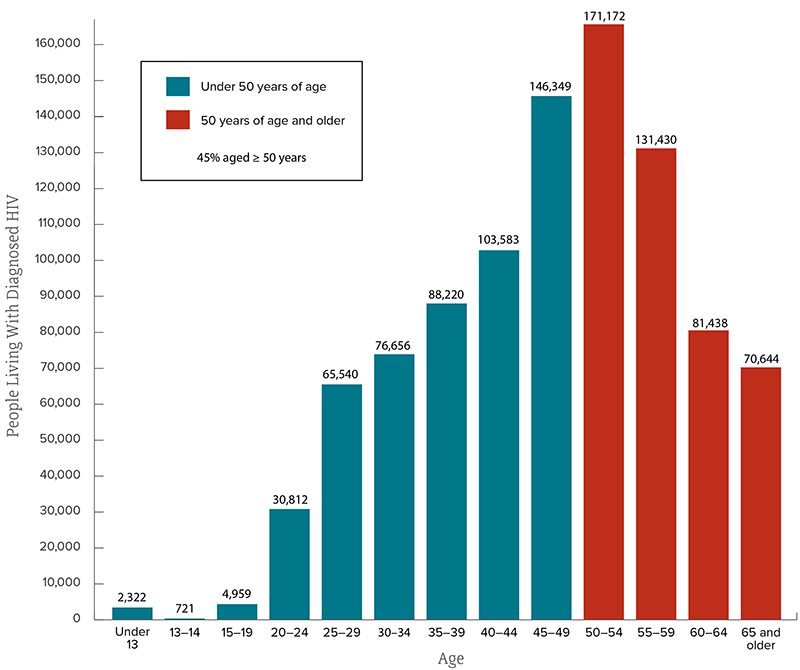 Older people in the United States are more likely than younger people to have late-stage HIV infection at the time of diagnosis, which means they start treatment late and possibly suffer more immune-system damage. Late diagnoses can occur because health care providers may not always test older people for HIV infection. Also, older people may not consider themselves to be at risk of HIV infection or may mistake HIV symptoms for those of normal aging and not consider HIV as a cause. Among people aged 55 and older who received an HIV diagnosis in 2015, 50% had HIV 4.5 years before diagnosis—the longest diagnosis delay for any age group.

Older people may have many of the same HIV risk factors as younger people, including a lack of knowledge about HIV prevention and sexual risk including having multiple sex partners. Older people also face some unique issues:

Stigma is a particular concern among older people because they may already face isolation due to illness or loss of family and friends. Stigma negatively affects people’s quality of life, self-image, and behaviors, and may prevent them from seeking HIV care and disclosing their HIV status.

Aging with HIV infection also presents special challenges for preventing other diseases because both age and HIV increase risk for cardiovascular disease, bone loss, and certain cancers. Older HIV patients and their care providers need to maximize prevention efforts against these conditions and remain vigilant for early signs of illness. They also need to be careful about interactions between the medications used to treat HIV and those used to treat common age-related conditions such as hypertension, diabetes, elevated cholesterol, and obesity.

CDC and its partners are working together to maximize the effectiveness of current HIV prevention methods and improve surveillance among all people in the United States. For example,

For additional information and resources, visit:

a HIV diagnoses indicate when a person was diagnosed with HIV, not when the person was infected.
b Data for 2016 are preliminary (subject to change) because they are based on only a 6-month reporting delay. Data for 2016 should not be used when assessing trends.
c Hispanics/Latinos can be of any race.
d The term male-to-male sexual contact is used in CDC surveillance systems. It indicates a behavior that transmits HIV infection, not how individuals self-identify in terms of their sexuality. This fact sheet uses the term gay and bisexual men.
e People who inject drugs includes infections attributed to injection drug use and other sexual risk factors.
f Viral suppression is defined as having fewer than 200 copies of the virus per milliliter of blood on the most recent viral load test in 2015. Receiving continuous HIV care is defined as having two viral load or CD4 tests 3 or more months apart in 2015. (CD4 cells are the cells in the body’s immune system that are destroyed by HIV.)