New HIV Diagnoses Among People Aged 50 and Older in the US and Dependent Areas by Transmission Category and Sex, 2018* 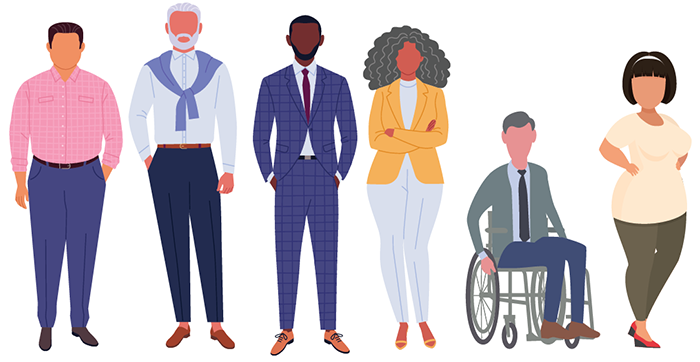 Total for men may not equal 100% due to rounding.
* Based on sex at birth and includes transgender people.
Source: CDC. Diagnoses of HIV infection in the United States and dependent areas, 2018 (updated). HIV Surveillance Report 2020;31.

New HIV Diagnoses Among Adults and Adolescents in the US and Dependent Areas by Age, 2018 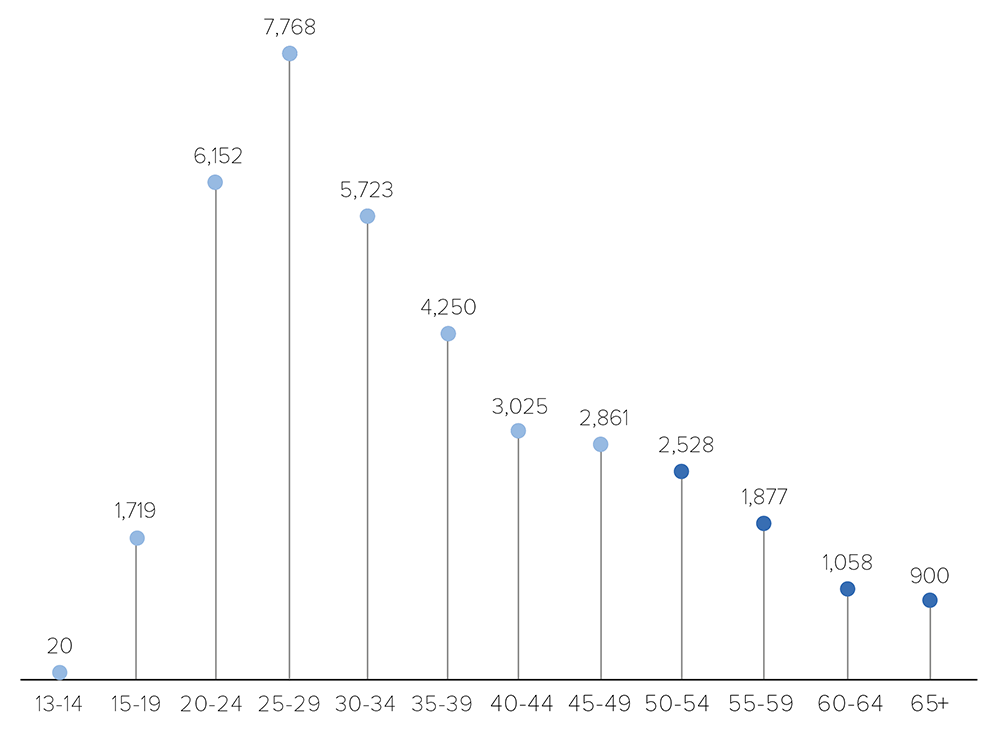 From 2014 to 2018, HIV diagnoses decreased 6% overall among people aged 50 and older, with trends varying by sex and transmission category. 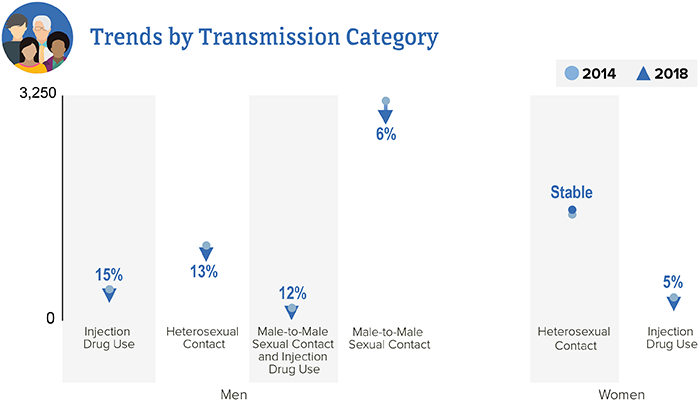 * Based on sex at birth and includes transgender people.
Source: CDC. Diagnoses of HIV infection in the United States and dependent areas, 2018 (updated). HIV Surveillance Report 2020;31.

It is important for people aged 50 and older to know their HIV status so they can take medicine to treat HIV if they have the virus. Taking HIV medicine every day can make the viral load undetectable. People who get and keep an undetectable viral load (or stay virally suppressed) can live a long and healthy life. They also have effectively no risk of transmitting HIV to HIV-negative sex partners. 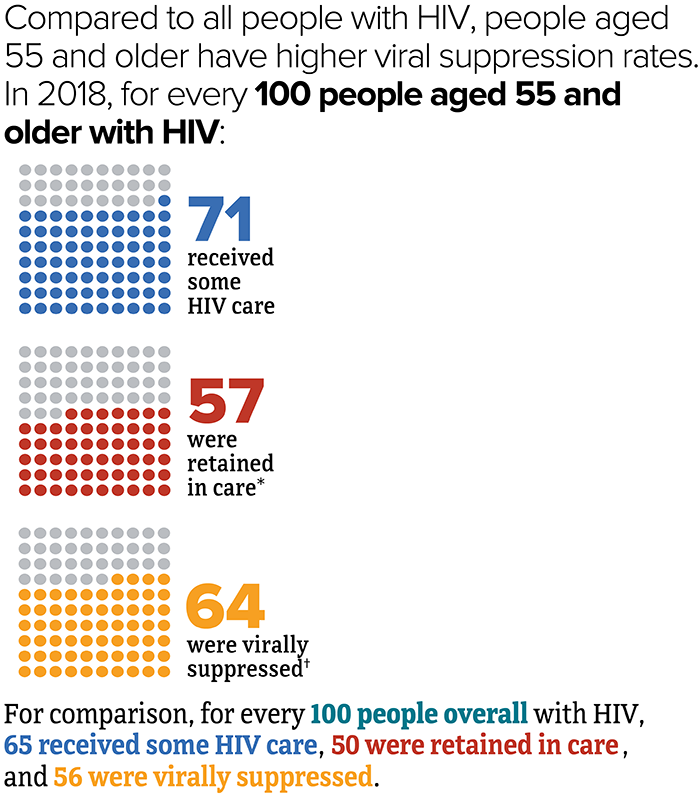 Adults and Adolescents with Diagnosed HIV in the US and Dependent Areas by Age, 2018

In 2018, there were 11,425 deaths among people aged 50 and older with diagnosed HIV in the US and dependent areas. These deaths could be from any cause.

Although they visit their doctors more frequently, older people and their providers are less likely to discuss sexual or drug use behaviors. Health care providers may not ask patients aged 50 and older about these issues or test them for HIV. Also, older people may not consider themselves to be at risk for HIV, may be embarrassed to discuss sex, or may mistake HIV symptoms for those of normal aging.

Older people may have many of the same HIV risk factors as younger people, including a lack of knowledge about HIV prevention and sexual risk, such as having multiple sex partners, and may be less likely to use a condom or other prevention options.

Older people in the United States are more likely than younger people to have late-stage HIV infection at the time of diagnosis. People aged 50 and older may start treatment late, which may put this population at risk of more immune system damage. Among people aged 55 and older who received an HIV diagnosis in 2015, 50% had HIV for 4.5 years before they were diagnosed—the longest diagnosis delay for any age group.

Stigma is common among adults with HIV and negatively affects people’s quality of life, self-image, and behaviors. People aged 50 and older may avoid getting the care they need or disclosing their HIV status because they may already face isolation due to illness or loss of family, friends, or community support.

Aging with HIV presents special challenges for preventing other diseases. Both age and HIV increase the risk for cardiovascular disease, lung disease (specifically chronic obstructive pulmonary disease), bone loss, and certain cancers. People aged 50 and older also need to be careful about interactions between medications used to treat HIV and those used to treat common age-related conditions such as hypertension, diabetes, elevated cholesterol, and obesity.

What CDC is Doing

CDC is pursuing a high-impact prevention approach to maximize the effectiveness of current HIV prevention interventions and strategies. Funding state, territorial, and local health departments and community-based organizations (CBOs) to develop and implement tailored programs is CDC’s largest investment in HIV prevention. This includes longstanding successful programs and new efforts funded through the Ending the HIV Epidemic in the U.S. initiative. In addition to funding health departments and CBOs, CDC is also strengthening the HIV prevention workforce and developing HIV communication resources for consumers and health care providers.

a Unless otherwise noted, the term United States includes the 50 states, the District of Columbia, and the 6 dependent areas of American Samoa, Guam, the Northern Mariana Islands, Puerto Rico, the Republic of Palau, and the US Virgin Islands.
b HIV diagnoses refers to the number of people who received an HIV diagnosis during a given time period, not when the people got HIV infection.