Transgender people may also have unique needs and concerns when interacting with the health care system. Transgender patients’ concerns often arise at the front desk and in waiting areas because those are the first points of contact for most patients. For instance, front desk staff may not know how to handle a situation in which patients’ legal names and genders differ from their preferred names and gender identities and/or expressions. This puts patients in the uncomfortable position of having to explain their transgender status to the front desk within hearing distance of other patients. Other issues, such as providers’ assumptions about sexual orientation and gender conformity, may arise during the clinical encounter. However, these issues are almost always unintentional and can be prevented by training all staff in basic principles and strategies. All members of the health care team, from front desk staff to clinicians, can play a role in creating an environment that respects and responds to the needs of transgender people. Providers can use the material here as a starting point for understanding how to provide affirming services for transgender patients. This information is organized into two parts:

These materials can be:

From the Patient’s Perspective

Watch brief accounts from transgender peopleexternal icon of different ages, ethnicities, and backgrounds discuss their lives and their health care needs. This video provides a look at the diversity of the expressions and experiences of transgender people.

Many—but not all—transgender people make changes to their physical appearance. This is sometimes called gender affirmation. These changes can include modifications to clothing, hairstyles, and mannerisms. Many will change their first name, and they may want others to refer to them by pronouns that correspond to their gender identity. It is estimated that about 60% to 70% of transgender people take hormones and that about 20% to 40% have had one or more gender-affirming surgeries to alter their physical characteristics.1,4 Decisions about medical or surgical treatments depend on personal choice and cost. (See Additional Resources for more on hormone and surgical treatments.)

How many people identify as transgender?

There are two recent estimates of population size ranging from 0.4% to 0.6%. The new estimates are larger than the previous estimate from roughly a decade ago.5,6 The analyses note several reasons that may account for this difference, including a perceived increase in visibility and social acceptance of transgender people, which may increase the number of individuals willing to identify as transgender on a government survey. It is also noted that younger adults aged 18 to 24 are more likely than older adults to say they are transgender.

The research on transgender people and their health needs is sparse. However, available studies indicate that transgender people experience multiple health disparities due to stigma, discrimination, and unique barriers to accessing quality care.7,8 A brief summary of the barriers to achieving positive health outcomes and the consequences of those barriers is presented below. The purpose of listing these is to build an understanding of the difficulties transgender people face so health care providers can help break down barriers.

The majority of transgender people experience various forms of harassment, victimization, and discrimination in their daily lives.9

In addition to facing discrimination, transgender people are more likely than the general population to be homeless, un- or underemployed, and living below the federal poverty level.1,7

Unfortunately, transgender women of color face bias and discrimination on several fronts. For example, an African American transgender woman may face racism, stigma, and sexism in her daily life, with negative or deadly consequences for her health.10

Because of expectations of discrimination or misunderstanding in medical settings, many transgender people avoid or delay seeing a health care provider. But even when they do access care, they have difficulty finding a provider or being referred to providers who have expertise in patient-centered care for transgender people. In one study, 50% of transgender people reported they felt the need to teach their doctors about transgender care.1

Many transgender people lack health insurance, have been denied insurance coverage of transition-related care, or denied coverage of preventive care that is not consistent with the gender their insurer has listed (e.g., coverage for a transgender woman to receive prostate exams may be denied if the patient’s gender is listed as female). Health insurance plans are not required to cover transition-related care, although some states have made this a requirement.

The trauma and stress induced by stigma and discrimination, as well as the related effects of under- and unemployment, homelessness, lack of access to transition-related care and lack of insurance, among other issues, can create a great burden on the mental and physical health of transgender people.

The graphic below illustrates research findings from several sources, including the National Academy of Medicine and U.S. Department of Health and Human Services’ Healthy People 2020, which found that, compared to the general population, transgender people experience higher rates of several health concerns,7, 11-13 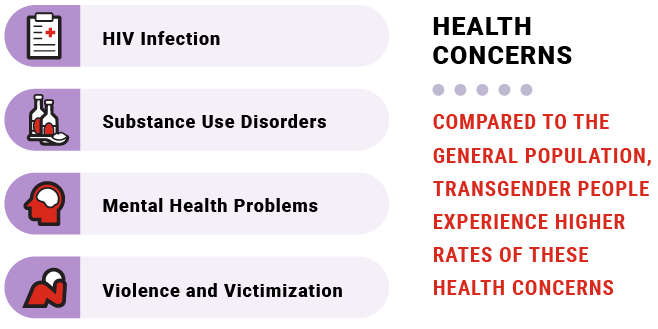 More specifically, studies have found that 41% of transgender people had attempted suicide at some point in their lives1 and that transgender women have one of the highest prevalences of HIV of any group.14 Survival sex work—or engagement in sex work in order to access basic necessities such as food and shelter—increases the risk for some. Transgender women, particularly those of color, have to contend with greater vulnerability to violence.3

Transgender people have been shown to have higher odds of depression and attempted suicide over non-transgender (cisgender) people.12,13 These data suggest the importance for providers to screen and treat those patients experiencing mental health challenges.

In addition, some transgender people may seek unauthorized (sometimes referred to as underground) care through the Internet, friends, and/or other nonmedical individuals in their social circle. They may take nonprescription and potentially dangerous hormones, or get silicone injections or have silicone implants to enhance their appearance. This can lead to a higher risk of illness and injury, further complicating health disparities7. For instance, sharing needles to inject silicone or hormones may place transgender people at risk for HIV and hepatitis C.

Consider having a conversation on the different types of medical care that a person uses, both from a health provider and possibly from a friend or other nonmedical people. Consider discussing possible options for safer ways to get what they are looking for in their health care.

This figure illustrates how stigma and discrimination can impact health and lead to disparities and inequities in health27. 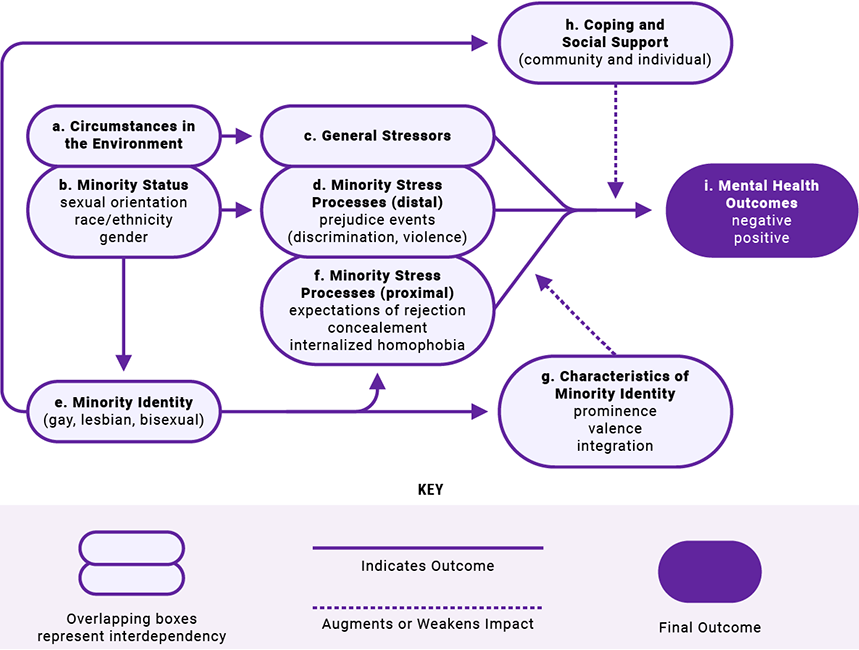 Health care organizations seeking to improve transgender patients’ experiences can implement several strategies to create a welcoming environment. These strategies involve all members of the care team, from front-desk staff to clinicians to administrators, and they are based on the principles of being welcoming, responsive, accountable, reliable, and respectful.

One of the most important steps in creating a welcoming environment for transgender people (and all people) is to address patients using their preferred names and pronouns. For many reasons, this can be challenging in health care environments. Yet using the wrong name or pronoun can cause embarrassment and confusion. Imagine how a transgender woman would feel if a medical assistant called into the waiting room asking for “Mr. Donald Jones” rather than “Denise Jones.” To avoid such situations, here are a few suggested systems and practices that some health care teams have implemented:

What To Do When a Patient’s Records Do Not Match

Health care staff are likely to encounter situations in which a transgender patient’s registration forms, records, insurance, and/or identity documents have different names and genders/sexes listed. It is important for staff members to ask for information without embarrassing or “outing” the patient. Some strategies for handling these situations include the following:

Transgender people use many different terms to describe themselves and their communities. Common definitions and terms are listed below, but this vocabulary is not universal or static. Because the use of these terms changes over time and from one area to another, people may use or understand these words in a different way than what is defined below, or they may use other words to describe themselves and others. If a term that a patient uses is unclear or requires clarification, simply ask the patient what the term means in an open and respectful manner. People may also change the way they describe themselves over time. It is best to give all patients an opportunity to provide information on how they want to be recognized in a health care environment.

*Although often considered derogatory, some transgender people use these terms in a positive way to describe themselves or others.

Transgender is used here as an umbrella term to describe people who have a gender identity that is different from their sex listed on their birth certificate. Gender identity is on a spectrum. It is important to keep in mind that although some transgender people prefer the binary classification of men or women, many reject it. Instead, they may have other identities, such as non-binary, gender expansive, genderqueer, or trans-feminine/trans-masculine. These terms emphasize a broader view of gender and may provide a more nuanced understanding of what it means to be a transgender person.

A note regarding HIV research published in academic journals: An important consideration in research with transgender people is the challenge to accurately classify transgender women for surveillance/research purposes. Not all jurisdictions collect data on gender identity that include transgender people, and some researchers may use older methods that can misclassify transgender women as men who have sex with men. This can also happen as some transgender people may not identify themselves as transgender in health care settings due to fear of discrimination or previous negative experiences. This mix of limitations can result in over- or under-estimating the number of transgender people. As such, it is important to consider methodologies when interpreting data and surveillance findings. As the field is developing newer and more precise ways to identify transgender identity for research and surveillance purposes, it is important to consider methodological approaches, particularly for studies that include both men who have sex with men and transgender women. The most accurate method uses a two-step process, including two questions: “What is your current gender?” AND “What sex were you listed as at birth?” The large majority of studies cited in this document use a two-step process, however one is a meta-analysis and likely includes studies with a one-step process to determine gender identity. For more information about using a two-step process, please refer to the section Collecting Sexual Orientation and Gender Identity.