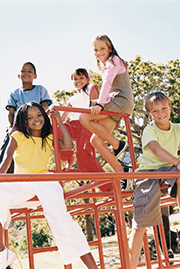 Vision of an Oasis

The Codman Square Neighborhood Development Corporation (CSNDC) in Boston was founded by residents seeking to make their neighborhood safer, more sustainable, and affordable. When CSNDC looked at a series of vacant lots at 100 Ballou Avenue, they saw the potential for a neighborhood oasis.

The area around these lots, located in Boston’s Dorchester neighborhood, is relatively low-income compared to the rest of Boston. The neighborhood is home to groups that are more likely to experience health inequities, including young children and people of color. In order to enhance the neighborhood and improve the quality of life for residents, CSNDC hopes to build a multi-use development on the empty lots.

The project, named “The Oasis on Ballou,” includes three parts: a “tot lot” playground for young children, gardens where neighborhood residents can learn to grow fruits and vegetables to sell in the area, and a kitchen where residents can practice and share their cooking skills using produce from the Oasis gardens.

To ensure that their plan benefits the residents of the surrounding neighborhood, CSNDC partnered in 2012 with Health Resources in Action (HRiA), a public health non-profit with an office down the street from the Ballou lots. Together they conducted a Health Impact Assessment (HIA) on the potential health impacts of the proposed Oasis. The Massachusetts Department of Public Health funded the HIA through the Centers for Disease Control and Prevention’s “HIA to Foster Healthy Community Design” grant.

The HIA results show that the Oasis can improve physical activity, healthy eating, safety, and social cohesion in the neighborhood. While the HIA considers possible exposure to soil toxins , injuries, and crime, it finds the overall health impact of the Oasis to be positive.

The HIA report, found here [PDF – 2.69 MB], also suggests a list of specific recommendations to strengthen positive health impacts and reduce negative ones. These recommendations include planting shade trees around the play area, adding signs to educate users about hand washing and safe food preparation, and notifying local schools, youth groups, and senior centers about opportunities to schedule use of the facilities.

The Oasis on Ballou HIA stands out for its remarkable level of community participation. A group of neighborhood residents, known as “The Friends,” has provided input throughout the HIA process.

“The Friends group was an active advisory committee for the HIA,” says Ben Wood, the Healthy Community Design Coordinator at the Massachusetts Department of Public Health.

“They told us what health issues they wanted addressed and what questions they wanted answered,” adds Allyson Auerbach of HRiA. “They helped us find realistic recommendations in the context of their own neighborhood and added some other suggestions that we hadn’t taken into account.”

“The most important issues are not always the ones that jump immediately to mind,” Wood says. “HIA practitioners can also learn a thing or two from stakeholders—and that happens with every HIA that we do.”

The Friends’ main concerns were increasing physical activity, providing access to healthy food, and improving safety. In particular, the group raised concerns about pedestrian safety around the Oasis and injuries on the playground. The HIA report addressed these issues with recommendations for installing crosswalks and using shock-absorbent floor material.

The Friends also suggested conducting a neighborhood survey. With the help of HRiA and Americorps volunteers, they went door-to-door to speak with residents in the area.

“The Friends came up with the idea, developed the survey with us, and then actually went out and collected the responses,” says Auerbach.

“The survey was accomplished very quickly,” adds Wood, “and that only happens when people are really committed.”

Auerbach believes that the survey was an example of extraordinary community involvement. “Because of help from The Friends, this HIA was able to draw on a rich source of primary data, which is unique for a rapid HIA.”

An Educational Experience for All

The impact of the Oasis on Ballou HIA extends far beyond the project itself. Both Auerbach and Wood see the HIA as an educational experience for everyone involved.

“We didn’t have to convince anyone that health was important,” says Auerbach. “The local residents see and live with the health outcomes in their neighborhood daily. It’s really about helping them understand what causes those outcomes.”

“I think making connections between their environment and their health was valuable to people,” says Wood. “There was palpable excitement that something was finally going to happen in those lots, and being able to raise concerns in the process was empowering for the community.”

Wood believes this project is a good example of using HIA to partner with community development corporations like CSNDC. “A lot of our ongoing work at the Department of Public Health involves community development corporations, and typically they already know that their work impacts public health. They just ask us to make the health impacts more explicit and meaningful to their efforts—and HIA helps do that.”