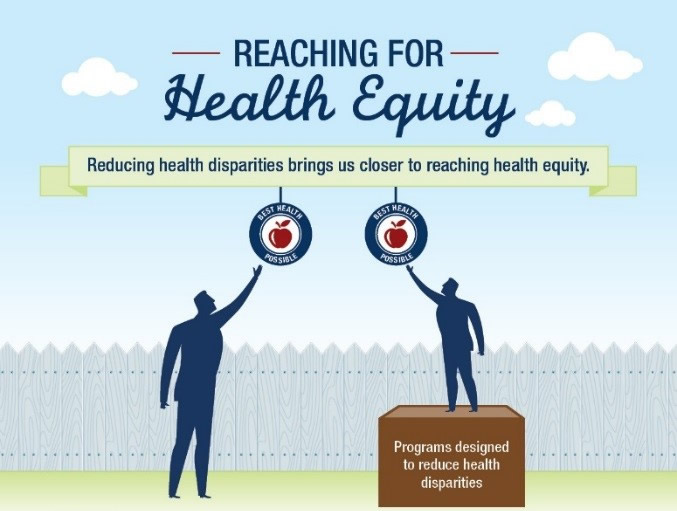 The future health of the nation will be determined to a large extent by how effectively we work with communities to eliminate health disparities among those populations experiencing a disproportionate burden of disease, disability, and death.

Persistent health disparities in our country are unacceptable and correctable. CDC’s Office of Minority Health and Health Equity (OMHHE) advances health equity and women’s health issues across the nation through CDC’s science and programs. OMHHE also increases CDC’s capacity to leverage its diverse workforce and engage stakeholders to this end.

Programs, policy, measurement, and infrastructure are the critical linkages for OMHHE’s operating principles. Learn more about our Paving the Way to Health Equity initiative.

Mission: Advance health equity and women’s health issues across the nation through CDC’s science and programs, and increase CDC’s capacity to leverage its diverse workforce and engage stakeholders toward this end

Vision: A world where all people have the opportunity to attain the best health possible

Compelling evidence that race and ethnicity correlate with persistent, and often increasing, health disparities among US populations demands national attention. Dr. Leandris Liburd, PhD, MPH, MA is the Director of the Office of Minority Health and Health Equity at CDC. In this role, she oversees the work of CDC’s Offices of Minority Health and Health Equity, Women’s Health, and Diversity & Inclusion Management. In addition, she provides agency leadership, direction, and accountability for CDC’s policies and programs to ensure they are effective in improving women’s and minority health. She also serves as the agency’s principal advisor on health equity issues with HHS and other federal agencies, national organizations, academic institutions, and the public.

CDC is an Agency/Operating Division of the US Department of Health & Human Services (HHS).external icon

HHS approved all six of these minority health officespdf iconexternal icon in April 2011.

History of the Office

CDC’s Office of Minority Health was established by the CDC Director on August 8, 1988 as a small coordination office, set up in response to Secretary Heckler’s 1985 landmark reportexternal icon on minority health.

Ten years later, the office went through the first of many strategic redirections, and continued to transform over the next 7 years to become CDC’s Office of Minority Health & Health Disparities (OMHD) in September of 2005, with established programs now serving a broader focus of expanded populations.

OMHD was later strategically aligned within the Office of Strategy and Innovation (OSI) to establish the CDC Goals and ensure health disparities were being addressed and incorporated into all CDC work and agency goals.

In 2008, OMHD was moved to the Office of the Chief of Public Health Practice (OCPHP), to be best positioned to accelerate health impact for groups at higher risk in the US, with a focus to develop CDC-wide health disparity elimination strategies, policies, and programs.

In 2010, the CDC restructure initially partnered OMHD with the Office of the Associate Director for Program (OADPG), with whom it shares a close collaborative relationship today, working to ensure all CDC Programs address health disparities at all levels, through planning, performance, accountability, and program evaluation.

At the beginning of 2011, the office transforms once again, to emerge as the new OMHHE, placed in the CDC Office of the Director (OD), and led by Dr. Leandris Liburd.

In 2018 OMHHE celebrated 30 years of service with the commemoration theme, Mission: Possible. View this timeline to learn more about achievements in minority health and OMHHE’s anniversary.