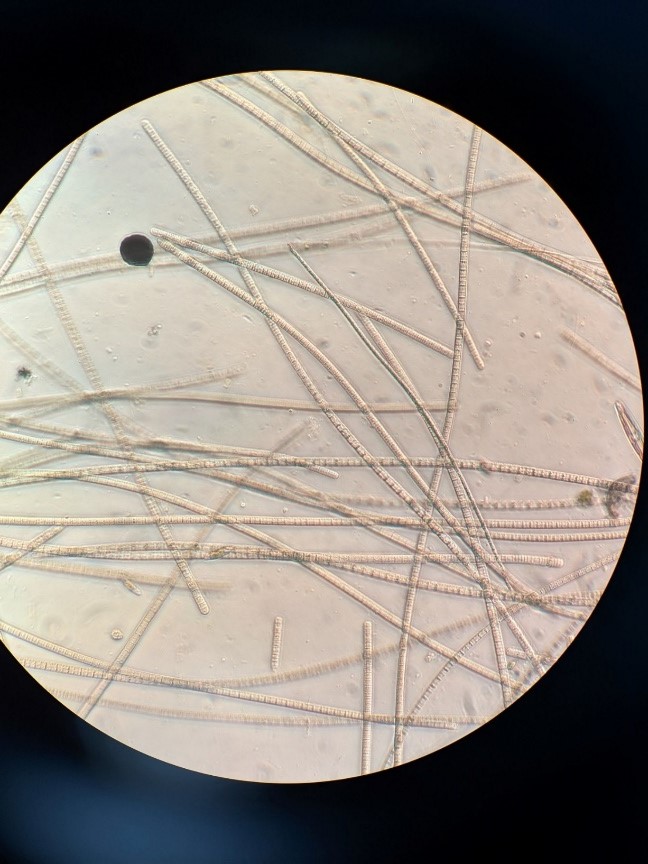 Oscillatoria sp. of cyanobacteria identified from the Michigan pond associated with dog deaths.

In July 2019, the Michigan Department of Environment, Great Lakes, and Energy (EGLE) received a citizen report that five dogs had become ill. Three of the dogs showed signs consistent with poisoning, including vomiting, neurologic signs, and rapid deterioration. Four of the dogs died, including two that had sudden, unobserved deaths. All affected dogs swam in or drank water from the citizen’s private pond, located in Michigan’s northern Lower Peninsula, shortly before becoming ill.

The Michigan Department of Health and Human Services (MDHHS) joined a multi-agency response to investigate the cause of the dog illnesses and deaths. Based on the dogs’ symptoms and exposure, investigators suspected cyanotoxins (poisons made by some cyanobacteria) as a potential cause. However, neither the citizen nor local health department investigators observed a cyanobacterial bloom, and pond water samples initially tested at MDHHS Bureau of Laboratories were negative for three common cyanotoxins—microcystins, anatoxin-a, and cylindrospermopsin.

The cause of the dogs’ deaths remained a mystery. No onsite chemicals or pesticides were reported, and an MDHHS investigation did not find any nearby industry or environmental contaminants. However, investigators noted that Chara—a type of green algae that does not produce toxins—was growing on the bottom of the pond, and the owner frequently removed it.

In addition to MDHHS and EGLE, the Michigan Department of Agriculture and Rural Development, Michigan State University’s Veterinary Diagnostic Laboratory, and the local health department had key roles in the investigation, showcasing Michigan’s One Health approach to harmful algal blooms.