From Epidemic to Elimination—Ending Epidemic Meningitis in Sub-Saharan Africa 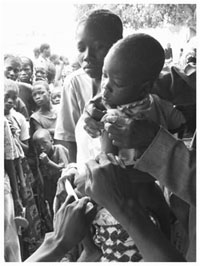 “It takes a village to protect a village.”

For Dr. Thomas A. Clark, epidemiology lead for CDC’s Meningitis and Vaccine Preventable Diseases Branch, these are words to live by, especially in Sub-Saharan Africa, which suffers from what he calls “the one-hundred-year-old problem” of meningitis. The region has long been hit by what he calls “explosive epidemics” of the disease, which can lead to death or cause life-long disabilities such as deafness. In 1996 alone, 200,000 meningitis cases were reported in Africa.

“1996 was really an effective call to the world to come up with a more effective solution to meningitis,” says Dr. Clark, who explains that the reactive vaccination strategy being used at the time to address the most common cause of meningococcal meningitis, serogroup A, was leading to delays in vaccination, and more lives lost. The global health community heeded the call. With a grant from the Bill and Melinda Gates Foundation, PATH and WHO partnered in 2001 on the Meningitis Vaccine Project (MVP), creating a manufacturer consortium that helped develop a new meningitis vaccine, MenAfriVac™, and negotiated a price of 40 cents per dose for mass vaccinations in the countries in Sub-Saharan Africa that were most affected by meningitis.

CDC staff provided critical testing of the vaccine prior to its licensure. What they found was astounding: in 12- to 23-month-old African children, the vaccine was more than 20 times more effective than previous vaccines that had been used. Once MenAfriVac™ was licensed, UNICEF assisted with the shipping and storing of the vaccine, and in 2010/2011, a mass vaccination program was rolled out in Mali, Burkina Faso, and Niger. More Sub-Saharan countries will receive the vaccine in the next few years.

The program is already successful. In just ten days, over 11 million citizens were vaccinated in all 63 districts across Burkina Faso. Since the start of the initiative, over 20 million people have received the vaccine, and only three cases of serogroup A meningococcal meningitis have been found. Over a decade, mass MenAfriVac™ vaccinations have the potential to save 123,000 lives, save 287,000 people from suffering permanent disabilities due to meningitis, and save Sub-Saharan countries one million dollars in associated costs.