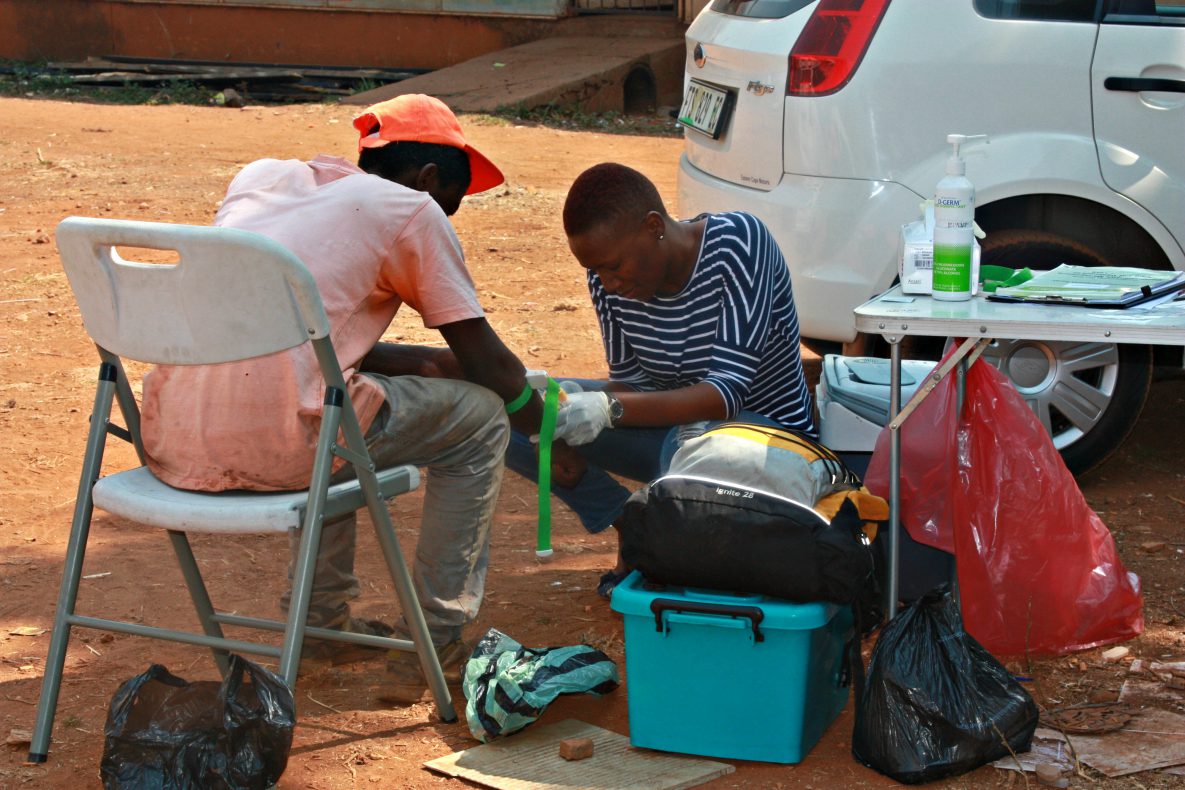 For two years, *Godfrey Kgope shared and reused dirty needles to inject drugs. He had no idea that he was putting himself at a risk of contracting HIV and other infections like hepatitis C. For him it was about getting a fix and escaping the harsh reality of living on the streets of Pretoria.

Early last year, Kgope (32), originally from KwaMhlanga in Mpumalanga, crossed paths with the StepUP team during an outreach program in the Pretoria city center. Although hesitant at first to listen to the peer educators who were educating people who inject drugs (PWID) about the dangers of sharing needles, he eventually lent them an ear, a decision he now says saved his life. 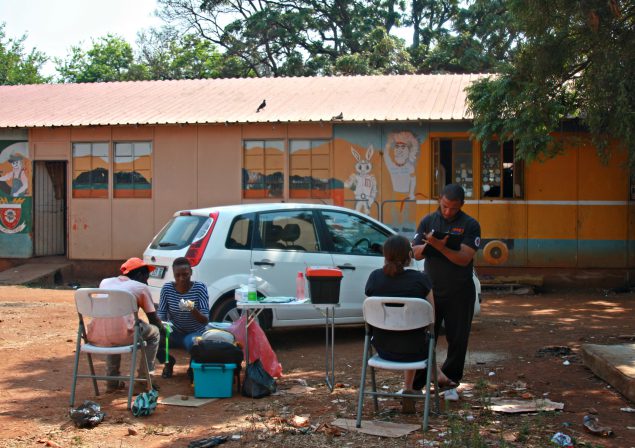 Taking services where the people are

“I didn’t know I could get HIV by sharing needles with my friends. I thought that if I washed it with water or wiped it with a cloth I couldn’t be infected. But now I know better because of the StepUP project, which empowered me with information, and continues to supply people like me with clean needles,” Kgope said.

StepUP is a project of TB/HIV Care Association and OUT LGBT Well-Being, organizations that provides a package of evidence-based HIV prevention and harm reduction services to PWID in Cape Town, Durban and Pretoria. The project is funded by the Centers for Diseases Control and Prevention through PEPFAR.

Through outreach visits four days a week, the StepUP team offers HIV counseling and testing, distributes condoms and lubes, educates PWID on minimizing risky behaviors and overdose prevention and management, and offers sterile injecting equipment as part of the needle exchange program. The needle exchange program is not funded by CDC, but by the through Mainline, a Dutch initiative.

Like all the PWID whom the StepUP team meets, Kgope was offered HIV counselling and testing. Worried that he might be living with HIV, he tested and fortunately for him, he was HIV-negative. But, one of his acquaintances, whom he referred to as Thato, was not so lucky. 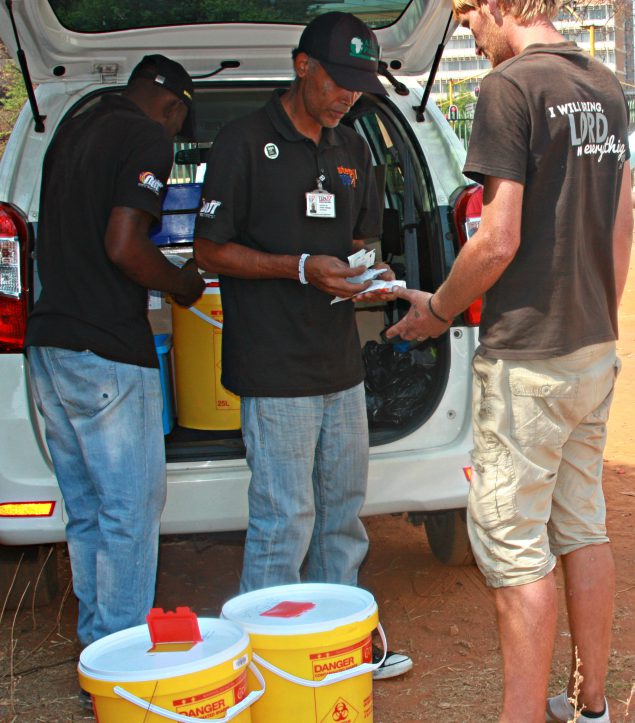 Thato tested positive for HIV, his blood was drawn at the same time for CD4 testing and was he was initiated on Antiretroviral Therapy a few days later. Today, he is one of the 20 homeless PWID who are receiving ART through the OUT LGBT Well-Being’s TEN81 Clinic in Hatfield, Pretoria. Ten people on ART are virally suppressed, something that Angela McBride, PWID Project Coordinator, described as a success.

Ten may seem like a small number, said McBride, “But, to us it is big. To have over 20 homeless PWID on ART and to achieve viral suppression with more than half of them is a success because these are people whom one would expect to struggle with adhering to treatment due to the conditions in which they live.”

South Africa has the largest HIV epidemic in the world, with an estimated 7 million people living with HIV in 2015. Studies have shown that drug use plays a significant role in the growth of the epidemic in this country, yet there are no interventions aimed at reducing the risk of HIV infection in PWID.

A UNODC-funded Rapid Assessment and Response (RAR) study, which looked at the HIV prevalence and risk among people who inject drugs in five South African cities found that the HIV prevalence among PWID was 14% in 2013. The study also showed that PWID were at a higher risk of HIV infection and transmission due to needle sharing, high risk sexual practices and behavior, especially women who inject, and a lack of PWID specific services.

The study recommended a number of interventions to reduce these risks, including increased access to sterile injecting equipment, education on safer injecting practices, and access to sexual and reproductive health services. OUT LGBT Well-Being and TB/HIV Care Association responded to the recommendations by establishing the StepUP project in June 2015, a much needed intervention in a country that neglected key populations including PWID.

Dawie Nel, Director of Pretoria-based OUT LGBT Well-Being said when the project was rolled out, “There was a huge need for harm reduction services. There was a great deal of needle and syringe sharing between PWID and high-risk sexual practices. There was also very little knowledge around HIV, hepatitis and other blood borne infections.” 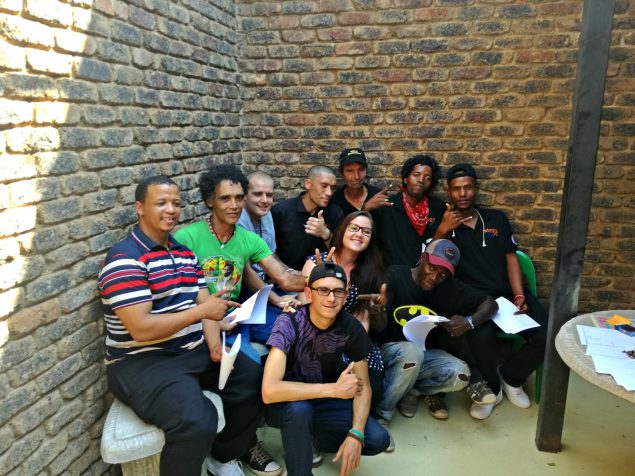 A strong desire to see behavior change in PWID keeps the team going.

While the picture has not entirely changed over the past two years, the StepUP project has brought relative behavior change among PWID living in Pretoria Region 3 – Pretoria central, Moot, Bougainville, Mountainview, Wonderboom, Brooklyn, and Hatfield. More are participating in the needle exchange program and many more are regularly tested for HIV. In 2016, 618 PWID were tested for HIV and 104 were found to be positive, a yield of 22.3%. Between January and August of 2017, 393 PWID were tested for HIV and 89 were positive, resulting in a yield of 33.4%.

Reaching so many PWID was not an easy feat, as Nelson Medeiros, StepUP Project Manager explained.

“It meant that we become resourceful in how we deliver health services to PWID effectively, and had learned to earn their trust. PWID often feel marginalized by society and usually choose to cluster and live in uninhabitable areas. Sometimes we had to go under the bridges, fields, abandoned buildings, and in other areas where it was difficult to even reach by a car just to find them. Despite these challenges, we were encouraged by the behavior change in PWID because we knew that these interventions we meant to save their lives,” Medeiros added.

*Godfrey Kgope gave CDC SA permission to use his name