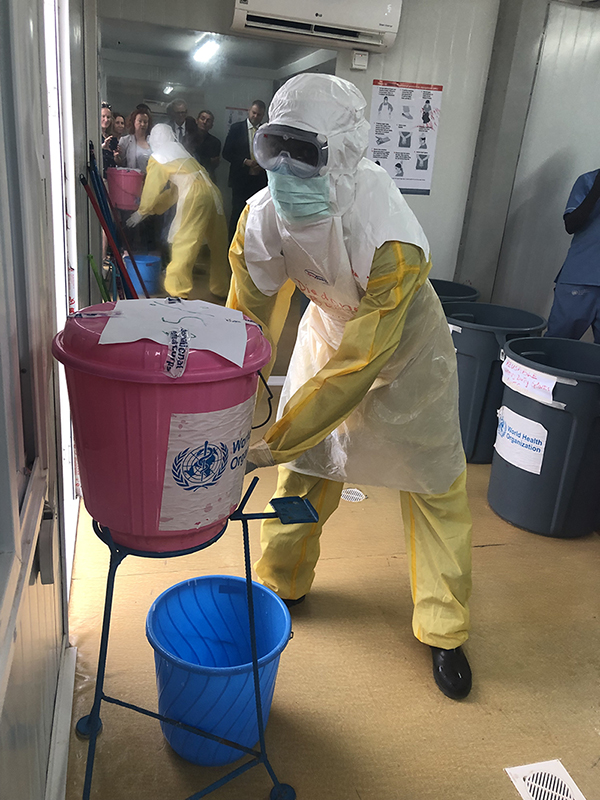 A member of the International Medical Corps washing their hands after handling a “suspect” Ebola patient in an Ebola isolation facility during the simulation exercise. Photo by Aimee Summers

The countries where CDC employees and locally employed (LE) staff work typically present their own unique challenges and opportunities. In countries like South Sudan, where the CDC footprint is small because of high security risks, there are a limited number of US government employees who support the mission. So, when the country was declared a first-tier priority for Ebola in August 2018, because it borders the Democratic Republic of the Congo, a critical need emerged. Even though the main goal of this office is to work on the US President’s Emergency Plan for AIDS Relief (PEPFAR) activities, an Ebola plan needed to be put in place—quickly. CDC Country Director Sudhir Bunga, the four local staff, and headquarters staff were already poised for action

A national Ebola virus disease (EVD) task force (NTF) was established along with state-level EVD task forces in seven high-risk states. The South Sudan Ministry of Health (MOH) with the assistance of CDC, other UN partners, and several NGOs, developed an EVD preparedness and response plan that included what needed to happen within the first 72 hours of a confirmed case if Ebola. A full-scale EVD simulation exercise (SIMEX) to test the system was included in the plan.

Aimee Summers, an epidemiologist based at CDC headquarters in Atlanta, Georgia, served as the Ebola coordinator for this exercise and clarified the challenges and the opportunities.  “In addition to the threat of Ebola, South Sudan faces considerable humanitarian challenges and insecurity, which makes even providing basic services challenging. There is a constant struggle of balancing and harmonizing the needs of the Ebola activities with the overall needs of the humanitarian response. The SIMEX helped us to identify some of the gaps that may exist during an introduction of an Ebola case and helped us focus on activities to address those gaps,” she said. 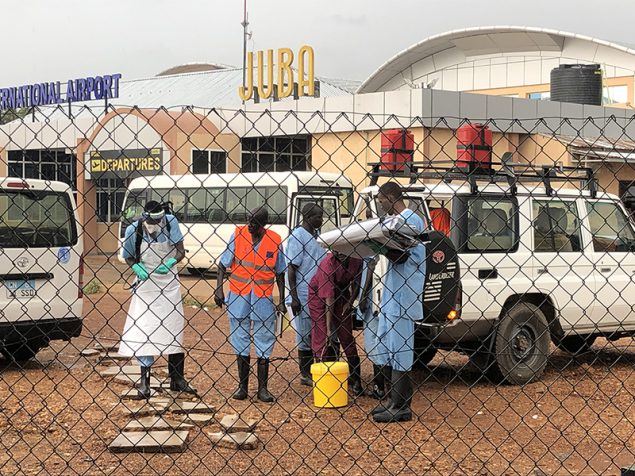 Members of the national rapid response team preparing to investigate a “suspect” Ebola patient at Juba International Airport during the simulation exercise. Photo by Aimee Summers

The SIMEX, which took place in August, 2019, focused on testing and evaluating the country’s current EVD preparedness and response plan in the most realistic manner possible. Three scenarios were simultaneously tested:

Interspersed within the exercise were impromptu media interviews, rumors, and other realistic challenges for the NTF and MOH to navigate. By the end of the exercise several critical gaps became apparent. There was a need for better coordination and communication between the national and sub-national levels, more clarity regarding roles and responsibilities within the response structures, and more effective communication with and care of patient after identifying Ebola-like symptoms, among others.

The SIMEX was most importantly a learning opportunity, according to Kendra Broadwater, the infection prevention and control (IPC) focal person for the exercise. “The full-scale simulation exercise showed the MOH and all of the implementing partners working on Ebola preparedness how far they’d come, and which programs worked well, but also magnified how missteps large and very small—like a mishandled patient or poorly worn personal protective equipment—could allow Ebola to gain a foothold in South Sudan. We as CDC worked closely with the ministry and implementing partner counterparts, knowing that an outbreak would be difficult to contain unless the country and partners work in tandem to fully prepare, especially in frontline healthcare facilities,” she said. 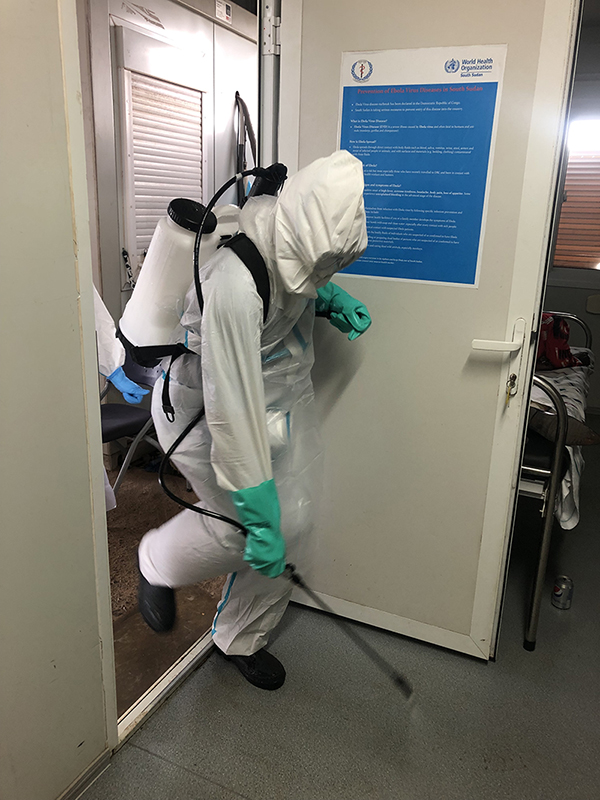 A member of the International Medical Corps disinfecting the area in an Ebola isolation facility where a “suspect” Ebola patient had entered. Photo by Aimee Summers

Six CDC staff participated in the SIMEX as facilitators, evaluators, and actors. CDC staff in South Sudan currently support the MOH as well as other partners and donors in the areas of epidemiology/surveillance, infection prevention and control, emergency operations management, border health, vaccination, training coordination, and overall coordination. While working on Ebola preparedness in South Sudan presents many unique challenges because of the ongoing humanitarian crisis and lack of health infrastructure, other competing priorities remain. There is insecurity, displacement, food shortages, and outbreaks of other diseases, such as measles and cholera.

In response to the gaps highlighted by the SIMEX, CDC staff are working with the MOH and other partners to identify these and other priorities, actions to address these priorities, and establishing timelines for addressing these priorities. The SIMEX will also strengthen overall preparedness in South Sudan to respond to public health emergencies. This will help to improve the ability to stop the spread of disease throughout the region and across the globe.