Seasonal Influenza: Austin's Story, the Call to Get Vaccinated, and Global Progress Toward Prevention

On a winter morning two years ago, a previously healthy, athletic 17-year-old boy named Austin BoothExternal awoke feeling ill, but took some medicine and pushed through his day the best he could. The next morning he was coughing up blood; his mother called the doctor, who sent him immediately to the emergency room. Within hours, Austin was placed on a machine to help him breathe, and was later airlifted to another hospital. Despite medical attention, what started out as influenza (flu) led to pneumonia; resistant bacteria called ‘MRSA’ were also detected. A mere five days following Austin’s first sign of illness on that fateful morning in January 2011, surrounded by family and friends at the hospital, Austin died. 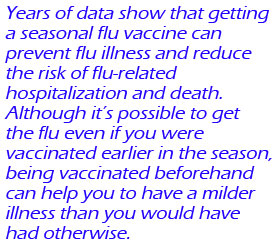 Although most people who get influenza recover without needing medical attention, Austin’s story is a stark reminder that influenza is a potentially serious disease that can lead to devastating outcomes, even in healthy people.

Austin, like others, had not been vaccinated with a flu vaccine. And now his parents are left to wonder if getting him vaccinated against influenza might have prevented the initial flu illness that opened the door to the other infections that took his life. No parents should ever face that question.

Getting a flu vaccine every year is the first and most important step in preventing influenza. This week CDC is partnering with organizations around the United States as part of a national observance and reminding everyone 6 months and older that it’s not too late to get vaccinated against flu! Special events are taking place through December 14, 2013, and there are many ways for people and organizations to get involved and make a difference in the fight against flu. Go to National Influenza Vaccination Week: Activities and Materials to find out more.

As Austin’s story illustrates, influenza can sometimes lead to complications, hospitalization, and even death. Influenza also can worsen underlying conditions including asthma, chronic lung disease and diabetes, and can be dangerous for pregnant women.

Apart from pregnant women, other groups are also at high risk of developing serious flu complications. Those groups include (but aren’t limited to) children younger than 5 years old, people 65 years of age and older, and people with certain long-term medical conditions such as asthma, diabetes, heart disease, neurological and neurodevelopmental conditions, blood disorders, morbid obesity, kidney and liver disorders, HIV or AIDS, and cancer. 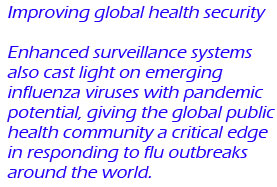 On a global scale, it’s estimated that seasonal influenza may result in 3-5 million cases of severe illness and between 250,000 and 500,000 deaths3. These estimates are based on data from the United States and other industrialized countries; while relative to industrialized regions of the world, less is known about the impact of influenza in developing countries, available data indicate the risk of severe illness is likely higher in low-income countries compared with developed countries.

CDC has assisted many low- and middle-income countries with developing and enhancing their own influenza surveillance systems. Data from these systems help countries to assess the burden of influenza in their populations and determine if implementing a seasonal flu vaccination program might have a positive impact.

In 2013, CDC awarded cooperative agreements to support advancing vaccine policy and introduction to China, Kenya, Morocco, Uganda and Vietnam. CDC is also helping resource-poor countries impacted by influenza to find cost-effective solutions to bring flu vaccine to their populations. For example, with the help of private donors and expertise from CDC, World Health Organization and others, this year Laos – a small resource-poor country in Southeast Asia – held its second annual national influenza vaccination campaign, and Nicaragua expanded its existing flu vaccination program to pregnant women for the first time.