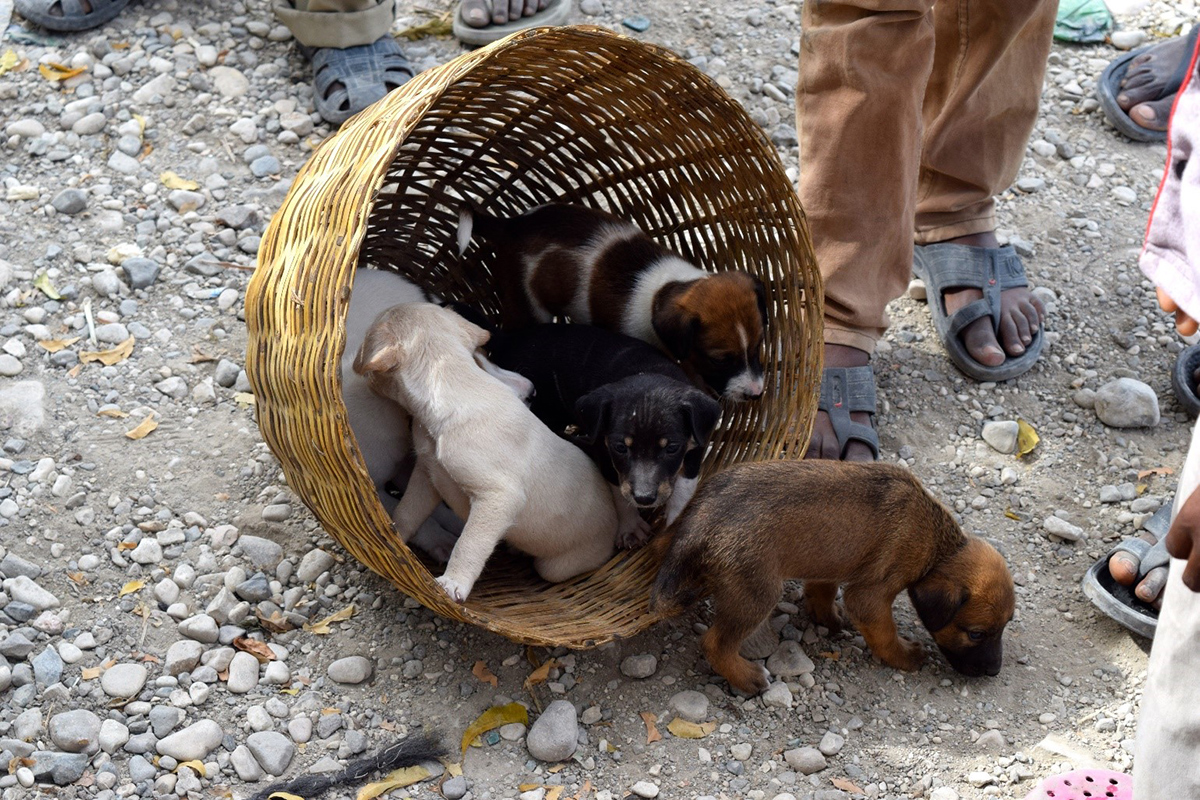 September 28 is World Rabies Day, a global health observance started in 2007 to raise awareness about the burden of rabies and bring together partners to enhance prevention and control efforts worldwide. While rabies is a 100% preventable disease, an estimated 59,000 people die from the disease around the world each year. Most affected are countries in Africa and Asia, and almost half of the victims are children under the age of 15.

Animal health worker in Haiti preparing to administer a rabies vaccine to a dog.

Rabies experts from CDC’s Poxvirus and Rabies Branch (PRB) work in many countries where rabies is still endemic to help set up programs to control, track, and prevent this disease in people and animals. The main areas of assistance include: 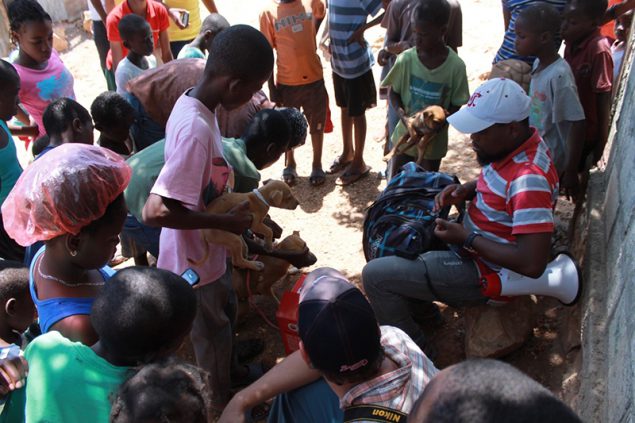 Children bring their dogs to vaccination post in Haiti. 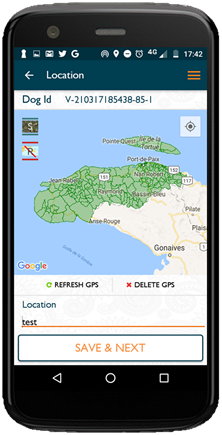 Haiti is one of five remaining countries in the Americas where canine rabies continues to cause human deaths. It has the highest rate of human rabies deaths in the Western Hemisphere, with an estimated 2 each week. Yet only about 7 of these human rabies deaths are reported to health authorities each year due to inconsistencies in case detection, limitations in diagnostic capacity, and lack of awareness and education about the disease among Haitians and medical providers.

In 2013, the Government of Haiti along with CDC and other partners began an animal rabies surveillance program in several regions in Haiti, and saw an 18-fold rise in detection of rabid animals. In 2015, CDC evaluated Haiti’s canine rabies vaccination program and found that only 45 percent of dogs were vaccinated as a result of the campaign, far short of the 70 percent needed to stop rabies spreading in the dog population. In addition, the researchers found that Haiti has nearly twice as many dogs as previously thought.

Since then, CDC and its partners have assisted in the development of local capacity for animal rabies vaccination and surveillance and have trained animal health workers in managing mass dog vaccination campaigns. So far this year, they have vaccinated 110,000 dogs through September 2017.

An essential part of this success was the use of a new mobile phone app designed by the nonprofit Mission Rabies that helps track canine rabies vaccination campaigns in near-real time. The app has been helpful in monitoring campaign success and directing where the vaccination teams should go to reach dogs that need vaccination. The ultimate goal is a 70 percent nationwide dog vaccination rate. If sustained for 5 years, this level is anticipated to disrupt rabies transmission. 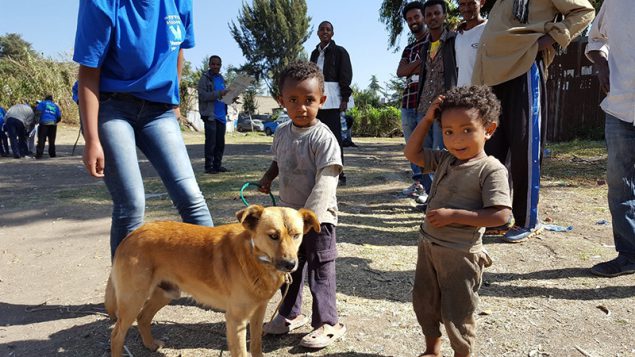 Boy with his dogs at a mass vaccination event in Addis Ababa, December 2016.

In Ethiopia, an estimated 2,700 people die from rabies each year—one of the highest rabies death rates in the world—but the true number of deaths caused by rabies is unknown because the disease is underreported and rabies diagnostic laboratories are not established. Furthermore, few places in Ethiopia offer life-saving human rabies post-exposure prophylaxis (PEP) and most people don’t have the means to make it to a major hospital to get treated. In addition, people’s awareness about what to do if bitten by dogs is low, and people often do not seek medical help when bitten.

The human risk for rabies is directly linked to the high rate in dogs, which is why it is important to hit the disease at its core—vaccinating dogs. However, like many other countries with high human rabies death rates, the rabies vaccination coverage among dogs is very low in Ethiopia, far below the 70 percent needed to halt the transmission of canine rabies. This is partly due to lack of awareness about rabies vaccination among dog owners and the high number of stray dogs in the country. The total number of animal rabies cases in Ethiopia is unknown, but with a rural and farming population of more than 80 percent, annual livestock losses caused by rabies place a large societal and economic burden on the country. 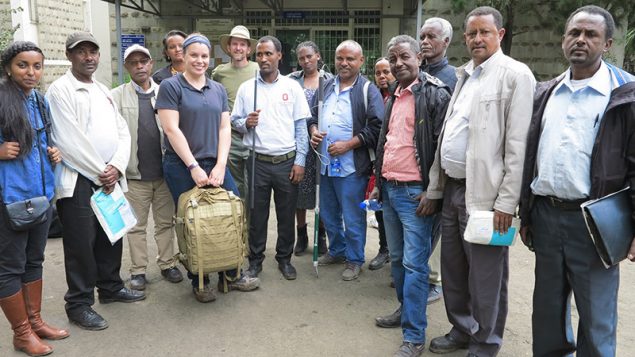 CDC’s Emily Pieracci and Meseret Birhane with a group of Ethiopia’s animal surveillance officers in front of CDC Ethiopia office in Addis Ababa after a day of training.

In 2017, the training included organizing mass dog vaccination campaigns, building rabies laboratory diagnostic capacity and expertise, manufacturing a safe vaccine, and creating rabies awareness materials for the general public. Over 7,000 dogs have been vaccinated in Addis Ababa in 2017 as part of the mass vaccination trainings. The work continues to establish three state-of-the-art rabies diagnostic laboratories across the country and assist with mass vaccination campaigns outside of Addis Ababa.

World Rabies Day is an opportunity to reflect on our efforts to control this deadly disease and remind ourselves that the fight is not yet over. Several major world health organizations, including World Health Organization (WHO), World Organization for Animal Health (OIE), and the Food and Agriculture Organization of the United Nations (FAO), have pledged to eliminate human deaths from dog-transmitted rabies by 2030. In countries like Haiti and Ethiopia, we are optimistic that elimination of canine-transmitted human rabies deaths may be possible by this date with continued commitment of the Ministries of Health, Ministries of Agriculture, and other health entities in each country, working together with the support of international partners such as CDC.