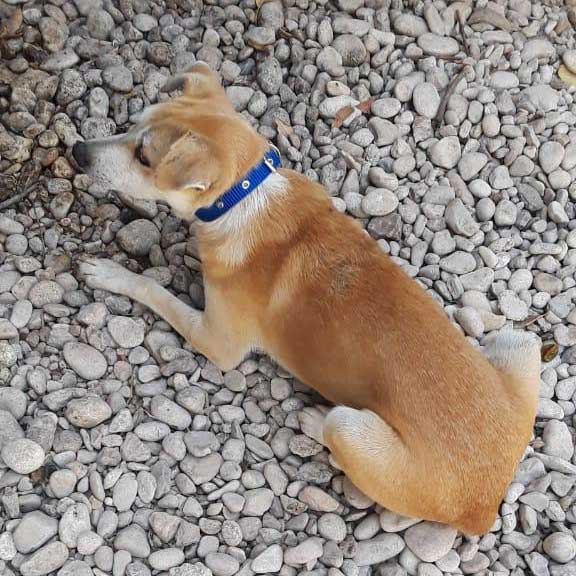 One of the dogs fitted with a GPS track collar near the border between the Dominican Republic and Haiti. Epidemiologists tracked dogs to better understand how canine rabies could be spreading between the two countries.

In January 2019, CDC called upon Universidad del Valle de Guatemala (UVG) veterinarian David Moran to support a multipartner response to a rabies outbreak in a province of the Dominican Republic bordering Haiti. Three children under the age of 10 had died after infected dogs bit them between July and December of 2018. A serious outbreak required new tools to address this fatal disease. Collars outfitted with trackers were used to monitor dogs in the area.

The children who died lived in Pedernales, a small and rural town in a province of the same name in the Dominican Republic that is walking distance from the Haiti border. Although canine rabies is endemic in both Haiti and the Dominican Republic, Pedernales Province had not reported a human rabies case in over 30 years before these deaths.

Moran and the CDC team began their efforts by meeting with local public health authorities and learning what the community was doing to try to control the outbreak. Because Pedernales borders Anse-à-Pitre, Haiti, and mixing of dog populations occurs, a binational coordinated response was initiated.

Due to the level of anxiety and concern in the community, there were reports of both domestic and street dogs being killed. It was clear that the team needed to help develop a more clear understanding of the outbreak.

Moran, an investigator with the Center for Health Studies of UVG, a long-time CDC partner, is no stranger to rabies prevention efforts in the region. This was Moran’s second time supporting rabies control activities in the Dominican Republic, but now there was the added pressure to stop more human deaths from the preventable disease and provide the community with an effective strategy to control the outbreak.  CDC brought GPS trackers that were placed in dog collars in the border town. The team was able to use these trackers to monitor dogs crossing between Haiti and the Dominican Republic.

“We delivered 10 GPS collars to a health officer from the MOH of Anse-à-Pitre in Haiti. They put the collars on dogs and we were able to see and track the dogs crossing from both ways,” Moran said. The team also noticed that people also crossed the border. “You could see a lot of interesting stuff at the border market, people crossed the border to buy and sell merchandise like vegetables, meat, eggs, seasonings, clothing, and anything else you might need and dogs crossing with them as well.”

The team also estimated the size of the local dog population in Pedernales province based on roaming status (whether a dog was always-confined to a house/yard, sometimes-confined, and always–free-roaming) to provide the number of dogs vaccinated and ensure adequate coverage of 70% vaccinated among all dogs. Research shows that once 70% of dogs are vaccinated, rabies can be successfully controlled in an area and human deaths can be prevented. The team counted dogs that were always or sometimes confined by a household survey, and a mobile application developed by Mission Rabies was used to estimate free-roaming dogs. Preliminary results showed there were more free-roaming dogs than anticipated. Adequate vaccination coverage was likely met in prior vaccination campaigns among dogs that were always or sometimes confined, but not among free-roaming dogs. 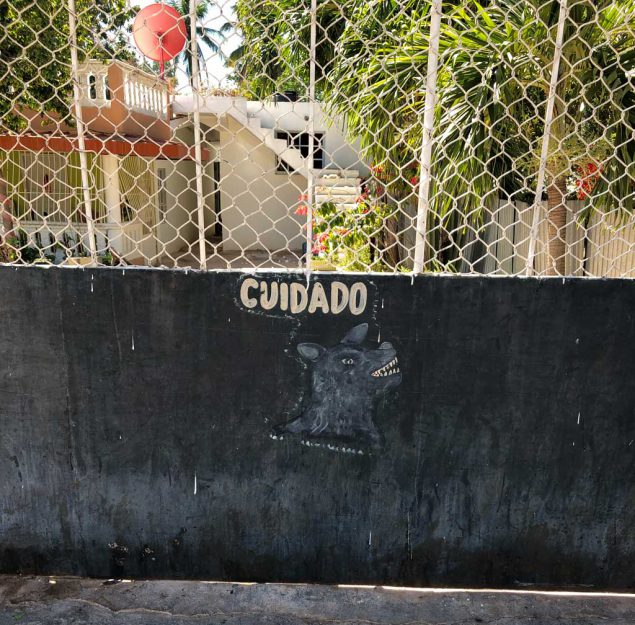 Community warning in Spanish reads “Be Careful” above the drawing of a dog baring its teeth. As seen in Pedernales, Dominican Republic.
Photo Credit: David Moran

The team presented the results to the governor, local city and public health leaders, as well as to the local community. The local government conducted an emergency vaccination campaign to increase the number of dogs vaccinated and employed teams to search for people bitten by dogs to encourage treatment and vaccination. Since this collaborative global health work at the beginning of the year, no other human deaths have been reported in Pedernales.

Technology, data, and science-based recommendations and actions helped control the rabies outbreak in Pedernales and protect the nearby community of Anse-à-Pitre. CDC continues its global health task to help eliminate rabies in Latin America and the Caribbean and achieve the goal of a world free of canine rabies by 2030.

Rabies is a fatal but preventable viral disease. It can spread to people and pets if they are bitten or scratched by a rabid animal. In the United States, rabies is mostly found in wild animals like bats, raccoons, skunks, and foxes. However, in many other countries dogs still carry rabies, and most rabies deaths in people around the world are caused by dog bites.

The rabies virus infects the central nervous system. If a person does not receive the appropriate medical care after a potential rabies exposure, the virus can cause disease in the brain, ultimately resulting in death. Rabies can be prevented by vaccinating pets, staying away from wildlife, and seeking medical care after potential exposures before symptoms start.