It’s dawn in the eastern area of the Democratic Republic of the Congo as John Saindon gets ready for another day. He is part of a team of U.S. responders working to win the fight against the Ebola outbreak. He knows that diseases are just a plane ride away and already this outbreak has seen cases in DRC and Uganda.

The job of a DART deputy usually involves long days of partner meetings with Congolese and UN agencies and aid organizations in the field. It’s a different role than the one Saindon played in the 2014-16 West African Ebola outbreak, where he worked to build a network of laboratories in Liberia and speed up the transportation and testing of specimens. 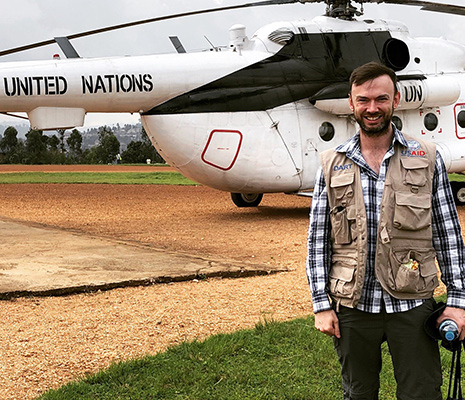 CDC’s John Saindon returns to Goma after a trip via UN helicopter to Butembo, in the eastern Democratic Republic of Congo.
Photo credit: Ben Dahl, CDC

But the current outbreak has a lot of differences from that one, he explained. The DRC is home to large and diverse population with different cultures and languages. Ongoing conflicts pit more than 100 armed groups against government troops and each other.

“This is probably going to be among the most challenging endeavors CDC has participated in, just because of the complexity. “But if this was easy, we wouldn’t be here,” said Saindon. “Here I feel like we’re writing the textbook as we go” Saindon said. “CDC responders are putting in countless hours to end this outbreak and protect local and global communities from this health threat. “They’re enduring a lot of challenges being out here, away from family,” he said. “The American people should really be proud of the work the agency and the responders are doing.”

Saindon grew up in Wichita, Kansas, and came to CDC by way of the U.S. Army. He enlisted in 2002 and immediately expected to be deployed to the Middle East, but the service had other plans.

“They suggested I should be a lab tech,” he remembered. “They kept sending me to more and more schools.”

Eventually, he earned a doctorate in health sciences and spent a tour of duty in Iraq, where he conducted health readiness programs for troops and environmental health reviews of U.S. installations that were about to be returned to Iraqi control. He’s still in the reserves as a major in the Army’s Medical Service Corps, and has served in Jordan, Korea, Bahrain, Qatar, Kuwait, and Cameroon. Saindon credits the US Army deployment experiences for his comfort with long assignments overseas.

In Goma his day typically start before dawn, checking overnight e-mail and getting in some exercise. Keeping a daily routine is important when deployed, he shared, and helps him prepare for an unpredictable day ahead.

“Every day is a Monday. Every day is a different challenge and opportunity, and some days there are multiple challenges,” he said. “But I like to see the positive side of everything because you have to. If you find the negativity in everything, you’ll burn out quickly.”