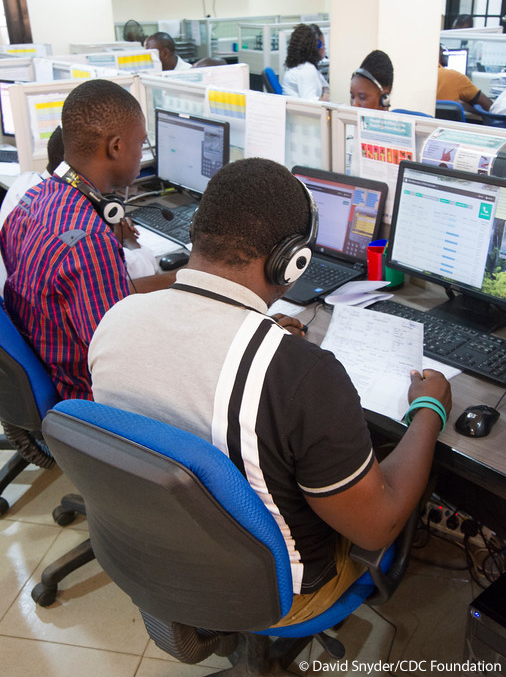 Freetown, Sierra Leone - The 7-1-1 section of the 1-1-7 call center at the AFCOM building in Freetown. The 7-1-1 number is used for Ebola vaccine trial participants, while the 1-1-7 number is the national Ebola hotline. The CDC Foundation provides support to both centers.

At the 1-1-7 Ebola Call Center in Freetown, over 100 operators work in three shifts to answer questions about Sierra Leone’s outbreak 24 hours a day, 7 days a week. They work at a steady pace, on up-to-date software systems, answering callers’ questions and entering requests for ambulances to pick up people with Ebola symptoms. They also log requests for burial teams to come to homes where they remove the bodies of the people who died to be tested for Ebola and receive safe and dignified burials.

The call center did not always run this smoothly or with current capacity. Before CDC, the CDC Foundation, and eHealth Africa worked together to upgrade equipment and expand the number of call responders, the call center could only handle 100 calls a day. Until August 2014, only seven people worked in a cramped space taking calls from 8 AM–4 PM. Unable to get though on the call center lines, people were frustrated, frightened, and sometimes angry. Unanswered calls contributed to delayed pick up for bodies and increased, by days, the amount of time before sick people could be transported to medical care. Both types of delays increased the risk of Ebola infection to families and communities caring for the sick or mourning the dead.

With funds from the Paul G. Allen Family Foundation distributed through CDC Foundation, the call center was moved to a larger facility, adding 60 operators. Call center infrastructure improvements were made, including new computers and stations for people answering the phones and up-to-date software. eHealth Africa provided technical and management expertise for the call center. Operators for the 1-1-7 line were trained based on newly created protocols for talking to callers. The protocols helped call center workers respond more quickly and efficiently. CDC’s communication specialists and behavioral scientists created scripts and scientifically accurate content for 1-1-7 operators to respond with empathy to callers’ questions. New partners contributed so that, at its peak the 1-1-7 Call Center was able to answer 80,000-100,000 calls per week.

The impact of the Paul G. Allen Family Foundation’s investments in the 1-1-7 Ebola Call Center is  felt far beyond Freetown. When call center operators enter information from each call into the state-of-the-art database developed by eHealth Africa, it is transmitted simultaneously in real time to eight districts. District call centers have also been built using eHealth Africa equipment and are integrated into the national system. District liaisons, trained by eHealth Africa and funded by the CDC Foundation, use information from the call center alerts and database to notify ambulance, surveillance, and burial teams about potential new cases, triggering specific response activities. District surveillance officers (DSOs), who work closely with CDC’s epidemiologists in Sierra Leone were hired with CDC Foundation contributions. They answer notifications from the call centers. They can react quickly because they know exactly how to reach houses. Having mapped their districts with chiefs who are leaders for each area, the DSOs are familiar with the residential areas, and they know how to find houses which are in rural areas, remote villages, or tucked behind other structures.

The 1-1-7 Ebola Call Center’s integrated alert systems and trained staff have substantially contributed to the dramatic reduction in time from when a call is received to service delivery. Before the system was in place, the average time between notification and ambulance or burial team pick up was 5 days. Now, in 95% of cases, it is less than 24 hours. The reduction in time saves lives. The less time a sick person or a person who died is in the home, the less exposure there is for family and the more hope there is for those who need to reach medical treatment.

The call center collaboration between CDC, the CDC Foundation, eHealth Africa, and other partners increased surveillance capacity in Sierra Leone. Using call center data, eHealth Africa conducts analysis and situation reports on numbers of deaths reported and topics of concern to callers. This provides Sierra Leone’s emergency management system more robust data from which to characterize and respond to the outbreak and for communication teams to develop messages and community engagement strategies to address callers’ concerns.

Six months after CDC and the CDC Foundation responded to the need to rebuild and redesign Sierra Leone’s 1-1-7 Call Center, its success has attracted attention and new donors. The United Kingdom’s Department of International Development (DIFID) and the Bill and Melinda Gates Foundation have made contributions resulting in a doubling of the number of operators and lines available and updating and enlarging the capacity of software to accept and process call data. According to former Ehealth Africa Sierra Leone Country Director Susanne Kirkegaard, the government of Sierra Leone and partners are “now talking about turning the Call Center into a permanent resources, the political will to maintain it is there.”