Defeating Diarrhea: CDC and Partners Tackle Causes and Consequences in Kenya and Beyond

“What if we lost 50 city buses full of children today?” asks Michael Beach, the associate director for healthy water in CDC’s National Center for Emerging and Zoonotic Infectious Diseases. “That’s 2,195 children—the number who die daily of diarrhea around the world. That’s more than die from AIDS, malaria, and measles combined.”

Diarrheal diseases account for 1 in 9 child deaths worldwide, making diarrhea the second leading cause of death among children under the age of 5.

Burden and aetiology of diarrhoeal disease in infants and young children in developing countries (the Global Enteric Multicenter Study, GEMS): a prospective, case-control studyExternal, The Lancet, May 14, 2013

The Global Enteric Multicenter Study (GEMS)External is the largest, most comprehensive study of childhood diarrheal diseases to date. Funded by the Bill and Melinda Gates Foundation, the GEMS study identified the top diarrhea-causing pathogens, the burden of diarrheal illness, and its consequences across the seven GEMS sites in seven developing countries (Mali, The Gambia, Kenya, Mozambique, India, Bangladesh, and Pakistan) over a 3-year period.

The GEMS site in Kenya was located within the Kenya Medical Research Institute (KEMRI)External and CDC Health and Demographic Surveillance System area in Nyanza Province, western Kenya. This site was selected because of its high HIV prevalence and low access to critical interventions – including oral rehydration solutions and improved water sources. KEMRI and CDC scientists conducted the study, overseen by principal investigator Robert Breiman, with support from CDC’s Division of Foodborne, Waterborne, and Environmental Diseases. 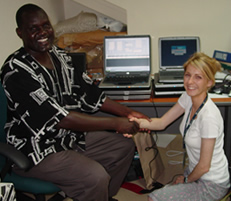 Richard Omore, the GEMS Kenya study coordinator at KEMRI in Kisumu, Kenya, and Ciara O’Reilly, CDC Atlanta epidemiologist in the Waterborne Diseases Prevention Branch, celebrate getting a search engine for randomization of controls in the GEMS case-control study up and running and loaded on laptops for each of the GEMS clinics. The computers were donated by the CDC Atlanta excess old supplies unit.

Similar to other GEMS sites:

GEMS found that a single episode of moderate-to-severe diarrhea had a significant impact on growth and a child’s risk of death. Growth delays at a 2-month follow-up visit were more severe among infants with diarrhea in Nyanza than at any other GEMS site. At a 60-day follow-up, children with moderate-to-severe diarrhea also had a 5.5-fold increased risk of dying compared to controls. These effects may partly be explained by the high HIV prevalence at this site. 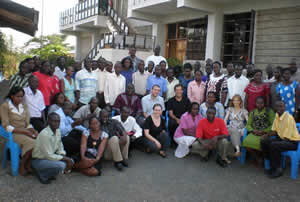 GEMS data reveal important information that can inform evidence-based diarrheal disease prevention and control strategies in Kenya. Rapidly expanding access to existing solutions, such as safe drinking water, and oral rehydration solutions, is essential. Because rotavirus was determined to be the leading disease-causing pathogen, the anticipated rollout of rotavirus vaccines in 2014 will be critical to achieving Kenya’s child survival targets. Local data particularly reinforce the importance of longer-term monitoring and nutritional rehabilitation of all children with diarrheal diseases. Instituting a follow-up visit after initial treatment, either in a healthcare setting or at home, could dramatically improve health outcomes. In addition to the rollout of rotavirus vaccine, intervention studies informed by GEMS data are already underway at the KEMRI/CDC site, such as a trial of household ceramic water filters as an intervention to remove Cryptosporidium from drinking water, a parasite that is not eliminated by traditional chlorine treatment.