An initiative aimed to increase tuberculosis (TB) control in clinical settings is improving the health system’s response capacity to the disease in Mozambique, one of the 20 countries most affected by the epidemic. 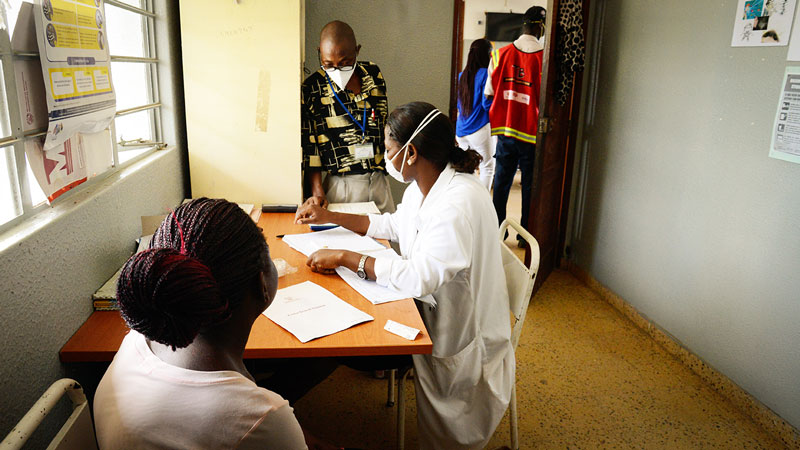 When 21 year-old João Jaime sought for medical assistance he felt very sick and had no energy or appetite. In the waiting room of the Marracuene Health Center, in Maputo Province, he was approached by Ali Eduardo Tembe, a Cough Officer, who quickly sent him to the tuberculosis screening services of the health facility. Jaime was born HIV-positive and started HIV therapy at age 16, but he was not taking his medication with the needed regularity.

“My uncle took me to the hospital, where I met Ali Tembe. The nurse took a sample to test and they quickly saw that it was TB. Later, the doctors discovered that I was infected with multidrug-resistant TB (MDR-TB),” recounted Mr. Jaime. After a six-month hospital stay, Mr. Jaime is grateful to be at home recovering with his family, which might not have been possible if he wasn´t spotted by a Cough Officer.

Funded by the U.S. President’s Emergency Plan for AIDS Relief (PEPFAR), the “Cough Officer” program is implemented with technical assistance from the U.S. Centers for Disease Control and Prevention (CDC) and its implementing partner Jhpiego (an affiliate of Johns Hopkins University), in close coordination with the Ministry of Health of Mozambique. The program was symbolically launched nation-wide during the World TB Day celebrations, on March 24, 2016.

In sub-Saharan Africa, TB is a major public health threat, and in Mozambique the situation is no different. The World Health Organization’s (WHO) estimates that 154,000 TB cases occurred in Mozambique in 2015, but fewer than 62,000 of these cases were diagnosed. This means that for every 10 cases, six were not discovered and, therefore, not treated.

As in other countries with a generalized HIV epidemic, TB disproportionately affects people living with HIV/AIDS (PLHIV) in Mozambique—one in two new cases—and is the leading cause of death among this segment of the population. Data from WHO shows 54,000 deaths were associated with TB in 2015, with more than 60% of these deaths occurring among PLHIV. Initiatives such as the “Cough Officer” program support TB control and prevention among PLHIV and others, a priority for PEPFAR and CDC.

The Cough Officer program is designed to provide an effective response to TB in clinical settings.   The Cough Officers are trained to identify suspected cases at the point of entry to health services to ensure adequate clinical follow-up and reduce the chances of new infections among patients and healthcare providers.

“The role of the Cough Officer is very important because the healthcare providers never know the health status of the patient until they enter the exam rooms,” explains Mr. Zacarias Chissequere, the TB Program Supervisor of the Maputo Provincial Health Directorate. 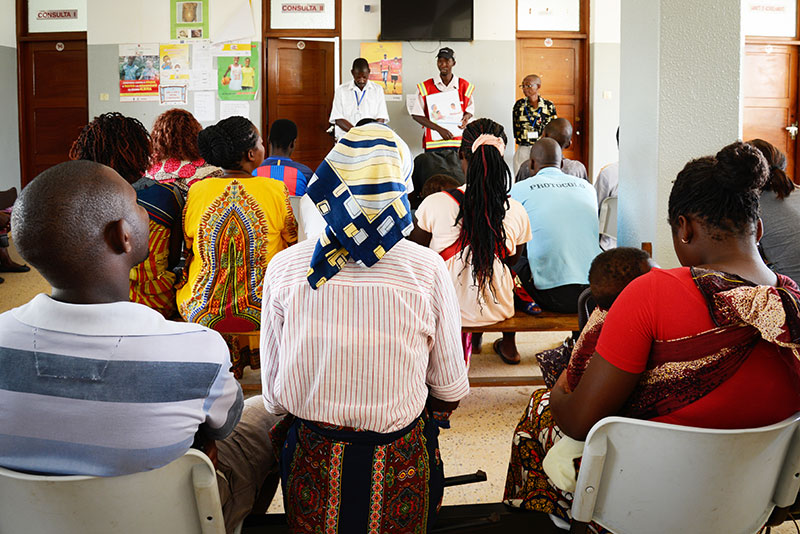 Before starting to work as a Cough Officer, Ali Eduardo Tembe participated in a short intensive training to “learn the symptoms of TB and effective ways of preventing and transmitting the disease.” Each day at the Marracuene Health Center, he starts the morning with an educational lecture for the patients in the Health Center waiting room. Simultaneously, he looks for possible signs of TB infection in the patients.

“I check the patients to see if they are coughing. I also talk to people who have prolonged fever, sweats at night, or who have a lack of appetite or weight loss,” explains the Cough Officer, adding that he routes the patients he identifies to an open-air area where they await their turn to be seen by healthcare workers at the TB screening services.

Mr. Chissequere explains that “not all patients seek health services at the clinic because they are coughing.” For this reason, the work of the Cough Officer “ensures that no opportunities are missed for detecting TB cases at the health facilities,” and the healthcare professional’s risk of contracting TB is further reduced.

In addition to supporting TB case detection, the program contributes to the dissemination of crucial information to the patients, which is particularly important considering the low level of health literacy in Mozambique, Mr. Chissequere adds.

In the Cough Officer program’s first year of implementation, the lectures given by the 150 cough officers reached 100,000 patients. In addition, their work was directly responsible for the identification of more than 17,000 cases of suspected TB infection, including João Jaime’s case of MDR-TB.

“I urge people to treat TB and not stop taking the drugs, because TB has a cure,” he says.

CDC has been providing direct technical assistance to the National TB Program in Mozambique for more than 10 years, focusing on integration of TB/HIV services, strengthening of surveillance systems, and diagnosis and treatment of drug-resistant TB.