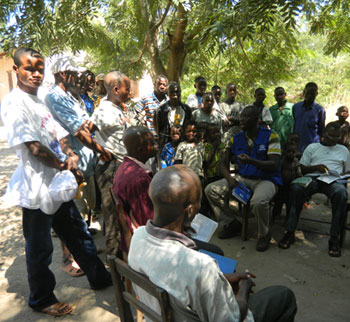 Staff from the DRC Ministry of Health sensitizes community members regarding polio and vaccination in Ankoro Zone de Santé, Katanga Province, a zone with communities who have a history of refusing vaccination for their children.

While the Democratic Republic of Congo (DRC) had been one of the countries that had stopped polio transmission in the past, poor vaccination coverage has contributed to polio virus circulation and measles outbreaks in Katanga Province in recent years. The problem of poor vaccination acceptance among religious communities in the north of Katanga Province came to the forefront in 2011 after monitoring data revealed high rates of refusal of polio vaccination during National Immunization Days conducted as a polio outbreak response. Wild polio virus (WPV) is suspected to have circulated, undetected, for several years in and around this province, as evidenced by the detection of 12 cases there in 2011. Now, CDC, UNICEF and various global partners are funding a project to increase the acceptance of polio vaccination among resistant communities in Katanga by employing an effective, new communications strategy, known as the SALT Approach.

The SALT Approach (Stimulate, Appreciate, Listen/Learn, Transfer) is an innovative communication strategy that aims to develop local, creative responses that are rooted in local strengths. It focuses on creating local ownership through a process of community discussion, reflection, learning, and action and uses the power of connecting communities for exchanging knowledge between localities. Ultimately, if done well, it facilitates a viral spread of local action in a geographical area leading to high cost-effectiveness compared to other training and communication programs.

The project is being implemented by RDC Compétence, a non-governmental organization based in Kinshasa, DRC and is being overseen by UNICEF-DRC and CDC staff based in Atlanta, with support from the Constellation Global Support Team and the DRC Ministry of Health. The CDC is providing funding for the effort through the Global Immunizations Division and a CDC Innovation Fund grant, with the remaining funding provided by UNICEF.

Efforts will focus specifically on certain high-risk communities in Katanga province, where previous communication strategies have not led to increased acceptance of polio vaccination. Further investigation in late 2011/early 2012 revealed that these communities have a long history of refusing vaccinations for their children, leaving the children and the community vulnerable to outbreaks of vaccine-preventable diseases like polio and measles. Moreover, the refusal of polio vaccination is a threat to polio eradication efforts in DRC, and worldwide. Nine of the 12 WPV cases from Katanga province in 2011 were children from these religious communities. 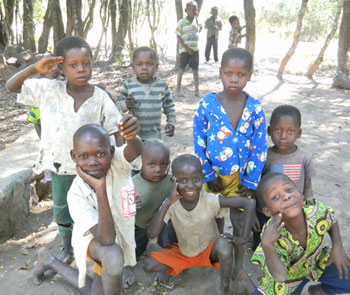 Children in Ankoro zone de santé, Katanga Province, a zone with communities who have a history of refusing vaccination for their children.

In the past, communication about polio vaccination in Katanga province has primarily depended upon volunteers or health post staff with few resources and no formal training in effective strategies for allowing communities, themselves, to discover the benefits of vaccination. Locally-tailored, specialized communication strategies have not been extensively used among these communities, and this will be the first project to apply the SALT Approach to increase polio vaccination acceptance in Katanga.

The SALT Approach can be extended to additional religious communities in Katanga and other provinces once this pilot project has been completed. Moreover, an intensive planning exercise will be conducted with health post staff involved in the pilot, so that implementation of the strategy and gains are maintained. Training activities and mapping of communities is already underway, and the project will be completed by the end of 2013. It is expected that acceptance of polio vaccination will increase in these communities, leading to higher population immunity and sustained interruption of polio virus circulation in DRC.