On the Path to Sustainability: Combination HIV Prevention and Surveillance and Control of Sexually Transmitted Infections among Key Populations in Central America 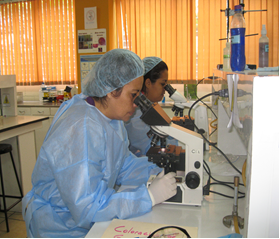 Laboratory specialists from the Salvadoran Ministry of Health process samples for STI diagnosis. Laboratory-based STI diagnosis for key populations was limited or unavailable before the establishment of the VICITS strategy..

In Central America, the HIV/AIDS epidemic is concentrated with low prevalence among the general population, but high prevalence among certain sub-groups such as men who have sex with men (MSM), transgender women (male to female), and male and female sex workers (SW); named key populations. Other priority populations include people living with HIV (PLHIV), clients of sex workers, the Garifuna ethnic group, and the military population. Since 2006, Central American Ministries of Health alongside the U.S. Government’s agencies such as CDC Central American Regional Office (CDC-CAR) have implemented the Sexually Transmitted Infection (STI) surveillance, prevention and control strategy, known as VICITS by its Spanish acronym. VICITS is an intervention for key populations that includes the provision of a combination-prevention package, integrated STI diagnosis and treatment, condom promotion and distribution, HIV counseling and testing, antiretroviral treatment referral, collection and analysis of key behavioral and biological indicators, a second-generation HIV surveillance information system for the key populations and people living with HIV (PLHIV). The VICITS strategy was established through technical assistance from the U.S. President’s Emergency Plan for AIDS Relief (PEPFAR) as a response to the overwhelming evidence on the concentration of the HIV epidemic in specific key populations. As of March 2014, 30 health establishments are currently being supported through VICITS strategy and 17 additional clinics will adopt the VICITS strategy by the end of September 2014. A total of 13,510 persons from different key populations received the prevention package during 2013 in Central America, with 512 people testing positive for HIV- representing 71% of all positive tests diagnosed through USG supported services. Country teams increasingly tailored innovative strategies to reach hidden layers of key populations, including social media promotion in Facebook and Twitter in Guatemala and El Salvador, web-based appointments in Guatemala, and discrete outreach stands at universities and other public venues in Honduras. 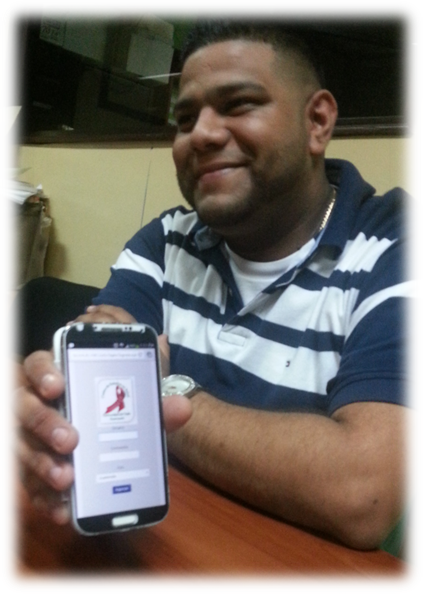 In 2013, remarkable improvements were done in the integration of VICITS databases within national health information systems. VICITS databases are now hosted within such structures in 5 out of the 6 countries where the strategy operates—Costa Rica, El Salvador, Guatemala, Nicaragua, and Panama. Additionally, CDC-CAR staff worked alongside national counterparts to establish web-based platforms for VICITS, and as a result, accredited Ministry of Health staff can access VICITS data in real-time in the above countries. Honduras—the remaining country—will follow suit as HIV and STI surveillance is transitioned from the National AIDS Program to the National Health Surveillance Department. In Guatemala, the VICITS system was integrated into the Ministry of Health information system thus eliminating a parallel system. Ministries of Health increasingly employed VICITS data in key national documents. In Honduras, VICITS prevalence and condom use results were prominently featured within the country´s Global Fund proposal and performance framework as well as the evaluation of the National AIDS Strategic Plan. VICITS is also the source of the one of the five HIV priority indicators selected by National AIDS Programs for annual reporting to the Council of Health Ministers of Central America (COMISCA), as part of the organization’s monitoring of the regional health situation.

Uptake of VICITS as a country-owned and country-driven strategy by Central American Ministries of Health has continued at an accelerated pace during fiscal year 2014. Services are provided within existing public establishments and health providers are hired by the Ministry of Health through national funding, which also covers all STI treatment costs and the majority of laboratory reagents. In Nicaragua, the Minister of Health signed into effect the National Guidelines for Sentinel Surveillance of STI among Key Populations, officially designating VICITS as part of the National Family and Community Health Model. In Honduras, VICITS committees have been formed to share VICITS oversight between national and local representatives from the Ministry of Health, MSM NGOs and other community-based organizations. 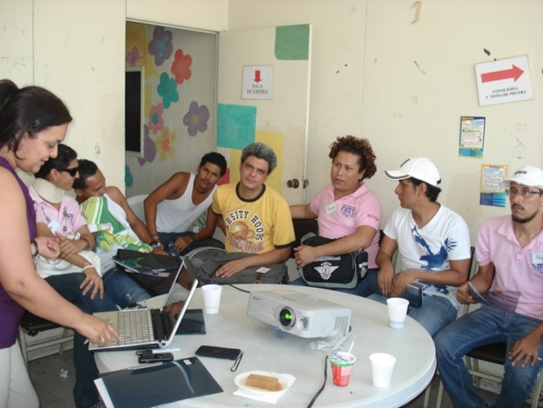 MSM leaders gather for a meeting of the VICITS committee in San Pedro Sula, Honduras. Such committees are formed to share strategy oversight between national and local representatives from the Ministry of Health, MSM NGOs and other community-based organizations

CDC-CAR has developed a sustainability tool to assess and facilitate the gradual process of fully transitioning implementation of VICITS clinics to the Ministries of Health in the region. This scaled tool measures progress in 5 key sustainability elements: laboratory, medical services, Ministry of Health integration, human resources, and information systems within 3 phases of country-ownership transition: establishment, scale-up, and institutionalization. Every clinic has its own transition plan and it is assessed and reviewed semi-annually.

As Central American Ministries of Health prepare to scale up VICITS in the upcoming years with technical assistance from CDC-CAR, increasing the numbers of key populations with access to high-quality, evidence-based STI and HIV prevention services through a sustainable, country-driven strategy will put countries on a path to achieving an AIDS-free generation.