How We Started – The CDC Rwanda Story 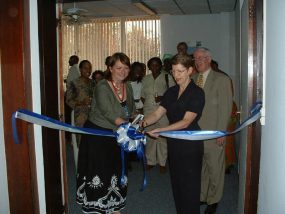 Although CDC officially opened office in Rwanda in 2002, CDC’s story in Rwanda actually begins much earlier in 2000, and much farther away, in Atlanta, Georgia at the CDC headquarters.

In 2000, CDC pioneers the early HIV response in Africa as the ‘Life Initiative.’ At this time leaders from around the world acknowledge that HIV/AIDS is a global threat that needs to be addressed with concerted global efforts. The U.S. and UN Security Councils each declare that HIV/AIDS is a security threat. In the same year, CDC expands its ‘Life Initiative’ to become the newly established Global AIDS Program (CDC/GAP).

During this time, for many people in Africa, HIV is a death sentence. For Rwanda, a small, landlocked country in central-eastern Africa, HIV/AIDS is having a devastating toll on its people

In 2002, 9.1% of pregnant women in antenatal clinics are testing positive for HIV. Only an estimated 870 people, out of thousands of people living with HIV (PLHIV) in Rwanda, are able to access antiretroviral drug treatment (ART). Many are dying from AIDS for lack of access to ART.

The CDC/GAP program identifies Rwanda as one of its 25 countries of focus, and in 2002 opens an office on the 2nd floor of the Development Bank of Rwanda building. The building is in the center of the capital, Kigali, and is directly across the street from the U.S. Embassy.

The CDC/GAP Rwanda country program is completely focused on one goal: supporting the Rwanda government in its goal to get life-saving treatments to people infected with HIV, as well as TB, and to ultimately end these twin epidemics in Rwanda. One hundred percent of CDC’s staff and resources are directed toward this goal.

However, with an initial staffing of about 10 employees and a budget of about one million U.S. dollars the task ahead is daunting. 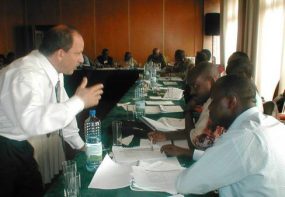 With the introduction of the U.S. President’s Emergency Fund for AIDS (PEPFAR), CDC Rwanda focuses its efforts on supporting the implementation of PEPFAR programs in Rwanda. The CDC/PEPFAR partnership with the government of Rwanda, in collaboration with other USG agencies and health development partners, leads to many significant accomplishments, including support for an increasing number of PLHIV on ART. The HIV prevalence among pregnant women in antenatal care decreases to 2.6% by 2010. By 2005, Rwanda’s national HIV prevalence is estimated at 3% and is sustained at this level through 2010.

The early years also see the CDC Rwanda country program begin to expand its scope beyond HIV/AIDS to include support for Rwanda’s malaria and avian influenza initiatives.

In 2005, malaria is the leading cause of disease and death among children and adults in Rwanda. CDC, through the support of the U.S. President’s Malaria Initiative (PMI), begins supporting Rwanda’s National Malaria Control Program in 2006. The incidence of malaria decreases by 74%, and the burden of disease transitions from a nationwide distribution to 70% of the malaria burden concentrated in districts along the border in the Eastern and Southern province. 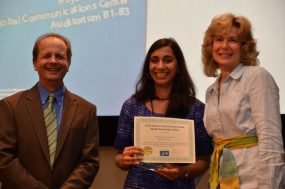 Cases of malaria in Rwanda drop from 8% percent in 2010 to 3% in 2011. Malaria-related deaths also drop from 13% in 2010 to 6% in 2011. However, malaria cases increase more than tenfold – from 225,176 cases in 2011 to 2,662,706 in 2015. In spite of this steep increase in reported cases, the number of deaths due to malaria increase less than two fold. CDC will continue to work closely with the Ministry of Health (MOH), through PMI, to support Rwanda’s goal of achieving the malaria pre-elimination phase.

As of December 2016, CDC, through PEPFAR, supports ART for approximately 52% out of all Rwandan adults and children receiving ART in Rwanda, and the health facilities offering HIV services increase to more than 500 by 2016. In 2016, 92% of patients were retained on ART after 12 months of ART initiation. Treatment success rates for TB – the leading cause of death among AIDS patients – has increased from 58% in 2003 to about 90% by mid-2016.

Rwanda is now among the countries leading the race to eliminate mother-to-child-transmission (MTCT) of HIV, with MTCT rates currently stabilized at below 2% per year. CDC is working with the MOH to end MTCT in Rwanda.

CDC continues to work with the Ministry of Health to help realize the goal of ending AIDS in Rwanda by 2020.

In 2012, CDC initiates a National Public Health Institute project to support Rwanda’s Biomedical Center/Institute of HIV/AIDS, Disease Prevention and Control (RBC/IHDPC) to enhance its leadership role as the principal technical agency for public health within Rwanda, through strengthening the capacity of its newest unit, the noncommunicable diseases (NCDs) division to support ongoing efforts to address the growing threat of NCDs in Rwanda. CDC continues providing support for new and emerging public health threats in Rwanda.