The Snowball Effect—Battling Malaria on a Global Stage 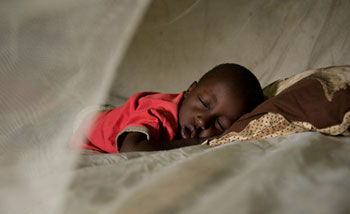 For children under five in particular, like 3-year-old Fadhil Smith, 3, bed nets provided by the CDC can literally mean the difference between life and death. CDC figures show that where once children were exposed to as many as 300 infected mosquito bites each year, the number today is closer to three.
© David Snyder/CDC Foundation

In a district hospital in western Kenya, more than 200 mothers and children crowd into a small room, hoping to be seen by the hospital’s one outpatient healthcare worker. Inside the hospital is an even bleaker scene. Two, three, or even four seriously ill children lie piled on a single hospital bed. When the nurses prick their small arms to give them transfusions or medicine, their blood is pale pink instead of a healthy red, destroyed by the malaria parasites that have feasted on their tiny bodies.

These are images that Dr. Laurence Slutsker, the associate director for science in CDC’s Center for Global Health, knows well. They have been burned into his memory for more than two decades—and are one of the many reasons he has dedicated his life to fighting malaria on a global scale.

The mosquito kills more people than any other creature in the entire world. While malaria was eliminated in the U.S. in the late 1940s, approximately half of the world’s population is still at risk. Eighty-five percent of the world’s malaria deaths occur in Africa, where a child dies from malaria every 45 seconds.

When Dr. Slutsker started working on the prevention and control of malaria in the 1980s as an EIS officer at CDC, he was new not only to working with the disease, but to global health work as well. “I was a complete novice,” he says. But as he started talking to staff in CDC’s Malaria Branch, he became fascinated. “EIS is sort of an adventure,” says Dr. Slutsker, who was quickly dispatched to western Kenya to investigate a mysterious epidemic of severe anemia. It was there that he encountered devastating hospital wards with dying children, few trained healthcare workers, and even fewer resources.

“People were relying on treatment, but the treatments weren’t working because of increasing resistance of the parasite to malaria drugs,” explains Dr. Slutsker, who worked to trace the anemia to its root cause, malaria. “That’s a problem that unfolded across the African continent. Hundreds of thousands of people across Africa lost their lives.” “I was overwhelmed,” he admits, “but I understood that this was a place where you could make a huge difference.”

While there were few resources for combating malaria when Dr. Slutsker originally visited Kenya, today there are a number of malaria control and prevention programs. “The use of treated bed nets, which can dramatically reduce exposure to malaria carrying mosquitoes, has been particularly effective in driving down the number of new cases,” explains Dr. Slutsker. “This snowball effect is helping researchers and health professionals limit the impact of malaria in areas where cases can be contained, and begin to control it like an outbreak of any infectious disease.” Treatments such as these have helped decrease deaths from malaria by more than 10 percent from 2008 to 2009.

But while there has been significant progress in the fight against malaria, there is still a need to do more. “I really do think we will eradicate malaria someday,” says Dr. Slutsker, who will always remember the children he saw on his first trip to Kenya. “It’s not going to melt away all at once. I think we will get there, but we have to invest in programs and in developing new tools.”