When local fishermen in Uganda spotted a massive die-off of migratory birds, it raised an alarm for the country. In January 2017, in the Lake Victoria island and lakeshore districts of Kalangala, Masaka, and Wakiso, about 10,000 white-winged black terns died unexpectedly, and health experts needed to find out why.

Upon receiving news of the die-off, Uganda’s Public Health Emergency Operations Centre (PHEOC), which coordinates all health security matters for the country, immediately launched into action. CDC experts have been working closely with Uganda to strengthen the country’s ability to respond rapidly to emergencies. Because of these efforts, the PHEOC was able to quickly coordinate a response that brought together experts in human and animal health, disease detectives, laboratories, surveillance teams, and support from both Uganda’s government and global partners.

Similar incidents in Europe, Egypt, and Tunisia, where the migratory birds begin their journey south, pointed to a possible outbreak of avian influenza. Avian influenza (or avian flu) viruses are influenza A viruses that occur naturally in wild aquatic birds worldwide and can infect domestic poultry and other bird and animal species. Avian flu viruses do not normally infect humans. However, sporadic human infections with specific types of avian flu viruses have occurred, some of them with severe and even fatal consequences.

Flu viruses are constantly changing, and animal flu viruses can change and infect humans and gain the ability to spread easily between people, causing a pandemic. For this reason, monitoring for human infection and person-to-person spread of avian flu viruses is extremely important for global health security.

Upon being notified of the migratory bird outbreak, Uganda’s PHEOC quickly reached out to various experts and engaged the country’s National Task Force for Epidemics. The National Task Force called on rapid response teams from across all sectors, including disease detectives from the CDC-supported Field Epidemiology Training Program (FETP), as well as veterinary and public health students from Makerere University’s One Health Program, to investigate.

With support from CDC, Uganda’s expert laboratory teams were able to provide initial laboratory confirmation of the first outbreak of highly pathogenic influenza A(H5) virus in birds in East Africa within days of detecting the wild bird die-off. The response included guidance for management of dead or sick birds and enhanced surveillance in humans; no human infections were identified.

Uganda’s ability to coordinate this rapid response is one more inspiring result of the joint commitment between CDC and Uganda to strengthen global health security and move toward a safer, healthier world for Americans and all people alike.

The work in this story builds on almost a decade of the CDC influenza program’s collaboration with Uganda to strengthen surveillance, response, and diagnosis for influenza viruses. The recent response efforts were supported by partners including CDC’s Influenza Division and Uganda’s National Influenza Center, in collaboration with FAO, OIE, and the National Animal Diseases, Diagnostic and Epidemiology Centre (NADDEC).

CDC is working with 31 priority countries to develop global health security capabilities, which protect Americans and people around the world from disease threats. This story illustrates Uganda’s commitment to: 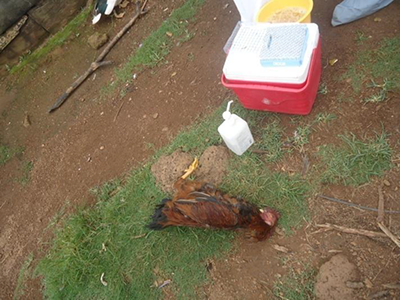 Dead bird at the affected site of Kalanga District, Uganda.