Real-time polymerase chain reaction (rt-PCR) is a method to detect DNA of disease-causing pathogens in clinical specimens. This method allows for accurate and rapid detection of infectious agents in the field.

Assisting with outbreaks usually requires travelling light. But sometimes it requires hauling heavy equipment across the world. When CDC experts were asked by Ghana to assist with a meningitis outbreak, they arrived lugging a PCR machine, an instrument used in a laboratory that can confirm disease diagnoses through molecular detection. The team had carried the machine all the way from their lab in Atlanta. 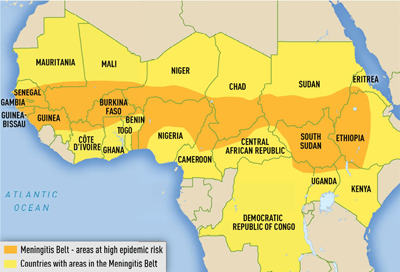 The "meningitis belt" runs from Senegal in the west all the way to Ethiopia in the east.

Between December 2015 and February 2016, Ghana reported over 1,000 cases of meningitis, including 125 deaths. Bacterial meningitis is a severe acute infection. Even when treated with antibiotics, 10-15% of patients die. Survivors often have permanent damage such as hearing loss, brain damage, or paralysis of the arms or legs. Epidemic meningitis has been described on the African continent for over 100 years, flaring up during the dry season every few years and striking people of all ages.

Bacterial meningitis can be caused by several different kinds of bacteria; without rapid laboratory confirmation of cases, it is difficult to determine whether a particular outbreak of meningitis can be halted by a vaccination campaign. So when the Tamale Public Health Laboratory – which serves as the reference laboratory for the meningitis belt in Ghana – was running out of rapid diagnostic kits and the lab’s PCR machine stopped working, they needed help, fast.

As luck would have it, a CDC meningitis expert was already in the country working with partners and the national government on strengthening national laboratory networks. When she learned of the outbreak, she mobilized a team to respond. 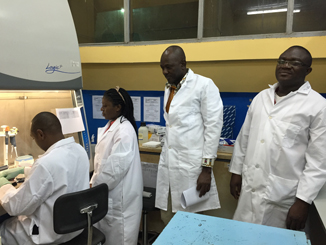 The team from Atlanta moved quickly to re-establish PCR capability at the Tamale lab. In nine days, almost 500 samples were tested and laboratory staff were trained on new methods of molecular detection. Results showed that the majority of cases in the three northern regions of the country were caused by Neisseria meningitidis serogroup W, a type of vaccine-preventable meningitis.

Armed with this data, the Ghana Ministry of Health and World Health Organization secured 160,000 doses of vaccine. The Ministry then launched a campaign that is estimated to have vaccinated more than 98% of the population in the targeted districts, preventing further spread of meningitis.

Through the quick action of staff on the ground, the Tamale lab can once again make its own diagnoses—a simple, but important, step in strengthening laboratory systems in Ghana.

This story illustrates Ghana’s commitment to implementing the Global Health Security Agendaexternal icon (GHSA), which aims to improve the world’s ability to prevent, detect, and respond to infectious disease threats.

Ghana’s investments in the Tamale laboratory will help them meet the GHSA National Laboratory Systems target, including having a nationwide laboratory system capable of safely and accurately detecting and characterizing pathogens causing epidemic disease. CDC is partnering with 31 countries around the world, including Ghana, to reach the goals of the GHSA.

CDC’s work on bacterial meningitis is led by the Division of Bacterial Diseases.