THE CHALLENGE: In the wake of the Ebola epidemic, Liberia urgently needed better public health systems to protect the country and the world against future threats.

THE SOLUTION: CDC and partners worked with Liberia during and after the Ebola epidemic to strengthen the country’s ability to respond to emergencies. In 2017, Liberia responded to a deadly outbreak of meningococcal disease within 24 hours of notification and rapidly contained its spread.

In 2014-2015, Liberia suffered more than 10,000 cases of Ebola and over 4,800 Ebola-related deaths. It took the country months to mount an effective response to the epidemic, as needed public health systems had to be built in the face of the expanding crisis.

During and following the Ebola response, CDC worked closely with Liberia to develop public health resources that did not previously exist, including emergency operations centers, enhanced laboratory capacity, stronger surveillance systems, and a CDC office with in-country staff providing technical support to the Ministry of Health. Liberia’s new systems were put to the test when, in April 2017, the country faced a cluster of unexplained illnesses and deaths. 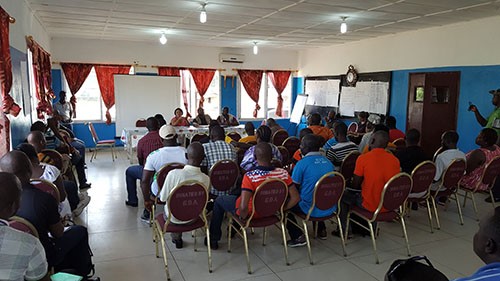 On April 25, health officials in Sinoe County noted an unknown illness among 14 individuals. Eight of them had died. All of the cases reportedly developed symptoms following their attendance at a funeral event. The incident was quickly detected and reported through the country’s surveillance and response systems – the first step in identifying when and where an outbreak might be occurring.

Within 24 hours of learning of the outbreak, Liberia’s Ministry of Health mobilized 14 CDC-trained Liberian disease detectives to investigate the report. Samples from the patients were collected and tested at the National Reference Laboratory, ruling out Ebola as the cause.

All Hands on Deck
Through Liberia’s emergency operations center, the Ministry of Health activated its incident management system to coordinate the many efforts needed to stop the outbreak. The national Rapid Response Team and partners, including CDC staff, sprang into action to support the county-led response.

Disease detectives and surveillance officers – trained by the country’s new Field Epidemiology Training Program – tracked and investigated cases while closely monitoring those who might be at risk. Health workers provided care and treatment and encouraged the community to report new cases as the cause of the outbreak was being investigated.

Laboratory testing of specimens sent to CDC soon confirmed that the country was facing an outbreak of meningococcal disease (meningitis).

Rapid Response Gets Results
Because Liberia had the ability to respond rapidly and effectively, the outbreak was detected and controlled within a matter of weeks, limiting the outbreak to 31 cases and 13 deaths, with the last case reported on May 7, 2017.

CDC works with Liberia’s Ministry of Health and partners to improve the country’s ability to prevent, detect, and respond to outbreaks. Much of this work is done through the Global Health Security Agenda. CDC focuses on building core public health systems to enable fast and effective response: surveillance, laboratory, workforce development, and emergency operations. These systems – and the people who are now trained to use them – are key to ensuring national and global health security for people in Liberia and around the world.

About This Story
The work featured in this story was accomplished through collaboration between Liberia’s Ministry of Health, CDC’s Center for Global Health, CDC’s National Center for Immunization and Respiratory Diseases, and other international and country partners. CDC support included emergency management; in-country and headquarters laboratory support; epidemiologic investigation; and communication support.

CDC is working with 31 priority countries to develop global health security capabilities, which protect Americans and people around the world from disease threats. This story illustrates Liberia’s commitment to:

CDC team works with the FETP advisor in the county health team's EOC.