Cameroon is taking lessons learned from previous outbreaks to shorten response times through their newly developed Emergency Operations Center, which serves as a role model for global health security success. In one year, experts reduced response time to a health emergency from 8 weeks to one week.

Dr. Georges Alain Mballa Etoundi was deep into his remarks Feb. 10 on the first day of a sprawling global health security meeting in Atlanta when, breaking from his script, he paraphrased a well-known proverb on self-reliance.

“It’s better to teach how to fish than to donate fish,” said Etoundi, a senior official in Cameroon’s Ministry of Health.

Etoundi’s views are valid, and they are shaped by more than informed speculation. He has his country’s history and practice as a prime example.

Etoundi was one of the first to suggest a concept that would emerge as a dominant theme during the three-day event that brought more than 300 grantees from around the world to a large auditorium on CDC’s main campus. All of them were there to discuss – face-to-face for the first time – how to forge a more failsafe, efficient, and muscular global effort to detect disease outbreaks at the earliest possible moment and to quickly extinguish them.

In his remarks on the first day and throughout the conference, Etoundi emphasized the importance of deploying newly trained people and using their skills as they are developed rather than waiting for every piece to be completed, every building to be opened, and every dusty plan to be updated.

Disease, after all, won’t wait. 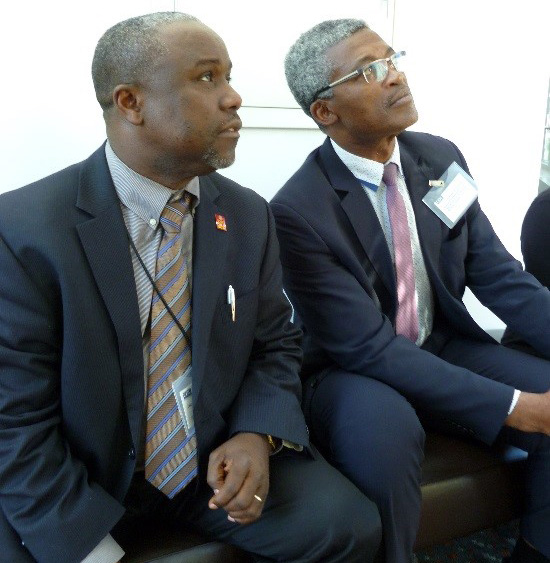 “You can talk about global health security as a concept, but if you look closely, it’s the people. You train people and tell them where we’re headed. That’s where it starts. It gives us muscle memory for how to respond to disease,” he said in a separate conversation later that same day.

This sort of training is exemplified by Cameroon’s newly developed Emergency Operations Center (EOC). And results improve with time and experience.

When Cameroon’s EOC – made up of a trained group of experts sitting in a nondescript conference room – was activated for the first time in response to a cholera outbreak, it took more than eight weeks to get organized and respond. By the time their full resources were brought to bear on the outbreak, it was nearly over. In sharp contrast, when a Lassa fever outbreak occurred just one year later, that same team took only a week to mobilize and take action.

“People are seeing the impact of this. They can see the benefits,” Dr. Etoundi said. People feel safer; more protected. “It’s not theoretical. It’s real. It’s a real thing. But it’s too early to see it easily. Come back in a year and then it will be obvious.”

Despite growing successes, Etoundi remains humble. “I never thought of Cameroon as a role model,” he said, when asked if its experience with the early stages of global health security made the country an example to follow.

“But,” he said, “if the example can help others, that’s a great thing to do.”

This story illustrates Cameroon’s commitment to implementing the Global Health Security Agendaexternal icon (GHSA), which aims to improve the world’s ability to prevent, detect, and respond to infectious disease threats.

Cameroon’s recent investments will help them meet the GHSA Emergency Operations Centers target, including having trained EOC staff capable of activating a coordinated emergency response within 120 minutes of the identification of a public health emergency.

Today, CDC is partnering with 31 countries around the world, including Cameroon, and additional countries in West Africa to reach the goals of the GHSA.