December 1 is World AIDS Day, and it is an opportunity for the global community to renew its promise of an AIDS-free generation. This year’s theme is “Increasing Impact through Transparency, Accountability, and Partnerships.”

Working on the frontlines in the fight against HIV, we at the Centers for Disease Control and Prevention’s Center for Global Health are keenly aware of the impact that our daily efforts have around the globe. Today is the day when the world joins us to reflect on the global HIV epidemic, remember those who have been lost to the disease, and recommit to an accelerated, efficient, and effective response 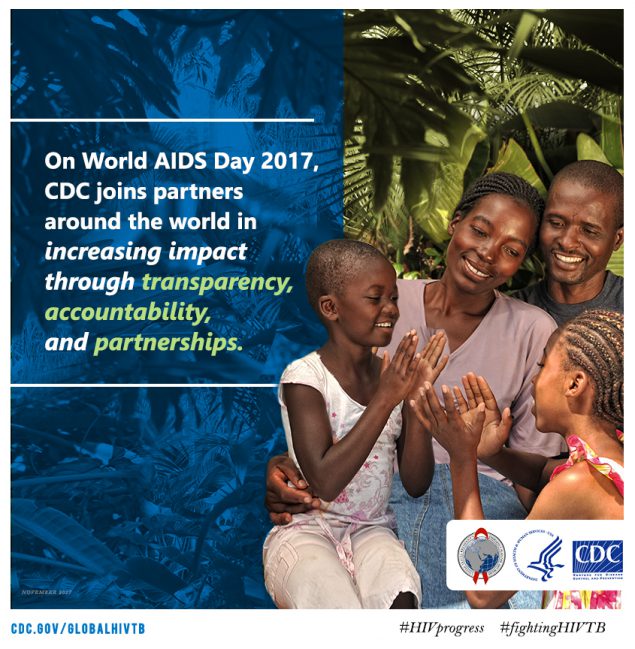 This year’s theme challenges us to work together to accelerate progress toward ending HIV as a public health threat around the world. Since the beginning of the epidemic, partnerships among governments, multilateral institutions, the private sector, community-based organizations, and many others have been key to the programs and scientific achievements that have brought us to this moment.

The end of HIV/AIDS as a global public health threat is finally in sight—and this is, in large part, thanks to the U.S. government, through U.S. President’s Emergency Plan for AIDS Relief (PEPFAR),External which has helped not only save and improve millions of lives but has also transformed the global HIV/AIDS response.

On this World AIDS Day, CDC is releasing new data affirming that global efforts to end HIV are working.

All of these examples are remarkable and demonstrate the progress we have made over the last few years, but perhaps none is as dramatic as the last one: data show that five high-burden countries are approaching control of their epidemics. Epidemic control seemed unthinkable in 2003 when PEPFAR started, but now it is an achievement that is within reach.

We urgently need to do more. We cannot stop now.

Recent data demonstrate strong progress against HIV, but achieving epidemic control requires focusing on those groups at greatest risk for transmitting and acquiring the virus. CDC and partners are on the front lines working to accelerate efforts to reach the most vulnerable populations with targeted HIV prevention and treatment.

Achieving HIV epidemic control and saving lives is not easy work. Essential, meaningful, important work never is. But the path, with its unmistakable end, is clearly before us, so on this World AIDS Day 2017, let us recommit ourselves to the goal we are working together to achieve.

We hope that on this World AIDS Day you are as proud of these accomplishments as we are — and just as inspired to keep going.