Measles is an issue worldwide. Provisional data from the World Health Organizationexternal icon (WHO) indicate that during 2019 there were more measles cases reported worldwide than in any year since 2006. More than 500,000 confirmed cases of measles were reported from more than 180 countries, many from large measles outbreaks. Case numbers in 2019 dwarfed the 353,236 confirmed measles cases reported to WHO in 2018. Measles case numbers are underreported so the numbers of confirmed cases may not reflect the full burden of measles cases in a country. According to the latest data available, in 2018, it is estimated that more than 140,000 individuals died of measles. In response to measles outbreaks, outbreak response measures have been implemented for outbreaks across the globe in 2019.

Measles is everywhere. All WHO regions are experiencing large, often extended outbreaks of the disease. Multiple countries have declared outbreaks. Outbreaks are declared when the number of cases reported in an area exceeds the expected number of cases. As the expected number is specific to the individual country. Outbreaks can range from a few cases in areas where the disease has previously been eliminated to a large number where endemic transmission is ongoing. The risk of measles virus transmission spreading to affect multiple communities within a country or across international borders is especially concerning. As long as measles is a threat anywhere, it is a threat everywhere.

Measles is extremely contagious. Around 9 out of 10 people who are not protected will become infected following exposure to the measles virus.

Measles can be very serious. In 2017, measles caused an estimated 110,000 deaths. Possible complications include encephalitis (swelling of the brain), pneumonia, severe diarrhea and dehydration, and/or permanent disability. In developing countries, approximately 1 of every 100 children with measles will die from the disease or its complications.

Measles is preventable. Because of vaccination, more than 21 million lives have been saved and measles deaths have been reduced by 80% since 2000. Additional work is required to ensure high levels of vaccination coverage in all areas. Without urgent efforts to address gaps in coverage, outbreaks like the ones occurring now will continue to occur.

What is CDC Doing

In coordination with partners including the Measles & Rubella Initiativeexternal icon and Gavi, CDC provides the following services

Diseases do not respect international borders. Diseases travel as easily as people and products. CDC protects Americans and people around the world from vaccine preventable disease, disability and death. Learn more about CDC’s role in Global Health Security. 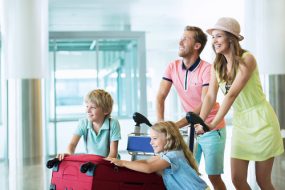 Make sure you’re protected against measles before travel.