Oral polio vaccines (OPV) have protected hundreds of millions and several generations of children against polio since licensure in the early 1960s.

Wild type 2 poliovirus was eliminated in 1999. In countries with weak immunization systems where many children are unvaccinated, the use of trivalent OPV can lead to a mutated strain of the type 2 virus (called vaccine-derived poliovirus), which causes paralysis that is indistinguishable from wild poliovirus.

The 21st century has seen a multitude of public health victories. Among them is the elimination of wild polio virus (WPV) in over 100 countries worldwide, thanks to successful vaccination programs. This is an important accomplishment because polio is a crippling and potentially deadly infectious disease. Unfortunately, polio circulation has never been stopped in three countries: Pakistan, Afghanistan and Nigeria.

As a spearheading partner in the Global Polio Eradication Initiativeexternal icon (GPEI), CDC is committed to stopping the transmission of polio in these last three countries and keeping other countries polio-free, thus erasing polio from the world forever. One way is through research. We are currently engaged in studies to: (1) assess how well different oral polio vaccines work and, (2) how different polio vaccines should be used in national immunization programs.

Objective 1 of the Polio Eradication and Endgame Strategic Plan pdf icon[PDF – 933KB]external icon is to stop the transmission of WPV worldwide by the end of 2014. Since this deadline is fast-approaching, we needed to find an institution that could help us to get high quality scientific evidence very rapidly. The International Centre for Diarrheal Disease Research, Bangladeshexternal icon (ICDDR,b) became our trusted partner with the capacity to accurately monitor the impact of polio vaccines through a long-standing demographic surveillance system established in Matlab (near Dhaka, Bangladesh) in 1966. 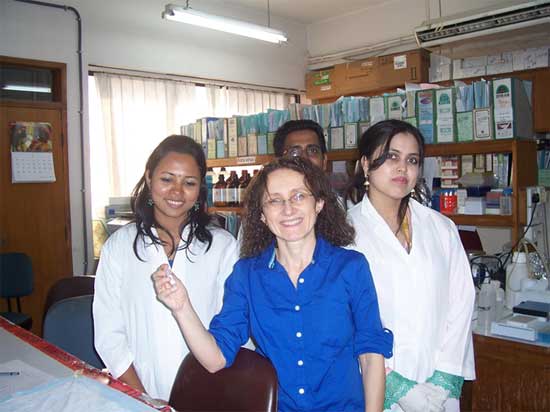 CDC’s Conchi Estivariz holds up a tube with serum from a child participating in the study with colleagues at the laboratory of ICDDR,b in Bangladesh. The staff at ICDDRB had processed the blood to obtain sera, which was sent to the CDC lab in Atlanta to measure antibodies against poliovirus and determine which polio vaccine or which vaccine schedule was more effective.

Currently there are three required doses of oral polio vaccine with 4 weeks separating each dose. In order to stop the spread of WPV in the 3 endemic countries, the GPEI has started implementing Short Interval Additional Dose strategy, which shortens the interval between bOPV doses to 2 weeks. The study with ICDDR,b will provide proof that cutting the waiting period in half will achieve high population immunity levels faster and limit the size and duration of outbreaks. Dr. Conchi Estivariz is leading the team from CDC-Atlanta. As she sees it, “providing evidence to support the short interval vaccination strategy that GPEI is already using in several high-risk areas will contribute to stopping the spread of polio faster.”  Once the study’s results validate the short interval vaccination approach, the strategy can be easily applied to all settings to stop the spread of polio for good.

Additionally, the scientific community widely accepts that using only bivalent OPV will drastically reduce the occurrence of vaccine-derived poliovirus type 2 (see box About Oral Polio Vaccines) and its ensuing paralysis. This study aims to prove that bivalent OPV can replace trivalent OPV in all immunization campaigns and routine immunization programs, as the Polio Eradication and Endgame Strategic Plan calls for by the end of 2016. Along with implementing measures to increase vaccination coverage, switching to bivalent OPV will prevent the emergence of type 2 vaccine-derived poliovirus and unnecessary cases of paralysis.

In the fight against polio it is essential to continually make advances and with this new research we plan to do just that. Dr. Estivariz knows that her research is important: “it provides evidence to support effective policies so that no child ever has to suffer from such a debilitating disease.”