Liberia: The Journey to Redemption 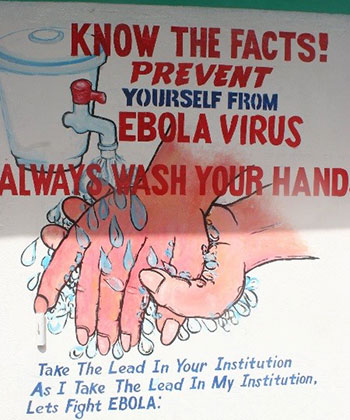 Health promotion is a key part of preventing infection in healthcare settings and in the community.

Redemption Hospital is now back on track, and stronger than it was when Ebola struck hard in the summer of 2014. Overwhelmed by a flood of Ebola cases, the hospital briefly closed during the peak of the epidemic. Now, one of the largest hospitals in the bustling capital of Monrovia has emerged as a key resource in quickly identifying and isolating Ebola cases.

During the epidemic, running water was scarce, protective gowns a luxury and even modest attempts at infection control and patient triage were beyond reach. The hospital, packed wall to wall with people in need of care, fostered conditions that made it easy for Ebola to spread amongst both patients and health workers. In all, the hospital lost 12 medical staff to Ebola.

The face of change

Today, Redemption Hospital is much improved in a host of crucial ways. With support from CDC and other partners, the basics of strong and reliable infection control are in place. Hospital staff now perform thorough triage of patients, including taking their temperatures and collecting enough information about a patient’s symptoms and potential illness to determine how best to manage their care. The triage is part of the hospital’s strategy to identify and isolate patients showing symptoms of Ebola or other infectious diseases. Patients with worrisome symptoms are taken immediately to one of the hospital’s new isolation units to prevent the disease from spreading further.

Running water is now more readily and reliably available, allowing for rigorous adherence to hand washing and decontamination practices. Where there were once 215 beds, many of which were jammed so tightly together there wasn’t space between, there are now 175, which decreases the ability of disease to spread throughout the hospital. Redemption is also home to the Men’s Health Screening Program, which provides survivor support services to male survivors of Ebola and their partners. The robust program provides counseling, semen testing for Ebola, and condoms to participants to help protect and educate survivors and their partners. 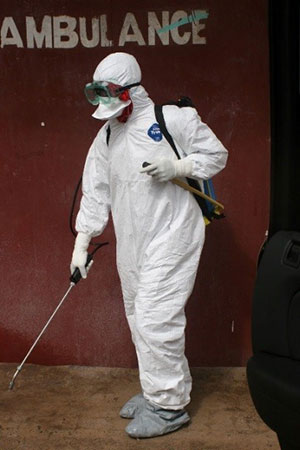 A health care worker decontaminates the ambulance area outside of Redemption Hospital in Monrovia, Liberia.

Does it all make a difference? In March 2015, a woman came to Redemption’s emergency room displaying symptoms of Ebola. Ten months before, she would have either been allowed inside, putting her in dangerous contact with other patients or, perhaps worse, she would have been turned away. Instead, she was quickly isolated and transported to an ETU. Laboratory tests later confirmed she did indeed have Ebola. Staff at Redemption Hospital used proper triage, infection prevention and control measures that ultimately prevent a new cluster of Ebola cases from occurring in Liberia. And, showing the durability of the improved response to potential health threats, the staff were called upon again when a woman exposed to Ebola in Guinea was transported to Redemption in March of 2016. Redemption Staff once again facilitated urgent testing, used appropriate protective measures, and helped ensure that control measures were immediately implemented in the surrounding community.

Collaborative work between CDC and other partners at Redemption Hospital is a shining example of what is possible when the right systems and resources are in place. This work not only improved survival outcomes for Ebola patients and healthcare workers, but it has also provided Liberia with tools to continue strengthening its healthcare capacity. Though Redemption Hospital is most certainly living up to its name, there is still more work to be done. CDC and Liberia’s Ministry of Health are committed to moving the country closer to meeting the Global Health Security Agenda goals to better detect, prevent and respond to any and all future global disease threats.