When Aftab Kakar and his National Stop Transmission of Polio (NSTOP) team arrived in Lasbella in southern Pakistan to support a polio vaccination campaign, they learned some troubling news: at least 33 children, all under 5, had not received the polio vaccine.

As the NSTOP team lead for Balochistan Province, Kakar knew that a single child not vaccinated against polio could pose a public health threat. 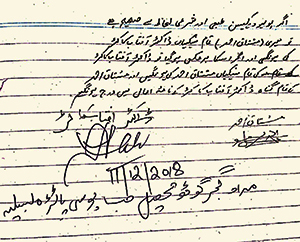 A note absolving an imam in Pakistan from any negative vaccine consequences.

Wild poliovirus recently returned to Pakistan and Afghanistan, and along with Nigeria, they are the three remaining countries with wild poliovirus. The continual movements of populations such as refugees, internally displaced people, nomadic/pastoral groups, people who migrate seasonally, and international business travelers in Pakistan and Afghanistan underscore the importance of eradicating polio from the region.

Also troubling for Kakar and his team was that district health authorities had taken the extraordinary step of calling law enforcement agencies to forcibly vaccinate the children in the village. The potential for forced vaccinations created an atmosphere of fear and resentment, negatively affecting polio eradication efforts. Parents worried that they would be jailed for not complying with vaccination mandates or that vaccines would cause polio or sterility in their children. The NSTOP team, made up of the top graduates of Pakistan’s Field Epidemiology and Laboratory Training Program (FELTP), was charged with addressing these challenges.

The FELTP graduates on Kakar’s NSTOP team immediately stopped health care workers from using police to force families to vaccinate their children. To convince parents to participate in the vaccination effort, the NSTOP officers knew they had to win the support of the influential imam (prayer leader) of the local mosque, whose opposition to the program heavily influenced parents. The NSTOP officers met with the imam and senior members of the community and discussed the benefits of the vaccine and the potentially devastating consequences of this crippling disease that attacks the brain and spinal cord and can cause paralysis in unvaccinated children. The NSTOP team also discussed the safety and efficacy of the vaccine. The officers addressed the imam’s concerns and successfully persuaded him to encourage vaccinations to proceed. As a result, with parental consent, all 33 children in the village were vaccinated. This approach has been successfully used in other Pakistani villages to get parental consent to vaccinate children.

Kakar explained the challenges of this work. “Though NSTOP officers face challenges of uncertainty, insecurity, and targeted killings, they effectively support the Polio Eradication Initiative Program through strong coordination with partners at all levels through good analytical and communication skills,” he said. “They are monitoring the supplementary immunization activities in the most challenging areas with dedication and without fear.” 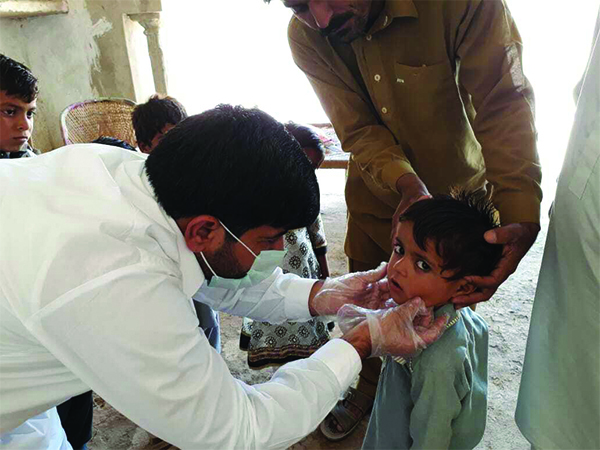 In neighboring Afghanistan, CDC is working with the government to create an intermediate level Field Epidemiology Training Program (FETP) to boost the country’s capacity for disease surveillance and outbreak investigations. The current FETP cohort is focused on involving fellow public health professionals in polio eradication and other vaccine-preventable disease activities. FETP’s cross-cutting health systems approach strengthens public health workforce, surveillance, and response capacity in a region with critical need for a skilled and supported workforce to eradicate polio.

CDC has provided unwavering support to Pakistan and Afghanistan in their fight against polio. Eradicating polio and supporting a strong public health infrastructure in the two countries will help the region eventually maintain a polio-free status and control other vaccine-preventable diseases.