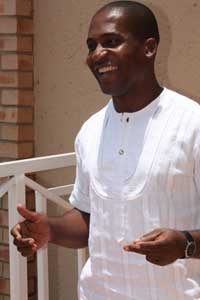 One of the Centers for Disease Control and Prevention (CDC) South Africa’s own team, Dr Ehimario U. Igumbor, an epidemiologist in the Epidemiology and Strategic Information Branch, made the cover page of the December 2013 issue The Nigerian Voice in celebration of his recent achievements. In 2013, Ehimario received the Nigerian Community Award for Academic Excellence in a ceremony commemorating the 53rd Nigerian Independence Celebrations hosted by the Nigerian Voice Newspaper in partnership with the Nigerian High Commission to South Africa.To follow is an abridged version of the article.

Prof. Ehimario Uche Igumbor is an Academician and Epidemiologist employed in the United States’ Centers for Disease Control and Prevention (CDC), Pretoria, South Africa. Through dint of hard-work and academic excellence, Dr. Igumbor rose rapidly through the ranks of Junior Lecturer, Lecturer, Senior Lecturer and Associate Professor of Epidemiology in a university academic career spanning almost 10 years. He holds a Bachelor of Science (Honors) degree from the University of Zimbabwe; a Masters degree in Public Health (MPH) specializing in Epidemiology and Biostatistics; and a doctorate degree (PhD) from the University of the Western Cape, South Africa.

Besides these academic attainments, Ehimario Igumbor parades several accolades and certificates which bear testimony to his outstanding scholarship. He is a recipient of several awards and in several prestigious competitive contests – in Nigeria, Zimbabwe and South Africa. He was only 12 years old when he was awarded a National Merit Certificate by the Nigerian National Mathematical Centre, Abuja.

While undertaking his BSc (Hons) degree at the University of Zimbabwe Medical School, he received the “Dean’s Award” and “University Book Prize” in successive years and graduated with awards of “Best Overall Academic Performance” and “Best Honors Research Student”. Further on, he passed his Masters Degree course work with distinction earning a Masters in Public Health degree when he was only 21 years old.

Before his 30thbirthday, he was appointed to the position of Associate Professor of Public Health by two Universities in South Africa but decided to take up a position with CDC while holding the title of Extraordinary Associate Professor of Public Health with his alma mater – the University of the Western Cape. In recognition of his “outstanding achievements as a healthcare educator”, Ehimario is listed in the 2014 (31st edition) of the prestigious “Marquis Who’s Who in the World” and he has maintained a profile listing in “Who’s Who in South Africa” since 2011. He was conferred Honorary Membership by the Golden Key International Honor Society and is A rated researcher by the South African National Research Foundation. A trailblazer, self-starter and an epitome of distinguished scholarship, Ehimario Igumbor has proven his mettle as a burgeoning academic giant in the African higher education landscape.

The Nigerian Voice Newspaper caught up with him in an exclusive interview.

As a professor of epidemiology, is Africa wining the fight against HIV and AIDS?

We have made significant strides in the fight against HIV and AIDS. In fact, there is surmounting evidence that increasingly HIV and AIDS now falls in the realm of a chronic manageable disease. There is work from Malawi and South Africa showing that life expectancy, (by that, I mean the average age an individual is expected to live), of adults who are infected with HIV is approximating that of those not infected. This is progress in that we can now say being infected by the virus does not equate death. But in the same breathe, in places where this is becoming the case, we must then deal with a chronic lifelong disease that further challenges public health.

So we talk of major successes, at least in South Africa, in the areas of impressive reduction in the transmission of the virus from mother to baby, improved health-related quality of life of HIV infected individuals on anti-retroviral drugs and an overall reduction in HIV deaths. The UNAIDS have reported that there were more than 700 000 fewer new HIV infections globally in 2011 than in 2001 and that Africa has cut AIDS-related deaths by one third in the past six years. What a difference a decade makes.

But this overall performance masks differences in the various sub-population groups throughout our countries. Poor underserved populations still exist where rates are markedly higher than the average. More so, the number of new infections continues to be high and with respect to risk behaviors, we seem to be hearing about reductions in the reported use of condoms. So you see, there is no room for complacence. HIV and AIDS remain quite a formidable health challenges.

On a very positive note though, we know much more about the epidemic than we ever did and there has been unprecedented high-level rally of support towards responding to HIV. We need to sustain this and in fact get more to make the currently mooted AIDS free generation a reality.

There are two on-going research projects for curing HIV at both the University of Cape Town and KwaZulu-Natal.  Is the cure for HIV in the horizon?

I wish I could be more prophetic about this one. You can imagine that I would wish for a cure already! Colleagues are researching and gaining new perspectives on a variety of interventions both in South African institutions and internationally. There’s the South African AIDS Vaccine Initiative (SAAVI) which is doing stellar work coordinating research, development and testing of HIV vaccines in South Africa in order to produce affordable, effective and locally relevant HIV vaccines. In similar vein, the Centre for the AIDS Program of Research in South Africa (CAPRISA) enjoys international reputation for leading current understanding of HIV pathogenesis, prevention and epidemiology. Their microbicide trials are noteworthy.

Our reality though is that there is currently no cure and perhaps we should, at least for now, desist from speculating on the timing for a “magic bullet”. We should rather dwell on how we can apply the cocktail of interventions we currently have and know about, in responding to the epidemic. Combination prevention efforts to limit any further spread of the epidemic in the first instance, and improved access to available treatment for eligible infected patients should be our priority. And with that should be health systems strengthening and support for interventions which address the social determinants of people’s health. These, (social determinants), are the true drivers of the epidemic in our continent.

Does Prof. Igumbor have a role model?

Yes, I have several role models and in different aspects of my life. My humanity and spirituality have been shaped by the trio of Nelson Mandela, Desmond Tutu and St. Augustine. Professionally, I have enjoyed mentorship from senior colleagues I have worked with over the years – Emeritus Professor David Sanders and Professor Thandi Puoane stand out for me. But many others too – worthy of mention are Professors Larry Obi and Abolade Awotedu who I look up to with great professional admiration.

Fundamentally, my world view has been shaped by my parents – my dad Mr. Sam Igumbor, and mum, Professor Eunice Igumbor, who have been incredible role models to me.

What is your message to your fellow Nigerians in South Africa (SA)?

I wish compatriots in SA would, as our anthem enjoins, rise to Nigeria’s call. I wish that we would recognize that we are Nigeria’s ambassadors through our everyday dealings. This way, immaterial of our current place in society, we maintain a moral focus and strive for our dreams. It truly is possible.

Published with permission from The Nigerian Voice (a free monthly Nigerian community newspaper). For the full article, visit www.thevoicesa.com.