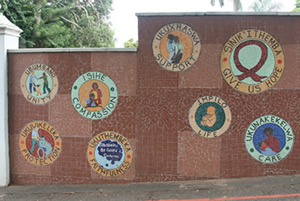 Medical male circumcision is one of the most effective ways of preventing new HIV infections.

Cato Manor is a township located 16 miles from Durban’s city center. It’s home to an estimated 93,000 people who settled in the area through mass invasions in the late 1980s and early 1990s. Cato Manor has been the hub of the political upheaval during the apartheid era. Today, Cato Manor residents include some of the poorest of the urban poor, and the area remains characterized by a high unemployment rate and social fragmentation. The visionary American missionary surgeon, Dr James McCord, opened McCord Hospital in May 1909 to provide medical care to the Zulu people of Durban, South Africa. The hospital is now a centre for health education, training and research locally and internationally, and has an impact well beyond its size and location.

One Cato Manor resident expressed his feelings about McCord’s services in a letter.

I hope this email finds you in good health. My name is Lindo Buthelezi, 24 years of age, from Cato Manor, [South Africa]. On October 16, 2012, I visited your clinic at McCord Hospital as a patient to do a circumcision.

I just want to applaud the entire team that was on duty today. Wow, that’s all I can say! The service and care I received—not only me but everyone that was present—was just amazing and world class.

Starting from the Security guard, he was sincere and welcoming, the receptionist was quick and polite, but most importantly the Counselling and HIV testing was so relaxing and informative, which I felt was the most crucial stage of them all.

In that plus-minus 20 minutes I spent in the counselling room, I can safely say I’ve realised the importance of taking care of myself and living my life with a purpose.

You know, as a young adult who’s from the township, I’m not going to lie. Doing an HIV test is probably the most horrific experience ever. But that guy eased me, with his slow and smooth flowing conversations leading up to the test. He prepared me well, and I was conscience of what I was doing and ready for whatever the outcome may have been. That moment … that short moment in there … grew in me and gave my life new meaning.

When I got upstairs, where the blood pressure tests are done, I also met a decent lady who treated me with the utmost care and gave me a short, unplanned, conversation about taking take of myself and the importance of using condoms.

I did the circumcision, which was a short pain-free session, done at the most hygienic and pleasant environment. The service was also outstanding. I didn’t even get to see the doctor, the way I was so relaxed laying facing up, while chatting to the assistant surgeon.

There’s so much I wish to say, but I’ll end up losing the plot of why I emailed you guys.

The point I’m trying to raise here is, things that concern a person’s confidential health status, together with a man’s manhood are sensitive issues, which can either make or break a person— depending on how the process is carried out. So it’s extremely important that people be treated the way you guys do.

I’ve been to public clinics and hospitals—and trust me—the entire process in a nightmare. They make you feel like you’ve committed a crime by visiting them. The public sector can learn a lot from you guys.

Just wanted to share my experience and let you know you’ve changed my life for the better and helped me turn a new chapter in my life.

I hope and pray you keep up the good work and change even more lives…This is what South Africa needs to grow and fight epidemics like HIV. Much love and appreciation.