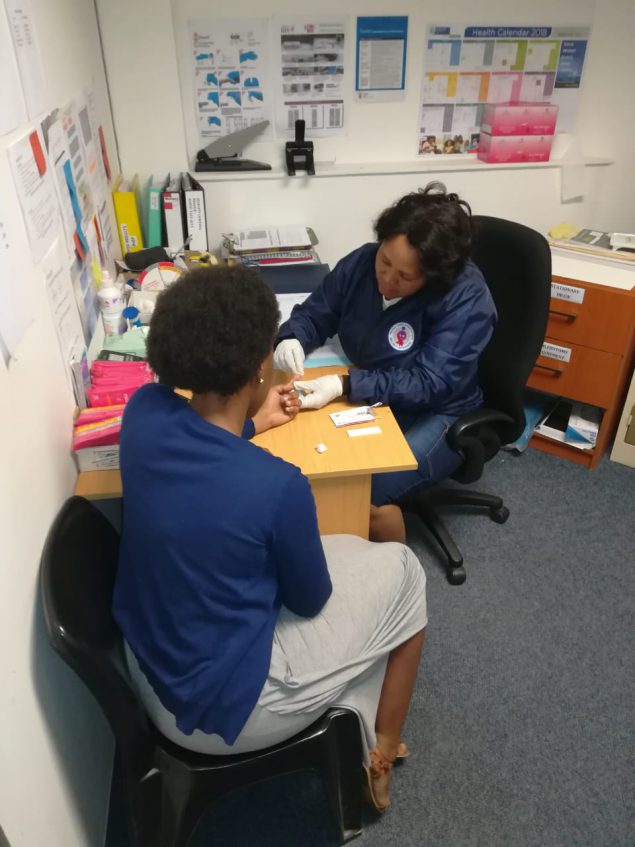 The World Health Organization (WHO) is determined to see the virtual elimination of TB and HIV by 2030. According to the 2018 WHO Global TB Report, approximately 322, 000 people contracted TB in South Africa in 2017. This speaks to the concept of “TB ANYWHERE IS TB EVERYWHERE”, underscoring the need to gain control TB and HIV among key populations, if we are ever to eliminate them in the general population.

But adherence is not always easy due to potential side effects of the medication, poverty, lack of food, lack of transport money in order to travel to healthcare facilities or other reasons.  Among the sex worker population, TB treatment adherence can become even more difficult due to factors such as poor living conditions and geographic mobility.

Adherence to PrEP (an HIV prevention option) is also an issue.  Side effects, pill fatigue (i.e. taking a tablet each day while not ill) and stigma (fear of being labelled HIV positive) all contributes to poor PrEP adherence.

Jackie (not her real name) is a 24yr old female sex worker living and operating along Edendale road in Pietermaritzburg. She visited the TB HIV Care’s mobile clinic on January 19, 2018 where she tested HIV negative. She was offered PrEP for preventing HIV infection. Jackie agreed, opted in for PrEP and a PrEP workup was done as per PrEP Guidelines.

Jackie did not return for her week’s follow up appointment, but returned for her one-month appointment. Test results for the liver functioning test from the initial appointment indicated a slightly raised enzyme, possibly due to her alcohol use.  She appeared well with no problems, was coping well with PrEP and reported no side effects.  She was counseled and informed of the effect substance abuse has on major bodily organs.  Repeat creatinine and an HIV tests were conducted and she remained HIV negative. A 3- month prescription for PrEP was issued.

Jackie returned on March 16, 2018 for her follow up appointment and PrEP collection. She stated she had not been feeling well. The health screen indicated TB symptoms (coughing for more than 5 days and slight weight loss). Sputa for GeneXpert was sent to the lab.  An antibiotic was prescribed and she was given a follow up date.

Based on her symptoms, an HIV test was done as well and her results remained HIV negative. Jackie’s TB results unfortunately came back as MTB POSITIVE – RIF SENSITIVE. On March 20, 2018, she was advised to come to the TB HIV Care clinic as soon as possible. When she arrived, she was informed of her TB result, counselled and referred on the same day to a National Department of Health (DoH) facility for TB treatment and further management. She began TB treatment, and was reassured by the DoH nurse that there is no problem between PrEP and TB treatment. She opted to continue taking her PrEP without fail.

However, when she came for her follow up appointment on May 11, 2018, she requested to stop PrEP as she felt there “were too many pills”.  HIV testing was done and she remained HIV negative. Jackie said that she would “come back to continue PrEP once I am discharged from TB”.

On September 17, 2018, Jackie returned to the TB HIV Care clinic and her TB card indicated that she had completed her TB treatment. She mentioned that she would like to resume taking PrEP, so an HIV test was conducted, and results remained negative. PrEP work up was done and she was reinitiated on PrEP.