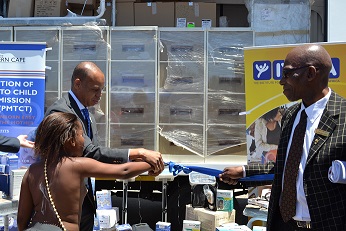 A portion of the equipment to be handed over to the Eastern Cape Department of Health. The equipment being distributed between now and February 2014 totals in excess of R3,5 million.

On December 5 2013, U.S. Ambassador Patrick Gaspard cut the ribbon on a handover of medical equipment at the Kwazakhele Community Health Centre (CHC) in Port Elizabeth, Eastern Cape. As part of the U.S-funded President’s Emergency Plan for AIDS Relief (PEPFAR), the Centers for Disease Control (CDC), partnering with the Institute for Youth Development South Africa (IYDSA), handed over the equipment to the Eastern Cape Department of Health (ECDOH) for targeted clinics around the province.

In commemoration of World AIDS Day, noting IYDSA’s approaching 10th anniversary and PEPFAR’s 10th anniversary, the U.S. ambassador and officials from the Eastern Cape provincial and local government presided over the donation of more than R3 million (approximately USD282,030) worth of equipment. The Kwazakehle Clinic will receive R68 000 worth of equipment in the distribution.

The Kwazakhele Community Health Centre first opened its doors in 1974 and is situated in a township of 150,000 people. Kwazakhele CHC has earned the respect of the community it serves and forms the backbone of health services for the area, acting as a lead cluster facility for 4 smaller primary health centers. 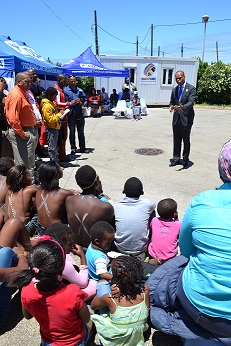 Ambassador Gaspard addresses the youth on the fight to get to zero new HIV infections at the handover of medical equipment to the Eastern Cape Department of Health at Kwazakhele Clinic, Eastern Cape.

The center started its first patient on anti-retroviral therapy (ART) in 2004. Healthcare workers at the facility treat over 500 patients per day, deliver 560 babies a month, maintain 4,882 adults and 251 children on ARTs, and serve a full range of primary healthcare services for the community.

IYDSA began its work with Kwazakhele CHC in 2010 and provided key technical support to enable the center to become a fully accredited and operational nurse_initiated management of anti-retroviral therapy (NIMART). The NIMART approach is a milestone for South Africa’s growing success in getting to zero new HIV infections.

Eight of the Kwazakehle Clinic’s 14 nurses have received NIMART training. IYDSA has mentored these nurses over a six-month period in the 54 required national health department core competencies, thus qualifying them to manage and troubleshoot a more complicated range of HIV/AIDS and TB treatment services without the direct support of doctors.

Prior to IYDSA’s mentorship to Kwazakhele, its nurses were unable to manage the current MDR-TB protocols; there was a lack of pediatric ART; patient registers were inaccurate and incomplete; key data was not recorded or reported; and expired drugs were found on the shelves of its pharmacy. CDC investment and IYDSA technical assistance has turned this picture around for this facility and the patients for which it cares.

IYDSA’s technical support of the Kwazakhele Clinic’s NIMART program has had truly ground-breaking and lifesaving impact which has also led to a broad integration of services, improved health outcomes, and a notably higher quality of patient care. IYDSA’s technical assistance has also equipped and empowered the nurses to better fulfill their Centre’s role as lead facility to smaller neighboring clinics in the area. 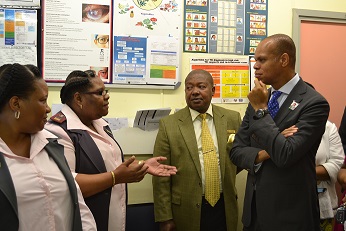