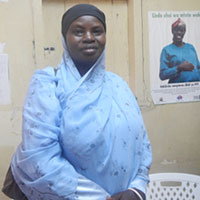 Souda, a Rwandan refugee, has benefited from the HIV care and treatment services available at Kakuma Refugee Camp.

On World Refugee Day, which took place on June 20, CDC visited Kakuma Refugee Camp to talk with refugees and clinicians about HIV/AIDS prevention and care in the camp. The following article details how CDC support has led to successful patient outcomes in refugee populations in Kenya.

Souda is a Rwandan refugee who arrived in Kakuma Refugee Camp in January 2005. Her friendly demeanor and open smile belie the magnitude of what she has seen through the years. The more recent chapters of Souda’s life begin with the journey she made to her current home, which was long and grueling. Souda left Rwanda in September 2004, passing through the Congo and Uganda before finding safety on the arid land of northwest Kenya more than four months later. However, the hardships Souda has endured are not limited to the persecution she faced in her native Rwanda or her daily life as a refugee in this camp of more than 120,000 people.

In 2005, only months after her arrival at Kakuma, Souda discovered she was infected with HIV. Prior to her diagnosis, Souda considered whether she might have the disease as a result of a tragedy in her family. Souda’s cultural group permits men to have multiple wives; her husband’s first wife died only weeks after their arrival in Kakuma due to an unknown illness. In addition, the children of her husband’s first wife had experienced many health concerns and Souda herself had begun to feel weak. Testing soon found that both Souda and the children had HIV.

The family is now receiving treatment through an in-camp program supported by CDC with funds from the President’s Emergency Plan for AIDS Relief (PEPFAR). Partnering with the United Nations High Commissioner for Refugees (UNHCR) and the International Rescue Committee (IRC), the program supports HIV/AIDS prevention, diagnostic services, care and treatment for refugees at Kakuma Refugee Camp in Kenya. This support is the sole funding that the camp receives for HIV/AIDS-related activities in the camp.

UNHCR primarily supports outreach and coordination with partners in Kenya, such as the Kenya National AIDS and STI Control Programme (NASCOP), while IRC plays a critical role in the provision of services in the camp. Data indicates that among the 23,086 adult residents of Kakuma, 1.2% are infected with HIV.

HIV Care in Kakuma by the Numbers

To reach both those who are infected and those who are at risk, IRC leads a multifaceted prevention agenda. This includes condom distribution and education on correct and consistent use; mobile HIV testing programs; the development of movies designed to raise awareness of the disease (starring camp residents); and outreach to sex workers and men who have sex with men. Care and treatment services include ongoing provision of medication and monitoring; distribution of food rations; education on prevention of mother to child transmission of HIV; and ongoing counseling. The program currently provides care and treatment to 244 refugees, or 87% of those infected with HIV in the camp. Thousands of others benefit from the program’s prevention activities and residents from the surrounding Turkana community are also able to take advantage of the HIV care and treatment services provided.

Souda has received tremendous benefit from the treatment and other services that the program provides, particularly in regard to counseling. After her diagnosis, Souda and her husband experienced significant stress in their marriage. Her husband refused to accept that he may also have HIV and needed to be tested. Peer counselors helped Souda to convince him that he needed to know his status and found he was also infected.

Today, the couple attends clinic visits together on a monthly basis. Their appointments include counseling on drug compliance and how to prevent the transmission of HIV in the event that they decide to have another child. The couple is now committed to going to the hospital for prenatal counseling if Souda becomes pregnant and they plan to deliver future children at the hospital rather than at home.

When Souda was initially diagnosed, she was fearful, but her participation in the program now makes her more assured and optimistic. She no longer wonders why she and the children are not well. The entire family feels the treatment has improved their health and overall energy levels. Even in the face of many hardships, a smile passes over Souda’s face as she considers the future: “We must continue to press on.”