A Pharmacist Motivated by Inspirational Women 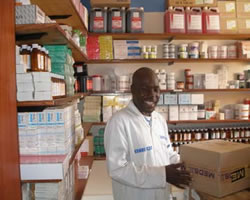 Fredrick Ochenge moves quickly and efficiently around Tabitha clinic’s small pharmacy, filling up bottles, counting out pills, and chatting happily with everyone he encounters. When he calls a patient’s name, they are met at the dispensary window by his wide smile and a warm greeting, as he carefully explains each medication’s use, dose, and precautions. It is instantly clear to all who meet him: this is not your typical pharmacist.

For the last seven years, Ochenge has worked at the Tabitha clinic, flagship project of Carolina for Kibera, a non-profit working to effect positive change among the residents of Kibera, Africa’s largest urban slum. Having joined the clinic during its early stages, Ochenge’s institutional memory paints a picture of a thriving grassroots project: ‘I have seen the clinic grow from a staff of two, to more than forty; from a one-room shanty to a beautiful building.’ How Ochenge ended up in that ‘beautiful building’ is a story marked by tragedy and triumph, and the incredible influence of two inspirational women.

The second youngest of eight children, all boys, Ochenge grew up in a rural village in Nyanza Province, where the disease burden is high and access to education is low. His mother died when he was only six years old, followed two years later by his father’s untimely death. The newly orphaned brothers were taken in by various family members, but struggled to overcome the significant challenges they now had to face. Ochenge was the only one who made it out of the village, thanks in large part to his paternal grandmother, whom he calls his greatest inspiration. ‘She was a traditional healer,’ says Ochenge, ‘and she is the reason I became a pharmacist.’ Though there were several other healers in the area, ‘she was the top one,’ he says. ‘I used to accompany her when she collected plants and bark for her medicines, which she taught me how to make and use.’

Besides encouraging his life-long fascination with medicine, Ochenge’s grandmother also instilled in him a strong sense of compassion and community responsibility. ‘Many people came for her services,’ he recalls. ‘Sometimes she would charge something small, but often she would treat them for free.’ Her kindness and work ethic made a lasting impression on the young Ochenge, who went on to pass Form 4 and complete his Diploma in Pharmacy Studies.

Not long after graduating, he met Tabitha Festo, a woman who shared his passion for helping others and who would quickly become like a mother to him. ‘We met at church,’ says Ochenge. ‘Tabitha heard me giving testimony in which I mentioned being a pharmacist. After the service, she pulled me aside and told me about her work. She asked if I would come for a visit, so we arranged to meet the following week.’

From the moment he stepped inside Rye Medical Clinic (renamed Tabitha clinic in 2005), Ochenge knew he had found something worthy of his time and skills. ‘The pharmacy,’ he says, ‘was a real mess. At that time, the clinic relied entirely on donations, so there were boxes of donated medications scattered everywhere.’ The clinic did not yet have a pharmacist, and upon inspection, ‘I found that many of the medications were expired.’ 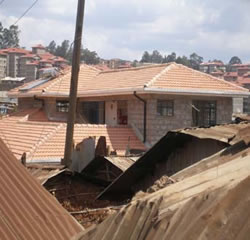 A view of the Tabitha clinic in Kibera

Ochenge threw out the bad drugs, organized the good ones, and started dispensing what remained to Tabitha’s patients. From that first visit, he began working in the clinic 7 days a week. ‘I worked every day, without leave, for almost three years,’ he says. ‘There was no one else working in the pharmacy, so how could I take a vacation and allow people to suffer?’

Even more remarkable, however, is that for the first two years, Ochenge worked full time as a volunteer. Yes, without a salary.

It wasn’t until the CDC arrived that the clinic had enough funding to officially hire Ochenge. He initially worked as a CDC Community Interviewer, but soon returned to his first love, the pharmacy, where he has remained as Chief Pharmacist until today.

A few months after their first meeting, Tabitha Festo passed away, but her legacy continues to influence Ochenge’s life. The experience of working for a successful development project has inspired him to return to school, where he is currently studying for a Bachelor of Healthcare System Management, and hopes to later complete a Master of Public Health. His goal is to someday manage, not just the pharmacy, but the whole clinic.

‘I knew Tabitha,’ he says. ‘I knew what she wanted. She wanted people to have free medical care. This was her dream. I want to fulfill the dream she had.’