Stomping Out Malaria in Pregnancy 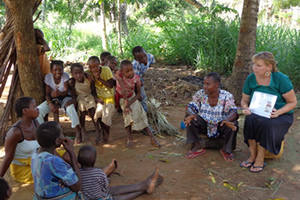 Launched in 2005, the President’s Malaria Initiative (PMI) is a key component of the U.S. government’s global health strategy with the goal of reducing by half the burden of malaria in at-risk populations in 18 African countries, including Kenya. PMI is an interagency initiative led by the U.S. Agency for International Development (USAID) and implemented together with CDC. Partnerships are at the heart of PMI’s strategy, and PMI works closely with Peace Corps through the Stomp Out Malaria in Africa Initiative. PMI-Kenya currently supports three Peace Corps volunteers to implement malaria activities at the community level.

Kelly, accompanied by a community health worker, regularly visits pregnant women in their homes to check on them and provide education and counseling about preventing malaria. She emphasizes the importance of attending antenatal care clinic, getting doses of a drug called sulfadoxine-pyrimethamine every scheduled visit after quickening (called intermittent preventive therapy in pregnancy or IPTp), and sleeping under a long-lasting insecticide treated bed net. Kelly has followed 11 pregnant women in Takaungu and will continue weekly visits over the course of these women’s pregnancies.

Each year, approximately 1 million Kenyan women who become pregnant are at risk of getting malaria. Pregnant women are especially susceptible to malaria. Malaria can result in devastating effects on the health of the mother and baby including maternal anemia, premature delivery, low birth weight and death.

The Kenya National Malaria Strategy recommends two main interventions to prevent malaria in pregnant women who live in malaria endemic areas: use of insecticide-treated bed nets and IPTp. Pregnant mothers receive a free bed net during their first antenatal care visit at public health facilities and IPTp treatment doses at each scheduled visit after quickening. In 2012, the President’s Malaria Initiative in Kenya procured 2.7 million bed nets for distribution through antenatal clinics and supported the training of over 400 health workers on malaria in pregnancy.