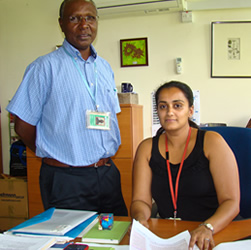 In late 2007, researchers at the KEMRI/CDC Field Research Station in Nyanza province in the western part of Kenya noticed a worrisome change in the rate of malaria infections. Malaria in this region had been declining since the 1980’s but was now rising again for reasons that were not clear.

To look at why this was happening we start thirty-two years ago, at the beginning of collaboration between CDC and the Kenya Medical Research Institute (KEMRI), when a research facility was built in Nyanza province to focus primarily on malaria research. Located on the coast of Lake Victoria, Nyanza province was, and still is, the hottest area in Kenya for malaria infections. And eventually the Health and Demographic Surveillance System (HDSS) was created which precisely monitors the health and socio-economic well-being of 225,000 people in this area every 4 months.

In the mid 2000’s survey data began to show a decline in malaria parasite prevalence. It seemed three interventions coincided to facilitate this decline. First was the implementation of insecticide treated bed nets in a landmark bed net study among pregnant women and children, reaching 90% coverage at one point, then there was the adoption of Intermittent Presumptive Treatment in pregnancy and lastly a policy change to use a more effective malaria medication. Over time, the effects of these three interventions have been dramatic. Malaria in under 5 year olds living in the communities as measured in the HDSS went from 80% in the 1980’s to 28% by 2008.

Then, in 2009, the community prevalence in under 5 year olds increased to 39% and has remained there to this day. “We were not sure what was happening and began a systematic evaluation of our data,” said Dr Meghna Desai, Deputy Director for Science and CDC Senior Technical Advisor to the Malaria Branch. “We wanted to know, for example, was there a change in bed net usage in the community or were there medicine stock outs in the clinics and hospitals. It turns out that, yes, there were sporadic stock outs and suboptimal usage of ITNs especially among school-aged children who seem to bear the highest prevalence of malaria infections in recent surveys.” But these things alone do not explain the sustained high levels of malaria infections.

Dr. Simon Kariuki, Chief of the KEMRI/CDC Malaria Branch said, “We also looked at what was happening in the mosquito population and found the type of mosquitoes carrying malaria parasites had changed since the 1980’s.” Originally, the A. funestus and gambiae mosquitoes were the dominant carriers but were almost completely wiped out by the high coverage of insecticide treated bed nets. Very quickly though they were replaced by the A. arabiensis mosquito as the primary carrier. Are the original malaria vector species making a comeback? “It turns out there is actually an increase in the A. funestus mosquito population, but it is still unclear right now if this is a contributing factor.” said Dr Kariuki.

With these new clues on hand scientists from KEMRI/CDC organized a meeting with representatives from CDC in Atlanta, the Kenyan Ministry of Health, the Presidents Malaria Initiative, and others. Many attending scientists had personal history with the field research station over the years. What emerged was a sense that there might be a ceiling on the effectiveness of currently accepted interventions and to push prevalence down further a new generation of interventions would be needed.

So a proposal created by KEMRI and CDC outlining a large-scale study took shape to look at some of these new possibilities. One intervention showing promise is Indoor Residual Spraying (IRS). A recent KEMRI/CDC study appears to be highly effective but is expensive and logistically difficult to implement at a wide-scale. And there is new thinking about transmission too. Thirty percent of the population in the HDSS may have malaria parasites in their blood but show no symptoms. These asymptomatic people are hard to locate yet are still able to transmit parasites to a biting mosquito.

Dr Desai said, “One of the ideas outlined in our study proposal is to test and treat everyone in the community for malaria 2-3 times in a year, this way we’d find and treat those asymptomatic people. We’d also be able to uncover transmission hotspots, if they exist.” Hotspots are pockets of high infection rates in a community. Hotspots have been identified in areas with lower malaria prevalence, like the highlands of western Kenya, but it is not known if they exist in areas with high and continuous malaria transmission in the lowlands. “If we found hotspots in the HDSS we think this might be the most cost effective and impactful place to implement Indoor Residual Spraying.” Dr Kariuki said.

Support for this new malaria study is building, as everyone is aware that Nyanza’s stubborn malaria problem is not unique. All over Africa there are pockets where malaria prevalence remains high in spite of interventions. Dr Kariuki said “In Nyanza, the current interventions have been able to push prevalence down to 40% overall. We think a new intervention, possibly ideas outlined in our proposed study, could have the impact ITNs had in the late 1990s and early 2000s. If they are proven effective adding them to current practices could dramatically reduce prevalence. And, maybe by then a vaccine will be available to extinguish what remains.”