Tuberculosis: The world cannot afford another phase of neglect 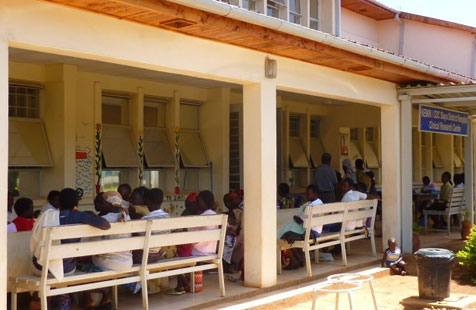 A view of the clinic in Kisumu, Kenya

Cutting edge research is underway in Kisumu, Kenya, to find new ways to put an end to deaths from tuberculosis.

“My baby, whose name is Hope, was very ill and could not sit at 8 months of age. When she kept getting sicker, neighbors and friends contributed money to take me and my child to our rural home to await her death. Thanks to the DOT program and TB treatment, baby Hope is now strong and healthy. People still wonder what I did to her.”

This mother is just one person with reason to be thankful for the KEMRI/CDC community-based TB treatment support program known as DOT. This is one of many of the research and program activities underway at KEMRI/CDC, which is a research and public health collaboration between the Kenya Medical Research Institute and the U.S. Centers for Disease Control and Prevention.

Unfortunately, when many people think of tuberculosis, they think of it as a disease that was relevant to their grandparents – something that was a problem a long time ago but now is no longer a big issue. Would it surprise you to know that EVERY HOUR, 200 people die of TB worldwide? That about 2 million people die annually of this disease that has been around for centuries, if not millenia? That this preventable, treatable disease still is the leading killer of people with HIV and may kill more women annually than childbirth? Sadly, these are the facts. Every year, about 9 million people become sick with TB, and 2 million of them die. Children are orphaned, and family breadwinners are sidelined. Economies in resource limited countries are so impacted that a World Bank study finds that every dollar invested in TB control would result in $10 of economic benefit in the country where the investment took place.

So the situation is bad. But how did it get this way? The answer is complicated, but much of it can be summed up in one word – neglect. In the latter portion of the 20th century, people thought TB was under control, and efforts to address it faded. Believe it or not most of the world still relies on the same diagnostic test developed by Dr. Koch in the 1880s, in spite of the fact it misses the diagnosis in about half the patients with the disease. The drugs used for treatment were developed in the 1950s and 1960s and require patients to take 6 months of up to 4 drugs per day. There is no effective vaccine. In addition to all of this, the tools available were not implemented very well in most places. This has left TB spreading out of control, taking lives at will, and developing resistance to our current treatments. The bacteria has actually evolved more quickly than the science aimed at stopping it, and now there are some strains that can’t be treated successfully with any of the drugs we have, leaving patients to a fate you could have expected before antibiotics were developed.

In the past 10+ years, scientists have done more to address this plague. New drugs are being developed, and new diagnostic tests are emerging. There is even hope that a vaccine could be coming. TB programs around the world have worked to try to improve programs to have as much impact as possible.

Staff at KEMRI/CDC in Kenya are working hard to address both the science and program gaps in TB control. Currently a new TB vaccine is being tested. Just recently, the first part of the study that was designed to verify it was safe and well tolerated was completed, and soon thousands of infants in Kenya and other sites in Africa will be enrolled in a study to see if it can prevent TB. In January 2012, in another new study, KEMRI/CDC will start enrolling patients to look at another new TB drug to see if it might make a shorter and simpler treatment for TB possible. The site also works on laboratory diagnostics, including testing a new TB test to see how well it works in people with HIV. It’s called the Xpert MTB/Rif Assay, meant to be simple, fast, and accurate, there. Finally, KEMRI/CDC works closely with the government of Kenya TB program to help implement the best possible policies and practices.

Much remains to be done. Most importantly we must avoid the mistakes of the past by keeping our efforts to end TB strong. The world cannot afford another phase of neglect. We know by partnering with governments as well as affected communities in innovative ways more progress can be made improving programs and the tools available for diagnosing, treating, and preventing TB and lives will be saved.

Kevin Cain works for CDC-Kenya and is the Chief of the tuberculosis branch for KEMRI/CDC in Kisumu, Kenya.

To see more on the work of the CDC in Kenya, go to the GHFN videoExternal.