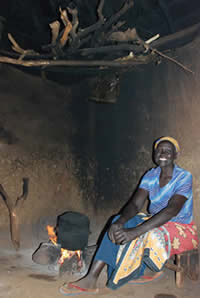 Secretary Clinton launched the Global Alliance for Clean Cookstoves in 2010 with the aim of saving lives, improving livelihoods, empowering women, and combating climate change by creating a viable commercial market for clean and efficient cookstoves and fuel. The Centers for Disease Control and Prevention (CDC) has joined the Alliance, which aims to help 100 million households adopt cleaner cookstove alternatives by 2020 through scientific validation of health benefits—CDC’s role—and novel marketing initiatives that will aid local economies to help make clean-burning cookstoves available to all who need them.

Martha Gembo lights a cookstove fire in her home in rural western Kenya. She kneels on the dirt floor next to the stove’s clay foundation, pushing thin sticks of wood into a side opening. She lights a match, places it on sticks visible from inside an embedded ceramic cylinder and a fire begins to grow. The smoke curls up and out a small window cut above the stove. Martha’s ceramic cookstove looks very different from the 3-stone fire pits traditionally used in this area of rural Kenya. This upesi jiko (Swahili for ‘quick stove’) is one of many improved cooking technologies being tested in impoverished communities throughout Africa, Asia, and Latin America. 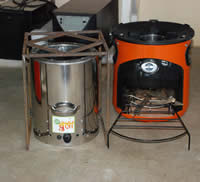 New stove technologies being tested by KEMRI/CDC, SWAP, and Berkeley Air in 50 households

The Kenya Medical Research Institute/Centers for Disease Control and Prevention (KEMRI/CDC), in partnership with the Safe Water and AIDS Project (SWAP) and Berkeley Air Monitoring Group, is currently evaluating six improved cookstoves with the potential of lowering indoor air pollution in 50 households in two villages in Nyanza Province. The study will identify stoves with high acceptability and investigate the short term effects of these stoves on indoor, outdoor, and personal air pollution exposure reduction through structured interviews, focus groups, and kitchen performance tests. Although the health impact of these new stoves have not been fully evaluated yet, Martha, a field officer for SWAP, attests that community members have reported improved household air quality and fewer burn injuries. Martha also says that the many of the new stoves consume much less wood than an open fire pit, translating to less time spent collecting firewood. 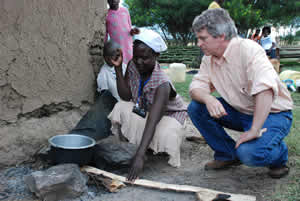 Jacob Moss, Director of the U.S. Cookstoves Initiatives at the Department of State, visiting households participating in the study

According to the Global Alliance for Clean Cookstoves, over 40% of the world’s population cooks with open fires inside their homes, using biomass like wood and charcoal for cooking fuel. Poor indoor air quality is a recognized risk factor for acute respiratory infections in children and a known risk factor for respiratory diseases in adults. Because women are overwhelmingly responsible for cooking, they – and their young children – are the ones most affected by harmful pollutants from smoke. The World Health Organization estimates that nearly 4 million people worldwide die prematurely each year from illnesses attributable to household air pollution, including common respiratory diseases like pneumonia.

Not only is the health toll staggering, but there are also other costs imposed by traditional cookstoves. It is estimated that on average women in developing countries walk over 10 miles and spend more than 30 hours per week collecting firewood. Those who purchase wood or charcoal spend over a third of their annual income on fuel.

While cookstove technologies are up-and-coming, not all stoves address the triad of issues: some are efficient, reducing fuel consumption but not dramatically reducing emissions or particulate matter; others are clean, reducing smoke, especially black carbon, and particulates, but not enough to lead to measurable health benefits. What is needed now for this relatively new sector is applied research – studies about factors that drive adoption, finance models, and particularly the long-term climate and health benefits.